Keith Tidball practices what he preaches.

A former Army infantry officer, Tidball carries a twenty-pound backpack wherever he goes. It contains, among other things: water, a first aid kit, a radio, a flashlight, a GPS, one Meal Ready to Eat, and a gizmo that charges his phone and laptop via solar power. “I can pretty much respond to anything right out of this bag,” says Tidball, PhD ’12, a senior extension associate in the Depart­ment of Natural Resources. “Even if I’m not using it all the time, the backpack is symbolic of the mindset I’m trying to maintain. After the third tropical storm to hit New York in a year, people are realizing that it might not be a bad idea to have a few of these things around the house.” 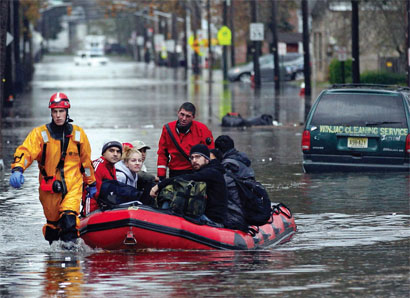 Tidball is state coordinator for the New York Extension Disaster Education Network (NY EDEN), a Cornell-based program devoted to helping residents prepare for, survive, and recover from all manner of calamities. Run through Cornell Cooperative Extension (CCE), NY EDEN aids officials, municipalities, and individuals, often tapping the University’s research acumen for needed information—from the effects of post-storm salinization on farmland to the potential hazards of having untold gallons of milk wash into rivers from flooded Upstate dairies. The organization is part of a national EDEN network, headquartered at Louisiana State University, that has branches at each state’s land-grant school. “Whether or not something is a disaster is a purely social phenomenon,” says Tidball, who did his dissertation on the effects of Hurricane Katrina on New Orleans. “There are hazards; hurricanes and earthquakes have happened since the beginning of the Earth. Whether or not they become disasters depends upon the culture. It’s going to be less of a disaster if there’s a culture of readiness and resilience—to bend and not break.” 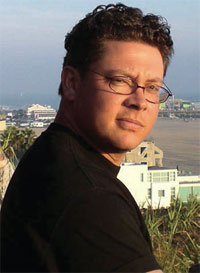 NY EDEN’s website (emergencypre paredness.cce.cornell.edu) offers a wealth of information and resources pertaining to a wide variety of threats, from infectious diseases and food-borne illnesses to radiation leaks, fires, and terrorism. Its section on power outages, for example, includes the phone numbers of the companies that serve New York homes; information on the safety of portable generators and on preventing carbon monoxide poisoning; and fact sheets about staying warm in an unheated house, food safety in the absence of refrigeration, and more. The section on “animals in emergencies” includes links to the ASPCA and American Humane Association and information about such illnesses as mad cow disease, foot and mouth disease, and avian influenza. “What I love about EDEN is that it provides ready-to-use materials that we can pass on to leaders in our community,” says Ronald Bunce, executive director of CCE for Oneida and Madison counties. “They have direct, tangible resources that we’re able to use rapidly, often at a time when things are rather chaotic and people are trying to figure out how to cope beyond the basics of food, clothing, and shelter.”

As Hurricane Sandy approached the state in October 2012, NY EDEN offered information on everything from evacuation orders to airline ticket-change policies. Last March, when a Herkimer County man killed five people and dug in for a two-day standoff with police, NY EDEN kept residents apprised of the “active shooter” danger via real-time updates on social media. Over the summer, as heavy rains pelted the state, the NY EDEN Facebook page offered a constant stream of updates on flood warnings, crop damage, “boil water” orders, and more. “We’re trying to fill the gaps, as we watch what FEMA or the Red Cross is putting out,” Tidball says. “As the disaster’s unfolding, we end up being a clearinghouse of information, a central node.”

‘We’re trying to fill the gaps, as we watch what FEMA or the Red Cross is putting out. As the disaster’s unfolding, we end up being a clearinghouse of information, a central node.’Tidball regularly monitors long-range forecasts; when extreme weather is in the offing—say, two weeks before a hurricane is on track to strike the state—he puts NY EDEN leaders on alert. Three days in advance, with the event a virtual certainty, the group assesses what resources will be needed most and coordinates with emergency managers in Albany. By one day prior, NY EDEN is sending out alerts and updates by Facebook and Twitter. In the aftermath of a disaster, the organization offers links to resources on recovery and rebuilding, such as advice on preventing mold in water-ravaged homes or on talking to children about tragedy. “It’s an important and effective service that we provide for state officials, and also for individuals,” says Helene Dillard, a professor of plant pathology and the longtime director of CCE. “It’s hard to appreciate it until something strikes—but when it does you realize, Wow, this is really great information.”

Dillard recalls the case of a man who contacted the organization during Hurricane Sandy trying to find out where FEMA had set up shop in his area, prompting NY EDEN to put out a tweet listing the federal agency’s locations. “People were so happy to get that information—and we thought everybody had it,” Dillard says. Then, the same man inquired if there was a government program that helps residents replace appliances lost in a disaster. “Keith said yes, there was,” she recalls, “and I didn’t even know about that.”

During and after a disaster, NY EDEN offers a boon to state and federal agencies: the perspective of CCE, which has a presence in each of New York’s sixty-two counties. As agencies marshal a response, CCE staff can provide essential facts. Which roads are impassible? What bridges are out? Are floodwaters still, or are they dangerously rapid? “Since we have an office in every county, we have eyes on the ground,” says Rod Howe, chair of the NY EDEN advisory board and assistant director of CCE. “Not many organizations have this kind of statewide network.”

But perhaps the most salient letter in the group’s acronym is the second “E”—reflecting its underlying mission to educate New Yorkers on how to protect themselves and their families when disaster strikes. With decades of relative calm between the duck-and-cover days of the Cold War and our current era of extreme weather, Tidball says, it isn’t always easy to get Americans into a be-prepared mindset. “Surprise and change are the norm—though for a little while we duped ourselves into thinking it was otherwise,” he observes. “It’s a challenge to develop a culture of readiness. We’re still in a culture of ‘It can’t happen to me.’ “