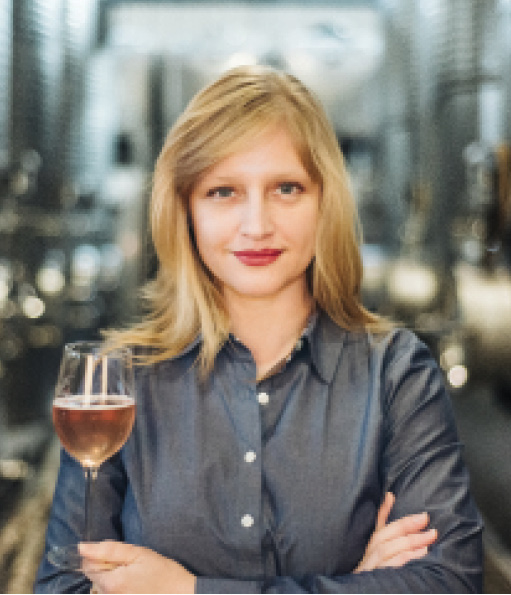 In winemaking, “terroir” refers to the distinct character that the soil, climate, and topography of the grape-growing land give the resulting libation. With Brooklyn Oenology, Alie Shaper ’95, BS ORIE ’96, is offering a spin on that concept.

The wines that Shaper creates aren’t actually made in Brooklyn but at a custom-crush facility on the North Fork of Long Island. And of course her grapes aren’t grown in the borough; they come from around New York State. But the winery aims to capture the ethos of Brooklyn—that rapidly gentrifying enclave that’s home to myriad artists, musicians, writers, and makers of craft beverages and artisanal foods. “It occurred to me one day, out for a walk and appreciating the neighborhood, that wine was something that could be done here,” she says. “There was something to celebrate here, something to call ‘Brooklyn terroir.’ I wanted it to be about what it means to be a part of this community, the color and flavor of where we’re from.”

A Long Island native, Shaper studied engineering on the Hill, earning a degree in operations research—and getting her first extensive exposure to wine in the Hotel school’s ever-popular course. She worked in Silicon Valley after graduation, including a stint designing in-helmet informational displays for fighter pilots, and continued her informal enology education with tasting trips to California wine country. After returning to New York she worked in a Hudson Valley tasting room, which led to a job in a Manhattan wine store and other positions in the industry; her training as a winemaker has included both on-the-job apprenticeships and Cornell Cooperative Extension seminars. She founded Brooklyn Oenology in 2006 and opened her own tasting room in Williamsburg the following year.

But like so many Brook­lynites, Shaper has found the borough’s renaissance to be a double-edged sword. Not only have rising residential costs necessitated a personal move from Williamsburg to the North Fork, but in November she closed the tasting room, spurred in part by the gentrification that has sent commercial rents into the stratosphere. She’s still making wine at the North Fork facility, selling her Brooklyn-inspired beverages online, and running a wine consulting business—but in terms of a retail presence, she’s contemplating her next move. “Will I reopen in Brooklyn?” she muses. “I don’t really know.”

Producing about 6,000 cases a year, Shaper sells three of her own brands under the Brooklyn Oenology umbrella, priced from around $15 to $45. (A fourth, Saltbird Cellars, is created by one of Shaper’s winemaking colleagues.) Her main brand, BOE, features distinctive labels reproducing work by Brooklyn artists. BOE wines include whites, reds, and rosés, such as a 2013 Pinot Gris sourced from Finger Lakes grapes and a 2012 Merlot sourced from the North Fork. BOE also offers orange wine, whose name refers not to the fruit but to the beverage’s color. “You soak white wine grapes with their skins and seeds, and they’ll impart color anywhere from a gold to a deep amber-copper,” she explains. “It can have a beautiful nuttiness and a flowery aroma, but it’s quite dry. It goes well with things like cured meats, roasted vegetables, and aged cheeses.”

Under a second brand, Shindig, Shaper produces moderately priced wines including sparkling whites and rosés. Her boutique brand, As If, comprises higher-end offerings including the 2014 Serendipity, a blend of Chardonnay, Viognier, and Sauvignon Blanc; priced at $45, it garnered 90 points from wine maven Robert Parker, who dubbed it “beautifully focused” with “good concentration coupled with a fruity finish.” Says Shaper: “I love that winemaking is both scientific and creative. It speaks to both sides of my brain.”