Toward the end of the 2014 Emmy Awards ceremony, Debra Birnbaum ’92 was in crisis mode. As executive editor for TV at Variety—the trade publication long considered the showbiz industry’s bible—she’s responsible for the magazine’s traditional “morning after” coverage, where a winner is interviewed and photographed in the early hours after the ceremony. The problem? None of the nominees she and her team had bet on as likely winners—and arranged next-day interviews with—ended up with a trophy. 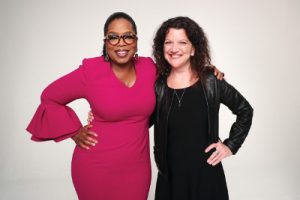 So Birnbaum came up with a last-minute solution to feature actress Allison Janney, the “West Wing” veteran who’d scored a rare double win that night for her roles on the CBS comedy “Mom” and the Showtime drama “Masters of Sex.” There was just one hiccup: Birnbaum needed to find her. “So I’m running around backstage like a crazy person, holding my heels in one hand, with my phone signal going in and out and the battery dying, saying, ‘Anyone seen Allison Janney? Anyone seen Allison Janney?’ ” In the end, she managed to track down the actress for an interview and photo shoot. “That’s the glamorous life of a magazine editor,” the former CALS communication major says with a laugh. “Basically I’m a paid professional stalker.” 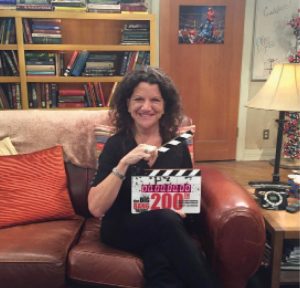 For Birnbaum, who oversees television coverage for Variety’s weekly print edition and website, Emmy night is the culmination of a year’s worth of reporting on everything related to the small screen. She spearheads thirteen special issues devoted to the awards show and hosts a weekly podcast where she interviews TV’s biggest writers, producers, and stars. And in addition to editing breaking news and daily features by other staffers, she contributes stories of her own—profiling such bold-faced names as Oprah Winfrey, Nicole Kidman, “Scandal” star Kerry Washington, and late-night host James Corden. “I always say this about the stars: the ones who have been around for a long time have so much more perspective. They know how hard it’s been to get to where they are,” she says. “Those are the great interviews.”

Birnbaum as an extra in Mad Men.
Photo: Justina Mintz/AMC/Lionsgate

Birnbaum also has a particular love for highlighting showrunners—the creative forces behind programs such as “Game of Thrones,” “The Crown,” and “Better Call Saul.” She had such a good relationship with “Mad Men” creator Matt Weiner that he invited her to be an extra on the series. (She appeared as a secretary at the Sterling Cooper ad agency—outfitted in a Sixties-era print dress, bright orange lipstick, and bouffant wig—in a two-minute scene that took four hours to shoot.) “My big moment was carrying a folder back and forth,” she says. “I had a new appreciation for what it’s like on a TV set, because you do a take over and over again.”

After more than twenty years covering entertainment, including seven as president and editor-in-chief of TV Guide, Birnbaum is regularly asked to moderate panels for industry organizations like the Television Academy, the Screen Actors Guild, and the Paley Center for Media. In May alone, she hosted live conversations with cast members and producers of six shows including “Speechless” and “Orange Is the New Black.” “That’s the hardest part of my job,” she says. “You have to do your homework and come prepared with lots of questions.” 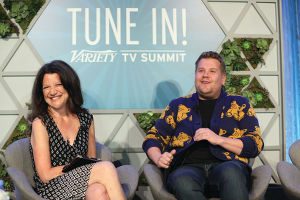 Birnbaum’s beat has become more demanding in recent years, with the explosion of programming on a multitude of networks and streaming services. When she first started covering TV, she watched almost every episode of all prime-time shows on the air. That’s now impossible, with more than 450 scripted series currently in production. So Birnbaum has colleagues stay on top of genres like sci-fi and reality TV—”not my thing”—though she’ll watch the premiere of each show “just to stay conversant.” But she says one major benefit of the abundance of shows is more diverse storytelling, praising current offerings like “Atlanta,” “Master of None,” “Black-ish,” and “Insecure.” “There’s such a hunger for different kinds of programming and different voices,” she says. “It’s becoming trite to say, but television is the new independent film.”

A New York native, Birnbaum got her start in journalism at the Daily Sun, where she snagged a regular slot writing about current events in her first year. “I don’t even know how I got the column as a freshman,” she recalls. “I walked in the door and sold them a bill of goods.” A big break came as a junior, when she scored an internship at Virgin Atlantic’s in-flight magazine while studying abroad in London. After graduation, she worked for Redbook, the New York Post, US Weekly, and more. By 2008 she was at the helm of TV Guide, where she conceived the popular “Fan Favorites” annual cover contest and developed the “Hot List” issue. But in 2014, with print magazines struggling, Birnbaum was let go as part of a round of layoffs, a reversal she calls “heartbreaking.” But she landed at Variety two months later, moving away from her home state for the first time. “Obviously, the TV business is very much based in L.A., so I always had in the back of my mind: Would I, should I, could I ever make that move?” she says. “I miss my family and friends—but being in the belly of the industry has benefitted my career tremendously.”

Birnbaum’s picks for some top-notch TV

Among Debra Birnbaum’s all-time favorites are much-lauded shows like “M*A*S*H*,” “The West Wing,” and “The Wire.” But she also highly recommends catching up with these lesser-known series:

“Fleabag” (Amazon): “To describe it is to give it away, but I’ll simply say this comedy surprises at every turn, with its warped, witty humor.”

“The Staircase” (Sundance): “Before there was ‘Making a Murderer,’ there was this true-crime documentary about Michael Peterson, who was suspected of killing his wife.”

“The Leftovers” (HBO): “This potent drama, which just wrapped its three-season run, expands on the novel, imagining a world struggling to rebound after 2 percent of the population disappeared—creating a powerful, poignant statement about life and loss.”

“Rectify” (Sundance): “A death row inmate is released on a technicality, but is he innocent? This quiet, tender exploration of the prison system and its fallout on the lives of all involved leaves a
lasting impression.”

“The Missing” (BBC/Starz): “Each season of this mystery series—which charts the disappearance of a child—is connected only by the detective, Julien Baptiste. But each case is compelling in its own right, with twists you’ll never see coming.”