Bayer wanted each Saxbys to have its own décor, to create a distinct vibe at the chain’s cafés—even those in the same city. Saxbys at Drexel.
Photo provided

When you walk into the corporate headquarters of Saxbys, the Philadelphia-based chain of cafés run by Nick Bayer ’00, someone will immediately jump up and offer to make you a latte, or whatever bean-based beverage strikes your fancy. A coffee bar runs the length of one wall of this open, loft-like space in the city’s design district. And since it’s ingrained in the company’s ethos that all employees—even those who don’t actually work in the stores—be trained in basic barista skills, everyone in the room short of Bayer’s toddler son can pull a respectable espresso shot and transform milk into foam.

You’d think, then, that Bayer got into the café business because he was a serious coffee aficionado—but in fact, he didn’t even drink the stuff much before opening his first Saxbys in Atlanta in 2005, when he was all of twenty-six. For Bayer, the draw was realizing a long-held dream to run his own business—and to work in an industry that he viewed as being all about human interaction, his forte. “I’ve always loved people. It’s the thing I’m most passionate about—being around people and talking to them,” says the former government major, the first in his family to go to college. “And as a kid who grew up on the South Side of Chicago and went to Cornell, I have friends across all spectrums of life. So if I was going to create a business, I wanted every type of friend I’ve ever had to feel welcome in it.”

These days, Bayer’s firm is no longer officially a coffee company. Last spring, it dropped the word “coffee” from its name and changed its logo from a steaming cup to a hot air balloon (though a cup still comprises its basket). The idea, Bayer says, was to reflect the fact that traditional coffee drinks had become a minority of the business—only 13 percent of sales. “We were selling smoothies and kombucha and pressed juices and breakfast sandwiches,” says Bayer, a longtime entrepreneur in residence at the Hotel school who makes regular visits to campus, logging same-day round-trips from Philly to Ithaca. “Who we had become operationally and culturally had surpassed the name ‘Saxbys Coffee.’ And it simplified our business too much; people could say, ‘I don’t drink coffee, so I don’t belong there.’ ”

Since Bayer opened that first store more than a decade ago, right across the street from a bustling Starbucks—figuring, with youthful bravado and more than a little naiveté, that if he could make it there he could make it anywhere—Saxbys has grown into a company with 400 employees, operating twenty-seven locations in five states plus Washington, D.C. With the aim of doing well by doing good, Bayer has sought to nurture an enlightened corporate culture, starting with a mission statement to “make life better”; the company’s six core values (which include “Serve yourself by serving others” and “Live with pride, passion, and purpose”) are emblazoned on store walls. “We don’t need another coffee company in this world,” he says, “but we need a company that’s based on humanity, that’s focused on making life better for its guests, its community, and its team members.” 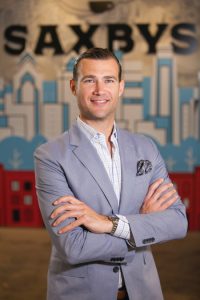 Bayer is heavily involved in Philadelphia nonprofits, serving on the corporate council of its Children’s Hospital and the boards of Big Brothers Big Sisters and the Franklin Institute, a nearly two-century-old science organization founded in honor of Ben Franklin. Working with local youth welfare groups, Saxbys has provided jobs and training for residents of the economically disadvantaged neighborhoods surrounding Philadelphia’s thriving city center. “We’re hiring a lot of people,” says Bayer, “and we’re hiring a lot of them out of the demographics that are having the hardest time getting jobs.” The coffee bar in Saxbys’s headquarters has long offered free beverages to everyone in its office building; in lieu of payment, customers can fill a tip jar that’s donated monthly to local charities, to the tune of $10,000 a year. “People walk in here and say, ‘It looks like a tech startup’—and I take that as a compliment, because startups are known for having vibrant work spaces that are built for teamwork, communication, and camaraderie,” he says. “We see ourselves as much different than a coffee company, so having a unique space was important to us.”

One of Saxbys’s major initiatives is its Experiential Learning Program, through which it has established cafés on college campuses including Drexel, Temple, and Millersville University. Not only do students help design the stores, they entirely staff and run them. Each site’s manager—or CEO, for café executive officer—earns both a salary and full academic credit while overseeing more than thirty workers and a seven-figure profit-and-loss statement. “This wasn’t a business idea,” says Bayer, who notes that a Cornell-based café is a future possibility. “This came out organically, based on me making a lot of mistakes—all the hard lessons I had to learn.” Those missteps, he cheerfully admits, include an ill-advised early foray into franchising, a lack of thought about where to locate the stores (“being young and dumb, I was willing to sell franchises anywhere”), and a start-up plan—or lack thereof—that relied on him cleaning out his savings and racking up $150,000 in credit card debt. “I went all in,” says Bayer, who quit an Atlanta-based consulting job to open his first Saxbys, concocting the name to connote luxury (à la Tiffany’s or Saks). “My parents were flipping out and scared for me. But when you do something you love, you have a way of looking forward. And if I fell on my face, I had my Cornell degree to fall back on.”

Eventually, a mentor and investor convinced Bayer that Philadelphia was an ideal base for the burgeoning Saxbys empire. The chain now has a dozen stores in the city, with several more in the D.C. area and others on or near campuses such as Georgia State, Lehigh University, and Haverford College. Each Saxbys is different, with the furniture and décor adapted to its location. A store near Penn, for example, has a clubby, Colonial look, with dark blue paneling and a white pressed-tin-style ceiling, while one at Drexel has a hip, urban air: the front of its sales counter is made of recycled corrugated metal painted in graffiti style by student artists, and the heavy wood tables were reclaimed from a nearby high school.​

In addition to the usual coffee drinks, Saxbys sells such fare as Groothies (green smoothies in different fruit combos); cold brew iced coffee with house-made flavor syrups like chai, salted caramel, and sweet mint; and a variety of sandwiches and snacks. About 80 percent of menu items are standard across the stores; the rest tap local tastes, products, and ingredients. “One thing that has been great for Starbucks is that it’s such a predictable experience, and it has monetized that quite well,” Bayer observes. “For humans, predictability is comforting; there’s a reason why McDonald’s sells so many hamburgers. But in the coffee business, we also love uniqueness and locality; that’s why independent coffee shops have been so successful. And on the product side, we’re smaller and more nimble, so we can get in front of trends faster than our big competitors.” As he adds with a grin: “We had cold brew two years before Starbucks.”