Architecture alums Katie MacDonald ’13 and Kyle Schumann ’13 have only been out of undergrad a few years, but their two-person design firm has already amassed an impressively eclectic portfolio. Partners both personally and professionally, MacDonald and Schumann dubbed their Princeton, New Jersey-based practice “After Architecture” in part to signal its broad scope—comprising work that spans not only that discipline but public art, interior design, and more. Though their projects have mainly been located on the East Coast, they’ve gone as far afield as California (with a pair of large, marine-themed sculptures on the San Diego waterfront) and even the mountains of Slovenia, where MacDonald collaborated (along with others including Erin Pellegrino, BArch ’14) on an alpine shelter that was constructed in three modules and flown to the site by helicopter. “The diversity of our work comes from the fact that it’s more connected via a process than an aesthetic,” says MacDonald, who also holds a master’s in architecture from Harvard. “I think that comes from our training at Cornell, which is so focused on site-specificity and contextuality. So we end up with a body of work where each project looks quite different.”

For Lycoming College in Williamsport, Pennsylvania—a town once home to a thriving logging industry—the team designed an “outdoor classroom” consisting of boxy, sculptural wooden benches that evoke the community’s history. Their winning entry for a competition to design a forestry group’s cabin in New Brunswick, Canada, transformed the exterior into a strikingly geometric receptacle for firewood to fuel its stove. At the request of a doctor-in-training in Cambridge, Massachusetts, they reimagined a crowded office for medical residents—in what used to be a patient room—as a sleek, convertible space for work, meetings, and socializing. “Being so close and working together so often, we’re not afraid to be honest with each other, which is a huge part of architecture and design,” says Schumann, who stayed on the Hill to teach for a year after graduation. “Being critical and constructive is really the only way to iterate and develop meaningful projects.”

The two first teamed up as undergrads, winning a $1,000 Cornell Council of the Arts grant to produce “Lightwave,” an undulating bench made of colorfully painted wooden posts that’s dramatically illuminated from within at night. Their former professor Aleksandr Mergold ’00 calls MacDonald and Schumann among the architecture program’s brightest stars—standouts, even as students in his first-year design studio, for their “precision and inventiveness.” He also notes with a laugh that when his then-toddler daughter encountered “Lightwave”—which was on display near the Foundry before moving to its permanent home in the Cornell Botanic Gardens—she was utterly entranced. “She was really excited about climbing up and down on it,” says Mergold, an assistant professor of architecture. “We couldn’t leave; we were probably there for two hours. So there was definitely appreciation of Kyle and Katie’s work by the younger generation.”

Some of Schumann and MacDonald's projects. Click a photo to enlarge. 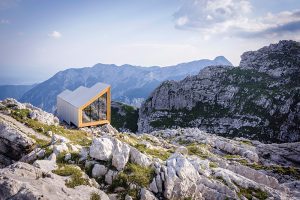 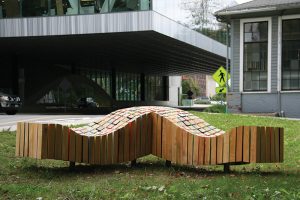 "Lightwave" a bench on the Cornell campus

A flexible office for medical residents in Cambridge 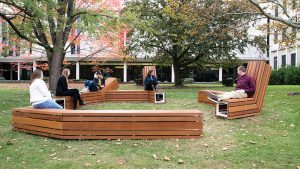 "Logjam," an "outdoor classroom" at a Pennsylvania college. 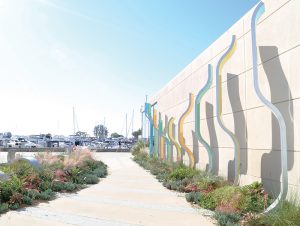