It’s early one morning late last summer, and Lexie Sonis Sachs ’09 is tackling load after load of laundry. But she’s not at home on Long Island doing chores; she’s on the job in her high-tech workspace in Midtown Manhattan. Sachs directs the Textiles, Paper, and Plastics Lab at the Good Housekeeping Institute, the 119-year-old research facility that evaluates thousands of products every year. As the institute’s top fiber scientist, Sachs is in charge of assessing everything from bedding, slippers, and luggage to rain gear, yoga mats, and sports bras. On this day, while giving CAM a tour of the lab at the organization’s headquarters in Hearst Tower, she stops at a row of washers and dryers. Sachs is working with a colleague who is laundering a line of sheets that has applied for the iconic Good Housekeeping Seal, which was introduced in 1909. The institute puts its money where its mouth is: everything stamped with the seal is backed by Good Housekeeping’s own two-year limited warranty. “We’re not just putting our name on something,” says Sachs. “We really stand behind it.” 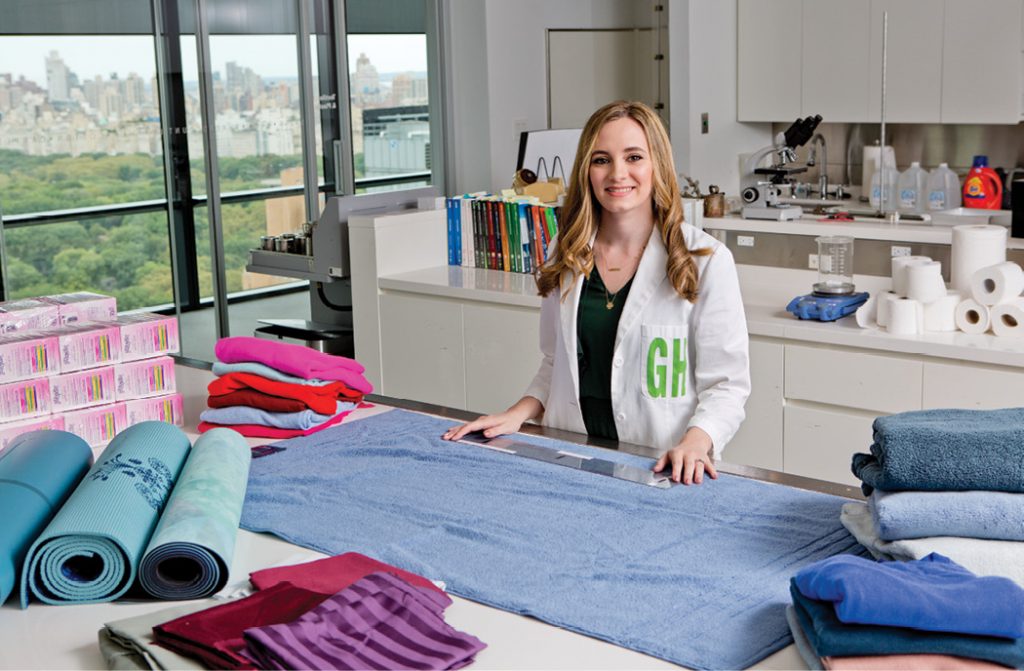 Sachs in her lab in Midtown Manhattan’s Hearst Tower.John Abbott

So, unlike some rival product-review sites and publications, a recommendation from Good Housekeeping means an item has undergone rigorous examination by a team of chemists, engineers, or other experts. (The institute has five other state-of-the-art labs: Health, Beauty, and Environmental Sciences; Nutrition; Kitchen Appliances; Home and Cleaning; and Media and Technology.) The sheets that the Textiles Lab is appraising will be washed up to five times to help assess how easily they wrinkle and how much they shrink; in a nearby room that’s humidity- and temperature-controlled, swatches of the same sheets are being run through a specially designed machine that rubs the material to measure pilling. Other equipment gauges fabric strength and how much the color fades. “It’s not just one person giving an opinion—we extensively test these products and try to be as objective as possible,” says Sachs. “People know they can trust us.”

The institute uses federal and industry standards to determine a product’s safety and effectiveness, but Sachs and her colleagues often come up with additional criteria. She recently asked employees from throughout the building to help give softness ratings for forty different towels; there’s also a Good Housekeeping tester panel of more than 50,000 people from across the country that tries products at home and provides feedback. “Something can test really well in the lab, but if people don’t like using it, that’s a big deal,” says Sachs. “We try to go above and beyond to give our readers as much information as possible.”

The job seems tailor-made for Sachs, who grew up outside Philadelphia and was attracted to Cornell because of its fiber science program. She interned at Good Housekeeping the summer before her senior year, but worked in merchandising and product development in the fashion and home industries for four years before joining the institute in 2013. Recently promoted to the Textiles Lab’s top post, Sachs says it’s her dream job. “I love being able to have an influence,” she says. “It’s very rewarding when people recognize how much work goes into what we do and how much expertise is behind it.” 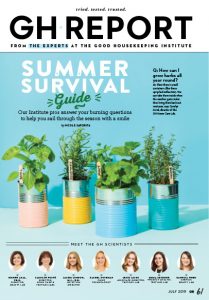 Sachs serves as an occasional expert in the national media, appearing in such venues as the Washington Post (where she has offered advice on finding the right pillows, sheets, and other items), “Good Morning America” (giving shopping tips on cashmere sweaters and hosiery), and “The Dr. Oz Show” (discussing concerns about formaldehyde in wrinkle-free clothing and how to find kids’ pajamas that are flame resistant but free of toxic chemicals). Like many of her co-workers, she sometimes home-tests items that come through the various labs, noting that she and her family have tried pillows, mattresses, toys, and more. Sometimes she finds a new favorite product—like a weighted blanket to promote restful sleep—but other times those trials don’t go so well. Last year, she and husband Andrew Sachs ’01, who have two young daughters, tested an array of diapers during a trip to Walt Disney World. “We had a few blowouts where it was pretty awful,” she recalls with a laugh. “My husband jokes that our kids are not my science experiments.”

For Sachs, one of the best parts of her job is uncovering great products at bargain prices. In 2019, for instance, her lab evaluated dozens of women’s opaque tights, checking for stretch recovery, snag resistance, and washability; consumer testers then wore them to judge things like comfort and rolling waistbands. The results: some $10 tights outperformed ones that cost $40. Says Sachs: “We always say that saving people time, money, and hassle is our goal.” The institute also has a long-standing reputation for consumer protection; Good Housekeeping magazine reported on the dangers of smoking in 1928, more than three decades before the U.S. Surgeon General issued a report linking cigarettes to health hazards. Over the years, the Textiles Lab has found crib sheets that pose suffocation risks and children’s Halloween costumes that failed to meet federal flammability standards. Sachs has debunked marketing claims, too: a favorite example is when her lab proved a line of workout gear did not increase calorie burn during exercise. As she notes: “It’s like the saying: ‘If it seems too good to be true, it probably is.’ ”