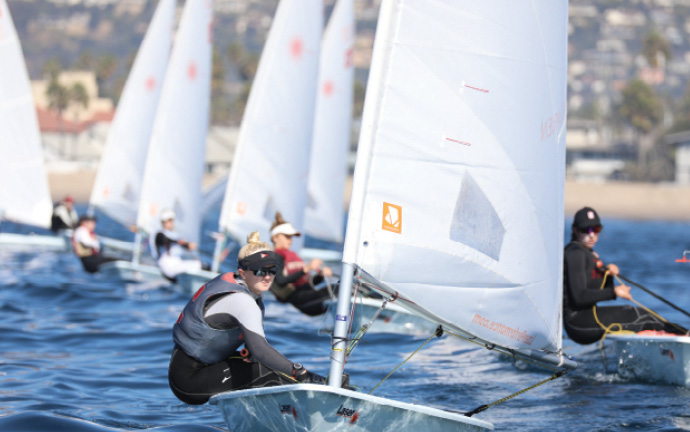 SAILING The Big Red claimed its second straight conference title, topping a 12-team field at the Middle Atlantic Intercollegiate Sailing Association (MAISA) championship in Maryland. Gabby Rizika ’20 and Adeline Sutton ’21 led all A-division sailors with 43 points after winning six of 12 races. Daisy Holthus ’21 skippered the B-division boat that also led the pack with 49 points and four wins. Earlier in the season, Lillian Myers ’23 (above) became the first Cornell sailor to claim the Faye Bennett MAISA Women’s Singlehanded Championship, winning seven of the 14 races, including five of the last six. The win sent Myers to the national championships, where she finished fifth of 18 sailors and best among freshmen.

FIELD HOCKEY Cornell cracked the national rankings for the first time since 2014 and finished the season with a 10-7 record, tied for third in the Ivy League. After opening 2019 with five wins in seven games, The Big Red placed 24th in the National Coaches Poll for the week of October 8 before beating Yale and losing to the University of California, Berkeley, the following weekend to fall out of the rankings. Maddy Conklin ’20 was one of 38 players selected to the 2019 Division I Senior Game.

WOMEN’S SQUASH Sivasangari Subramaniam ’22 enjoyed success beyond the college level last fall, posting impressive outings in national and international competitions. Ranked 48th in the world by the Professional Squash Association going into the women’s world championship in Egypt, Subramaniam reached the round of 16, thanks to a 3-2 win over America’s top-ranked player in the opening round. A 3-1 win over a Dutch player in the second round sent Subramaniam to a showcase court facing the Great Pyramid of Giza, where she lost 3-1. Earlier in October, she reached the round of 16 at the U.S. Open Squash Championship with a pair of wins against players ranked among the top 40 in the world.

WRESTLING Three Cornell wrestlers appeared at the U23 World Championship in Hungary in October. Andrew Berreyesa ’22 competed in the 82-kilogram Greco-Roman class, losing his first-round match. Max Dean ’21 and Chas Tucker ’20 both made their international debuts as they competed in the freestyle event. Dean lost his first match at 86 kg and Tucker lost his at 61 kg. Berreyesa and Dean are expected to miss the 2019–20 collegiate season due to their Olympic training schedule while Tucker will wrestle for the Big Red.

FOOTBALL Jelani Taylor ’20 was one of 12 finalists for the 2019 William V. Campbell Trophy, which is presented by the National Football Foundation and the College Hall of Fame to recognize academic success, athletic performance, and exemplary leadership. As a finalist, Taylor—who has been a three-year starter at safety and led the Big Red in tackles through most of the 2019 season—will receive an $18,000 postgraduate scholarship. A Hotelie with a 3.94 GPA, Taylor also won Cornell’s Richie Moran Award, given to a senior student-athlete who has distinguished himself or herself through academics, athletics, and ambassadorship.

MEN’S SWIMMING Michael Fey, PhD ’80, returned to competition after a 46-year hiatus and quickly claimed a place among the top American swimmers in his age group. A collegiate swimmer at St. John’s University, Fey joined U.S. Masters Swimming in 2018 as part of an effort to improve his health. Success at the state level earned him a shot at the 2019 National Senior Games in Albuquerque, where—despite being one of the oldest swimmers in his 65-to-69 age group—he took home three medals, placing second in the 50-yard butterfly and third in the 50-yard backstroke and 100-yard individual medley. 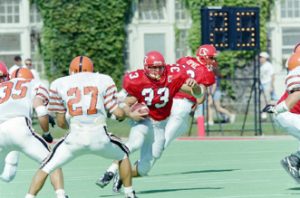 FOOTBALL As a three-time All-Ivy running back at Cornell, Chad Levitt ’97 (right) ran for 4,657 yards; last summer, he biked 3,366 miles from coast to coast. His goal: to raise awareness and research funding for chronic traumatic encephalopathy (CTE), a neurodegenerative disease caused by repeated head injuries that has become an increasing concern for athletes in contact sports like football and ice hockey. Levitt, who also played for the NFL’s Oakland Raiders, left from Margate, New Jersey, in late August and completed his ride 58 days later in Santa Monica, California, raising more than $21,000 for the Concussion Legacy Foundation.

MEN’S HOCKEY Cole Bardreau ’15 made his NHL debut on October 21, playing almost nine minutes to help the New York Islanders beat the Columbus Blue Jackets 3-2. He had little time for pregame nerves, however—arriving at the rink just 90 minutes before the start after receiving the call to head to Columbus following a morning skate with his AHL team in Bridgeport, Connecticut. Bardreau scored his first NHL goal less than two weeks later on a penalty shot against the Ottawa Senators.