So it was with a rare mix of virtue and gluttony that I trooped into the newly renovated Stocking Hall on a frigid Saturday afternoon in January, along with some thirty other volunteers. Most of us were members of the weekly bread share at Wide Awake Bakery, the artisanal enterprise run by Stefan Senders, PhD ’99. “We are looking for some help,” Senders had written in a mass e-mail to the share, affectionately known as the Crust Fund. “What kind of help? We need BREAD TASTERS! What? Yes! BREAD TASTERS!” 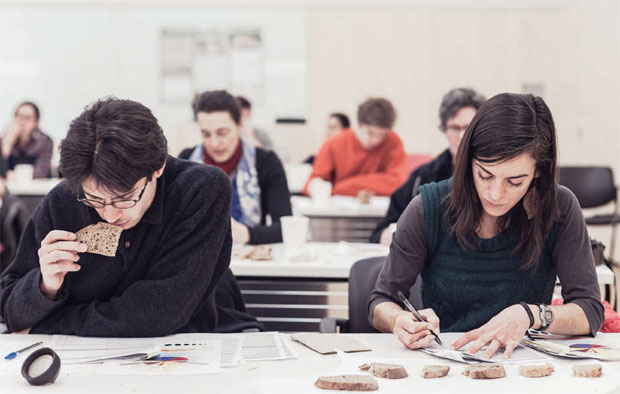 The man knows his audience. The spots filled up in days, with dozens willing to trade the better part of a weekend for $25 in Crust Fund credit. On the way into Stocking, I overheard a woman say she’d kept a sourdough starter alive for thirty years.

The tasting was part of a research project by plant breeding and genetics professor Mark Sorrells and his grad student Lisa Kissing Kucek. Funded by a branch of the USDA, the multi-institution effort is studying how heritage grains can be grown by small organic farms as rotational crops to improve soil health, reduce disease, and control weeds. But for farmers to include them, Kucek explained later, they must be cost-effective—so the researchers are aiming to see which strains make the tastiest breads and cooked grains for the organic market.

Our mission began with a hurdle: the researchers tested the power of our palates. We had to sample cups of flavored water—sets of three each for salty, sweet, and sour—and rate them according to intensity. (According to Kucek, about 15 to 20 percent of people don’t make the cut.) That Rubicon passed, we got the hang of the descriptive lingo by sampling a variety of foods—nuts, malt, yeast, milk, butter, caramel candies, and more—and discussing them as a group. Then we tasted a couple of cooked grains (not types in the study) to establish a hive mind—to agree, for example, what constitutes a five out of ten in terms of moistness.

This took an entire afternoon. Then we were set free, having never gotten our teeth around the enticing spread of artisanal loaves at the front of the room.

But as the saying goes: be careful what you wish for. The next day would bring an experience that I can only describe—at the risk of political incorrectness—as being water-boarded with bread. By the end of it, I was not only suffering from a distinct ache in the midsection, but I was starting to go down a phantasmagorical rabbit hole. (“What… is… bread… anyway?”)

We started off by “calibrating” with two breads that weren’t part of the study. Then we did an official tasting of seven varieties. Then we tasted cooked versions of those seven grains. Then—God help us—we tasted the seven breads again.

This was not a casual nibbling. You started by sniffing a slice, both the whole thing and then the crust and crumb individually. You described the aroma according to a tasting wheel the researchers are developing—an instrument, akin to those for wine and coffee, that ranges from “dark beer” to “unripe banana” to “musty” and “hay-like”—and rated its intensity on a scale from 1 to 10. There was a color chart to characterize both crust and crumb, and a series of circles to estimate the size of air bubbles. You described the shape of the bubbles and the roughness of the crust. You pinched the slice to assess density; was it very firm, or did it smash like angel food cake?

Then came the tasting, where you rated flavor intensity and described it according to the wheel. You used a stopwatch to record how long the crumb took to dissolve in your mouth, and how long to chew a piece. From a list of various tastes—wheat, sweet, salt, sour—you had to decide which was most and least present.

We had ten minutes for each sample—which sounds like a lot, but the time flew by and there was a certain amount of performance anxiety. It was hard not to be exhausted by the whole process, which was oddly overwhelming. All the breads were heavy and dense—the flour was 100 percent whole wheat, bran and all, not the type normally used in baking—and of course there was no lubrication in the form of butter or olive oil. At a certain point it struck me that once you’re an adult, you’re almost never obliged to eat something if you don’t feel like it. Here, the bread just kept coming, and we were ethically bound to chow down.

All griping aside, though, I’m glad I participated. It was a fascinating experience, and I’ll never look at bread the same way again. Also, it was a hoot to be in the same room with two dozen bread obsessives from various walks of life—some sporting long gray ponytails and work boots, others with tattoos and piercings. It was, as Senders noted at one point, a rarefied crowd; Ithacans tend to be more eager than most Americans to have exhaustive conversations about how slashing the dough before baking affects crust texture. “You eat a lot of bread, and you’re sensitive to these things,” Senders told the group. “It would probably be a lot simpler if we were doing this in, say, Milwaukee.”