In early February, Bill Nye ’77 ignored the conventional wisdom among many science educators by debating creationist Ken Ham. The event, held on Ham’s home turf in Kentucky, drew reporters from around the world, a capacity crowd of 900, and as many as 532,000 concurrent live viewers on YouTube. CNN’s Tom Foreman moderated and posed written questions from the audience after four alternating stints totaling forty-five minutes from each debater.

Ham, the founder and CEO of the Creation Museum, asserts that the divine creation model and six-day timeline presented in the Bible’s Book of Genesis are literally true—reckoning Earth’s age at 6,000 years. Further, he believes that a global flood approximately 4,500 years ago killed all terrestrial life except for the occupants of Noah’s Ark. Ham states that his trust in the Bible as the word of God is all he needs to accept and promote these ideas. As he said in his opening remarks: “I believe science has been hijacked by secularists.” 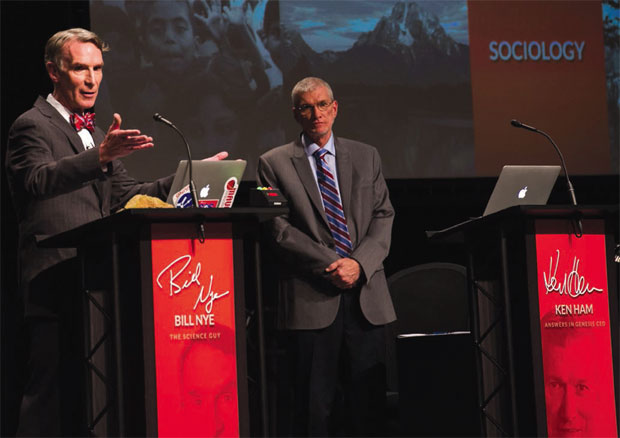 Nye, in bypassing faith issues and using readily understood examples, kept the debate on a civil—even cordial—plane. As he pointed out, many believers in the Bible also accept evolution over billions of years to be established science. He challenged Ham with a number of points inconsistent with a 6,000-year-old Earth, including a live tree in Sweden with a documented age of 9,550. He cited ice cores from Greenland revealing 680,000 annual cycles, and long-term sedimentary deposits containing earlier life forms in lower levels and more advanced ones above. “We are standing on millions of layers of ancient life,” he said, noting the fossil deposits found in Kentucky. “How could those animals have lived their entire life, and formed these layers, in just 4,000 years? There isn’t enough time since Mr. Ham’s flood for this limestone, that we’re standing on, to have come into existence.”

In an extensive discussion of the flood, Nye asked why both live and fossil kangaroos are found only in Australia if their ancestors were passengers on Noah’s Ark, which is presumed to have come to rest somewhere in the Middle East. He noted that the 7,000 “kinds” of life claimed to have been carried on the Ark would have had to increase by eleven per day, every day, to reach Earth’s current 16-million-species level—and called into question the practicalities of ark-building. “It’s very reasonable, perhaps, to you that Noah had superpowers and was able to build this extraordinary craft with seven family members,” Nye said. “But to me, this is just not reasonable.”

Perhaps the most tangible test of the debate’s outcome will be in Ham’s ability to complete the sale of a $55 million bond issue backing a planned Kentucky attraction called Ark Encounter. (The issue has been stalled around the 50 percent level for months, and some observers have suggested that the event was motivated by the fact that the offering is nearing the end of its window.) As the project’s website describes it, its centerpiece will be a reproduction of the biblical vessel—”a full-scale, all-wood ark based on the dimensions provided in the Bible (Genesis 6), using the long cubit, and in accordance with sound established nautical engineering practices of the era.”

Evolutionists have typically avoided public debates with creationists, for fear of giving them the validation that such events might imply; Ham himself noted that his only other one took place in 1990. But in the days following the debate, Nye’s decision to participate appeared to have been vindicated, as the doctrine underlying the Creation Museum received greater scrutiny and Ham’s performance was criticized even by fellow believers. Nye, on the other hand, garnered praise from some of the academics—including Jerry Coyne, a professor of ecology and evolution at the University of Chicago—who had questioned his participation. “The debate was Ham’s to win, and he lost,” Coyne told the Christian Science Monitor. “And the debate was Nye’s to lose, and he won.” Or, as a headline in the Huffington Post declared: “Bill Nye Invites Us to Explore the World, Ken Ham Does Not.”