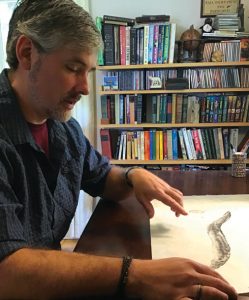 The scholar with one of his many eel images.Vanessa Greenlee

Have you ever wondered how much it would cost to pay a year of Cornell endowed tuition entirely in eels? No? Well, one recent doctoral alum has. And he can tell you, too: a whopping 213,024.

John Wyatt Greenlee, PhD ’20, knows his eels. The medieval studies grad calls himself the “Surprised Eel Historian” on Twitter, where he shares eel-related factoids both vintage and modern on a near-daily basis—including the observation that since eels cost the equivalent of 33 to 66 cents each in medieval England, “hotdogs are a good modern analog” for their price point.

Thanks in part to coverage in the popular press—including a Time article last fall—Greenlee’s Twitter following has grown to more than 8,300. That may be a pittance for your average celebrity influencer, but by medievalist standards it’s none too shabby. “In 1392 a group of Scottish pirates seized a shipment of herring & eels that merchants in York had ordered from Holland,” he tweeted in mid-November. “The merchants complained to the king, but it was no use. The eels were gone.” Or, in late October: “When it’s time to leave for the 3,000+ mile trip back to sea to mate & die, eels stop eating. To get the energy they need they self-cannibalize their fat, their digestive systems, & their bones. Would you eat your own bones just to get home for sex?”

The “surprise” in Greenlee’s Twitter moniker comes from the fact that he hardly expected to become so fascinated by eels—or, indeed, to do his doctoral dissertation on the social, political, and economic importance of the slippery fish in medieval and early modern England. A cartographer and historian by training (in addition to a BA in history and classical studies from Hamilton College, he earned two master’s degrees elsewhere before matriculating on the Hill), he was examining maps of seventeenth-century London when he noticed that several included depictions of vessels on the Thames River labeled “eel ships.” “I knew nothing about eels, so it seemed odd to me that they’d be important enough to be on these maps, because everything else on them is a big fixed structure like the Tower of London or the Globe Theatre,” recalls Greenlee, who’s now on the academic job market after completing his degree last spring. “That made me wonder why the eels mattered so much and why these ships were so important that they’d sort of become a civic landmark.”

The answer, as he explored in his dissertation, was that in medieval times eels were not only a popular foodstuff but—along with commodities like honey and grain—a de facto currency in which rents and taxes were paid, in an era when coins were scarce. “Eels were one of the most common in-kind rents in England,” Greenlee says, explaining that the fish were generally preserved by salting or smoking, then transported in “sticks” of twenty-five eels each. “There were villages that had to pay their monastic landlords forty, fifty, sixty thousand eels a year in rent. So there were a lot of eels moving around England.” And as Greenlee points out, with rents generally due just before Lent, they were particularly welcome on the dining tables of monks—who, as it happened, held some wildly inaccurate beliefs about how baby eels were made. “During Lent you’re not supposed to eat meat,” he notes. “Fish is OK and eels are even better, because the medieval concept of eel biology was that they reproduced asexually, that they had some sort of spontaneous generation—a belief that goes back to Aristotle. And one of the reasons you don’t eat meat during Lent is that it reminds you of carnal sin. So a fish that has nothing at all to do with sex is as good as you can get.”

One of Greenlee’s advisers, history professor Raymond Craib, praises his thesis as an impressive feat of “scholarly sleuthing”—one that covers 600 years and taps a vast array of sources. “John is a relentless pursuer of evidence and a careful reader, and he’s also very open-minded, thoughtful, inquisitive, and curious,” Craib says, noting that Greenlee’s work drew in such observations as the fact that eels appear in Shakespeare’s oeuvre more often than any other fish. “He’s a wonderful example of someone who is scholarly but also accessible.” Craib fully expects Greenlee’s dissertation to be published in book form; Greenlee is also planning to produce a medieval eel cookbook with historical vignettes sprinkled between the recipes. He’d been contemplating the latter project for a while when he polled his Twitter followers about their interest; 94.7 percent voted “Yes! More eels, please!” (and only a tiny minority voted, “No! Eels are for Twitter”).

Greenlee’s cheeky tone and quirky stream of eel facts come in service of a serious topic. While eels were once so abundant that they were a handy stand-in for cash, today they’re critically endangered due to such threats as pollution, climate change, and habitat loss. “Historically there were a lot of eels in waters in both Europe and America; until the middle of the last century, as much as 50 percent of the downstream fish biomass in rivers in Europe and the East Coast of the U.S. were eels,” Greenlee says. “But since the Seventies or so, there has been about a 90 percent decline in their numbers.”

Unfortunately for eels, though, they lack the charisma of other endangered creatures—from the polar bears threatened by climate change to the elephants targeted by poachers. “Scientists sometimes have a really hard time convincing people that eels are worth saving, because they’re not cuddly and majestic; they’re kind of slimy and weird,” Greenlee observes. “One of the things I’ve done with my research is tell interesting stories about eels in public forums, and that has put me in a position of being able to talk to people about issues of conservation and fish biology. Medievalists don’t always get to have their work interface with things that are of modern concern, but this lets me do that, and it’s been really enjoyable.”