If aerial drones have nightmares, there’s fodder for them in the offices of Cape Productions—where a corner of the open workspace is given over to dozens of the compact, vaguely arachnoid machines in various states of disassembly and dismemberment. Visitors to this nondescript building in Redwood City, California, are likely to be greeted by the company’s designated “chief security officer”: Mr. Brody, a German shepherd with giant paws and a low-key disposition.

Among his colleagues are Alex Loo ’06, Cape’s senior systems engineer, who’s helping the Bay Area start-up realize its mission of making everyday vacationers look like stuntmen in a James Bond movie. The firm, which has raised more than $10 million in venture capital, uses drone-mounted cameras to make high-definition aerial videos of skiers and snowboarders in action—offering a cinematic perspective far beyond the reach of helmet-mounted GoPros. So far, nine resorts—including those in Winter Park, Colorado; Squaw Valley, California; and Mountain Creek, New Jersey—have signed on. “The primary customers are people who’d normally get pictures taken by the on-mountain photographers,” Loo explains. “A lot of ski resorts are actively banning personal drones, so we’re partnering with them to offer the service.” 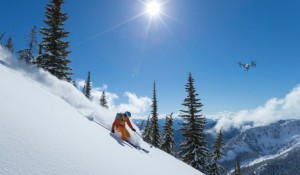 A former mechanical engineering major, Loo does both hands-on tinkering with the drones—Cape buys existing models and adapts them—and computer coding. He also flies them, having earned the sports pilot license that the FAA currently requires for commercial drone use—even when the aircraft fly autonomously, as Cape’s do. The drones, which generally hover about thirty feet above the slopes and have crash-avoidance software that keeps them away from obstacles like trees and chair lifts, are guided by a GPS wristband that the subjects wear as they navigate the slopes. The service costs $100 to $200 to record three runs; about two days later, clients receive a professionally edited highlight video of around two minutes. “It’s being able to push the boundaries of applications for this technology and make it accessible to people to get the end result—the video—but in a responsible and safety-conscious way,” Loo says, noting his frustration at high-profile amateur drone mishaps, like the January 2015 crash on the White House lawn, that have given the aircraft a black eye. “Ski resorts are traditionally very risk averse. They don’t want to introduce anything that could open them up to safety issues.”

Engineer Alex Loo ’06 (seen in the cockpit) got a pilot’s license so he could qualify to fly the drones commercially.

Loo and his Cape colleagues have trav­eled to New Zealand to work with the U.S. ski team; recording elite athletes for training purposes is another potential market, as are other action sports like mountain biking, surf­ing, and waterskiing. Himself a snowboarder, Loo has served as a test subject. He calls seeing himself on aerial video “really cool”—though he admits that he’s been photo­graphed in some less-than-Olym­pian circumstances. “I took a little tum­ble,” he says with a laugh. “It happens.”