At a Greek mixer, a student sees one of his fraternity brothers dancing with a sorority member—and both of them have clearly had way too much to drink. A few minutes later, he sees the man take the woman by the hand and start to lead her up the stairs of their fraternity house. 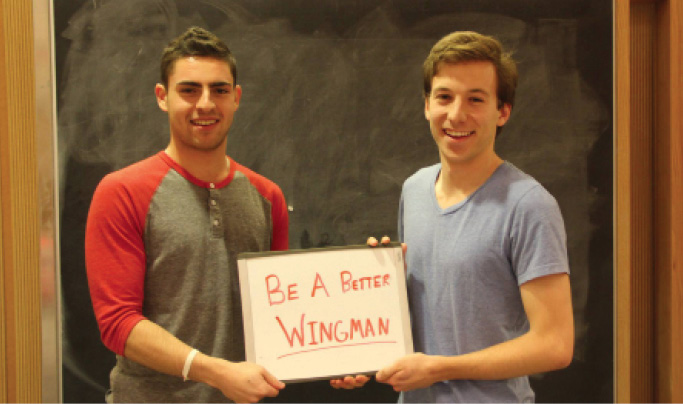 Equipping men to deal with such situations is the mission of Wingman 101. Overseen by Gannett Health Services and led by students, the group works to help prevent sexual assault by conducting all-male training sessions for fraternities, sports teams, residence halls, and more. Since its founding in 2008, several thousand young men have taken its hour-long program. “All the Wingman facilitators are guys who can relate to the other guys they’re talking to,” says Matthew Laks ’15, who served as the group’s president his senior year. “We’re students; we’re in frats; we play sports.” One reason Wingman’s approach works, Laks says, is that the group—whose tagline is “Bros talking to bros on issues of sexual violence”—challenges the stereotype of public-health educators as buzz-killing moralists. “We always say, ‘We’re not anti-alcohol. We’re not anti-sex. We’re not going to lecture you,’ ” says Brian Harwitt ’15, Wingman’s past vice president. “We present scenarios, help facilitate discussions, and give a tool kit on how to intervene.”

Central to Wingman’s ethos is the belief that women alone shouldn’t have to shoulder the burden of raising awareness about sexual assault.

Talking about such issues in an all-male environment is essential, participants say. In a mixed-gender group, they note, men are more apt to express views they think are politically correct, rather than saying how they really feel. “When it’s just the bros, you’re going to get a lot more honesty,” says Wingman alum Garrison Lovely ’16, a former president of Delta Tau Delta who facilitated Wingman’s presentation to his fraternity. “If people are just answering because they feel like it’s the right thing to say, but they don’t agree with the underlying philosophy, I doubt they’re going to step up in a real situation.” Lovely calls Wingman “a very powerful, realistic way” of helping brothers navigate the social landscape of Greek life. “It uses a peer-to-peer format and down-to-earth situations,” says Lovely, an ILR student from Newtown, Pennsylvania. “I think it connected with our brothers a lot more than a presentation [conducted by staffers] from Gannett, which might seem more out of touch with what’s actually happening on the ground.”

Wingman 101 promotes what’s known as “bystander intervention,” a growing movement that seeks to empower—and, to a certain extent, obligate—people to act when they witness a dangerous or even iffy situation. Laks cites the iconic example of Kitty Genovese, a young woman who was stabbed to death on a New York street in 1964. The attack was allegedly overheard by some three dozen neighbors, he notes, “but nobody called the police, because everybody thought that somebody else was going to take action.”

The scenarios that Wingman covers aren’t nearly as cut and dried. They often involve social events, sexually charged situations, and alcohol—which can make it that much harder for bystanders to know what to do. That’s why it’s so important that people feel empowered to intervene before a situation escalates, Laks says. “We don’t want things to get to a point where consent is in question,” he stresses. “We want to address the issue before the consent question even becomes apparent. If something doesn’t seem right, we don’t want it to get to the point where two people are in the bed together and a guy takes advantage of a girl.”

Wingman was founded by Nina Cummings, MS ’92, Gannett’s sexual violence prevention coordinator, who recruited male undergrads to serve as its leaders; it was registered as a student organization in 2014–15, though it’s still an official Gannett program. She established Wingman, she says, in response to an evolution in understanding about how to prevent sexual assault. “There were many decades spent telling women how to protect themselves, but when the field examined the progress—which was minimal—it shifted to engaging men and helping them understand the importance of things like consent,” Cummings explains. “We learned that men were getting defensive with education and prevention models that talked to them all as potential perpetrators. But most men are actually good eggs, and good allies. Most are simply the silent majority who don’t know what to do when they become aware of attitudes or behaviors that could lead to sexual violence. So Wingman was based on the idea that we could create a safe place for men to talk about these issues—to take a community approach and say, ‘This is also your issue. This is hurting women that you care about, and you play a role and could actually help prevent it.’”

We want people to look out for these risky situations and say, “Maybe I’ll intervene.”

And indeed, central to Wingman’s ethos is the belief that women alone shouldn’t have to shoulder the burden of raising aware­ness about sexual assault. As Wingman alum Ibrahim Diallo ’16 puts it: “For such a cause, it’s really not fair to have just one side advocate for it.” Wingman, says the economics major, “does a good job of bringing guys into the picture and making them feel more comfortable talking about feasible ways to prevent sexual violence.”

Cummings notes that academic anal­yses have found that male-to-male peer education does get the message across. As the authors of one Ohio University study put it, the program they evaluated “had an impact on self-reported sexual aggression and an effect on men’s perceptions that their peers would intervene when they encountered inappropriate behavior in others.” While no formal study has been done on Wingman’s efficacy, Cummings reports that post-session feedback often includes such comments as “Now I will know what to do” or “Now I know what to look for.” “The response has been unanimously positive, for two main reasons,” she says. “One is because it’s peer to peer; secondly, these guys don’t lecture. They don’t go in and tell them how to be morally superior human beings. They say, ‘We under­stand the reality; what is it going to take for you guys to recognize risk and act?’ ”

As part of the Wingman training, participants are given green, yellow, and red cards, then asked to indicate whether a given scenario is OK, an obvious no-go, or unclear. It’s those yellow-card cases—like the intoxicated fraternity brother and his companion—that can be the hardest to address. “You might not know the entire history; they could be a couple, or maybe it’s innocuous,” says Lovely, who also trained with Cayuga’s Watchers, the other major bystander-intervention group on campus, whose members serve as sober monitors at parties. “You can do an intermediate step, approach them and talk to them—make it clear that if either one is uncomfortable with the situation, they can step out. The idea is to get people to think critically about plausible scenarios in which somebody might be too far gone to consent, situations where they might not be able to make the best decisions for themselves.”

Another key part of Wingman’s ap­proach is an understanding that in­ter­­ven­­ing to prevent sexual assault not only keeps a woman from being victimized, but also prevents a man from becoming a perpe­tra­tor. A single poor choice, Laks and Harwitt note, can have long-lasting consequences—but a decision to intervene can have enormous benefits. “Most of our scenarios revolve around situations with alcohol, and a lot of the time people have blinders on; they’re focused on what they’re doing and not on anyone else,” Harwitt says. “We want people to look out for these risky sit­uations and say, ‘Maybe I’ll intervene,’ where in the past they’d just continue hang­ing out.” And Wingman offers practical—sometimes creative—ideas for approaching such potentially un­com­fort­able situations. For example, if a student wants to interrupt what he fears could be a nonconsensual encounter but wants to avoid an outright confrontation, he could knock on the bedroom door and pre­tend he’s tipsily looking for his cell phone. To avoid a potential damaging situation, Harwitt says, “it’s worth it to have that five or ten seconds of awkwardness.”

At the beginning of each training session, participants are asked to define the term “wingman.” The answer, Laks notes, is always more or less the same: “It’s a guy who helps you get with a girl.” But the facilitators hope that by the end, the men have a different sense of the word. “It’s redefining what a good wingman is,” says Harwitt. “It’s someone who helps everyone in the community feel comfortable, who makes sure everyone’s making smart deci­sions. A common misperception about our program is that people say, ‘You’re just trying to protect men,’ but we’re trying to make it safer for everyone on campus. We talk to men because this isn’t a discussion that’s often had, man to man.”