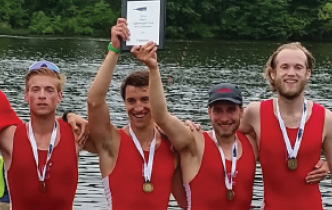 MEN’S HOCKEY Two more former Big Red players will pursue professional careers this fall. Reece Willcox ’16 signed an entry-level contract with the Philadelphia Flyers shortly after the end of Cornell’s season in March. He played six games for the Lehigh Valley Phantoms in the American Hockey League, which also included former Cornell teammate Cole Bardreau ’15. Christian Hilbrich ’16 signed a deal to play for the Wilkes-Barre/Scranton Penguins, an affiliate of the Pittsburgh Penguins. 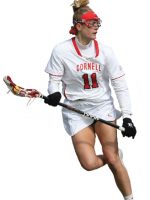 WOMEN’S LACROSSE After leading Cornell to one of its best seasons in school history, head coach Jenny Graap ’86 was chosen to coach the North team in the annual Intercollegiate Women’s Lacrosse Coaches Association (IWLCA) Senior All-Star Game. Graap collected her 200th career win in 2016, a season that also saw the Big Red post 14 wins, its second most ever, and make its first NCAA tournament appearance since 2006. Catie Smith ’17 (right) was named a third-team All-American by the IWLCA after backstopping a defense that held opponents to single digits in 15 of its 19 games and six or fewer goals eight times.

MEN’S GOLF
Luke Graboyes ’17 was named to the Golf Coaches Association of America All-Northeast Region team. Graboyes won the Ivy title—breaking a 30-year drought for Cornell—and became the first Big Red golfer to qualify for the NCAA tournament since it adopted a regional format in 1989. 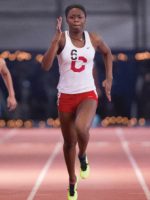 WOMEN’S TRACK AND FIELD Cornell became the first Ivy League team to win the Women’s ECAC Outdoor Championships, edging James Madison by 3.5 points in May. Adrian Jones ’17 (left) provided the decisive points with a fourth-place finish in the 200 meters, putting Cornell ahead to stay with only a couple of events left. Eve Glasergreen ’19 was the Big Red’s only individual champion, winning the 5,000 meters in 16:51.01. A month later, Caroline Kellner ’16 earned honorable mention All-America for placing 24th in the 10,000 meters at the NCAA Championships.

MEN’S TRACK AND FIELD The 2016 season was full of team and individual successes. After a dominating win at the Heps, Cornell placed second at the IC4A Championship behind first-place finishes from Alex Rodriguez ’18 in the long jump and Rob Robbins ’16 in the javelin. Then, six Big Red athletes earned All-American laurels at the NCAA meet. Rudy Winkler ’17 earned first-team honors after placing second in the hammer throw, as did Robbins, who was eighth in the javelin. Honorable mention All-Americans were Max Hairston ’16 (19th in the 100 meter hurdles), James Gowans ’17 (20th in the 1,500 meters), and Bobby Plummer ’17 (21st in the triple jump).

BASEBALL Former Cornell pitcher Brian McAfee ’15 was selected by the Tampa Bay Rays in the 38th round of the 2016 first year player draft in June. He was signed to the Princeton (West Virginia) Rays in the rookie level Appalachian League.

MEN’S BASKETBALL After playing for the University of Connecticut as a grad student, Shonn Miller ’15 spent part of his summer with the Utah Jazz in a pair of NBA summer leagues, averaging 3.5 points in five games. His best outing came in an 86-71 Las Vegas League win over the Portland Trail Blazers when he scored eight points in 16 minutes of playing time. Miller averaged 12.3 points per game at UConn, helping the Huskies to the American Athletic Conference title.

MEN’S HOCKEY After scoring two goals in less than two minutes to get the Wheeling Nailers into the ECHL playoffs, John McCarron ’15 made the most of his post-season opportunity. He was fourth overall in playoff scoring, and tops among rookies, with 23 points on 11 goals and 12 assists as the Nailers reached the final of the Kelly Cup playoffs.

MEN’S TRACK AND FIELD In the run-up to the Summer Olympics, Bruno Hortelano-Roig ’13, BS ’14, established himself as one of the world’s best sprinters, winning a European title in the 200 meters. His time of 20.39 in the semifinals of the European meet set a national record for Spain. He also finished fourth in the 100 meters.

FENCING Daria Schneider, a fencer ranked as high as second in the nation and 13th in the world, was named Cornell’s new coach in June. A five-time member of the U.S. national team, she has won more than 50 medals, including one national title and two third-place finishes in the World Championships. She previously served as assistant coach and interim head coach at Columbia.