MEN’S LACROSSE After a two-year absence, Cornell returned to the NCAA tournament, reaching the quarterfinals before losing to Maryland 13-8. The Big Red earned their bid by winning the Ivy League tournament for the first time since 2010. They finished the season 13-5 and were ranked in the top 10 for the first time since 2015. Nine players earned All-Ivy honors—the most in 11 years—led by first-team selections Jordan Dowiak ’18 (below), Jake Pulver ’18, and Jeff Teat ’20. 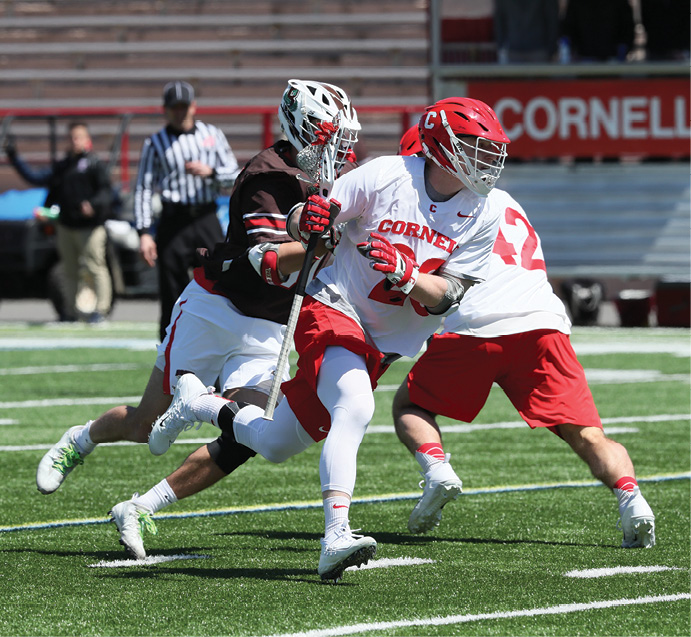 WOMEN’S GYMNASTICS At the USAG Gymnastics Women’s Collegiate National Championships in Texas, Kaitlin Green ’19 posted Cornell’s top result during the individual portion of the event with a third-place finish on balance beam, earning first-team All-American honors. Amy Shen ’21 (third in all-around, eighth in vault) and Izzy Herczeg ’21 (10th in floor exercise) also earned first-team laurels. In the team event, Cornell set a school record with 195 points to finish second in its semifinal before finishing fourth in the final.

MEN’S GOLF Mike Graboyes ’18 finished his Cornell career as the only golfer to earn All-Ivy honors four times when he placed third at the Ivy championships. The Big Red came in fourth at the event—24 strokes behind first-place Yale but only two shots out of second and one out of third. Head coach Matt Baughan was named the league’s Coach of the Year. 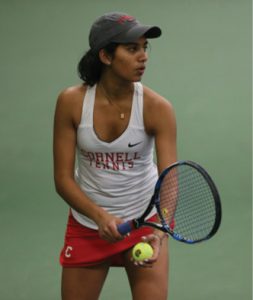 WOMEN’S TENNIS Priyanka Shah ’18 (right) is the first Cornell women’s player to earn first-team All-Ivy honors in both singles and doubles in the same season, finishing her career 47-27 in singles and 48-26 in doubles. Ananya Dua ’20, Shah’s partner as a first-team doubles pick, also earned second-team laurels in singles, becoming the first underclassman in program history to get two postseason honors in the same year.

POLO Both the women’s and men’s teams saw their seasons end at the USPA Intercollegiate semifinals. The women lost to Virginia 13-8 to finish 16-4, while the men fell to Southern Methodist 14-9 to close with a 15-4 record. Both advanced to nationals by winning Northeast Region titles.

WRESTLING Kyle Dake ’13—the first NCAA wrestler to win national titles in four different weight classes—continues to make history. In April, he helped the U.S. win its first World Cup title in 15 years. He went 4-0 at 79 kilograms (about 174 pounds), besting his first three opponents with a combined score of 31-0 before beating a two-time Olympian from Azerbaijan 6-4 in the title match. A month later, Dake won the U.S. freestyle championship at 79 kg, taking the title match by criteria after the score was tied 5-5 at the end of the third period. Nashon Garrett ’16 was second at 61 kg in the national event, losing the title match 20-13.

WOMEN’S LACROSSE Jenny Graap ’86 collected her 200th win as head coach when the Big Red beat Binghamton 15-7 in April. When combined with the wins she earned in four seasons at George Mason before taking the Cornell post in 1998, Graap has 221 career wins—ranking 13th among active coaches and 15th of all-time. In other news, former Big Red player Kathy Milmoe Taylor ’84 coached LeMoyne College to the NCAA Division II championship, the school’s first national title in a women’s sport. The Dolphins finished 22-0, matching the Division II record for wins in a season. Taylor led Cortland State to six conference titles in six seasons before taking over at LeMoyne in 2014.

MEN’S HOCKEY A pair of former Cornell players earned post-season laurels in professional leagues this season. The Binghamton Devils’ Jacob MacDonald ’15 was named an AHL first-team all-star after leading the league’s defensemen in scoring with 55 points on 20 goals and 35 assists; he was also his team’s MVP. Mitch Gillam ’17 was named to the ECHL All-Rookie Team. Playing for the Worcester Railers, a New York Islanders affiliate, Gillam was the league’s top-ranked rookie goalie, posting a 2.15 goals-against average with a 23-14 record and an ECHL-best five shutouts.