In early January 2017, a USA Today poll bestowed the honor of the nation’s best new restaurant on an unlikely recipient: a tiny establishment nestled on a block-long, one-way street just off the main drag in Geneva, New York, a college town located an hour from Ithaca on the western shore of Seneca Lake. Called FLX Table, it beat out competition from major cities including San Diego, Philadelphia, and Nashville. It has rarely had an empty seat since. 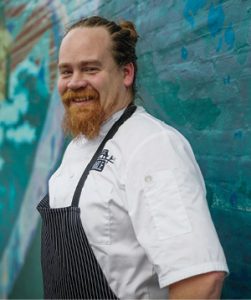 Chef and restaurateur Christopher Bates ’03, who worked his way through Cornell cooking at the Statler. Daniel Bell

FLX Table is literally that—one table, seating fourteen people. Founded by Hotelie Christopher Bates ’03 and his German-born wife, Isabel Bogadtke, the restaurant serves a five-course, prix fixe meal ($59 per person) at two sittings, five nights a week. Guests, seated in charmingly mismatched chairs, dine just steps from the open kitchen, at the rustic rectangular table Bates built, beneath artful hanging boxes of verdant herbs. “The dining experience is really the way we cook at home for friends, but elevated a bit in the way things are plated and presented,” says Bates, a chef and master sommelier who grew up south of Rochester. “The idea of the restaurant was to bring that same feeling and energy. You’re in the kitchen; you’re part of it. And like a dinner party, maybe you don’t know everybody—but by the end of the night you’re exchanging phone numbers.” 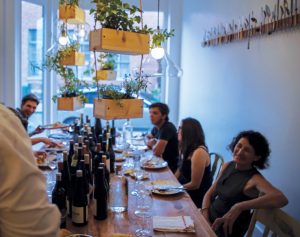 As guests arrive, they’re invited to a long, narrow table in an adjacent room, where they can purchase a pre-dinner glass of wine, beer, or other beverage from the restaurant’s extensive list. Seating assignments at dinner are indicated by playing cards: each guest receives one, then matches it to their place setting. At the table, they’re greeted by the first course; one evening last spring, it was wooden serving boards groaning with roasted vegetables and a hefty loaf of crusty bread—one platter per two diners—plus an array of dips, spreads, and flavored butters. That night, the menu featured a second course of rhubarb gazpacho with cucumber, cream, celery, and orange; it was followed by pastrami with pickled carrot, caper, radish, and miso butter. The fourth course: chicken rillettes with daikon, fiddlehead ferns, ramp, mushroom, and black olive. (FLX also accommodates special diets; for vegetarians that night, fennel replaced the pastrami, and celery root subbed for chicken.) Dessert was angel food cake with chocolate mousse, cashew butter, fruit preserve, and cashew brittle—and when the servers supplied individual spatulas for scraping every drop off the plate, guests tucked in with gusto. “Ultimately for us, it’s not about the food, it’s about the fun,” Bates says. “It’s about doing things that make people smile, and making a connection. It is fancy—we make precise plates and textures—but I don’t want you to leave feeling like you’ve been buttoned up all night. I want you to leave going, ‘That was awesome.’ ”

Given Bates’s background as a master somm—a designation requiring a notoriously tough multi-part test, which only 158 Americans have ever passed—wine features heavily in the FLX Table experience. Guests can opt for pairings (a four-ounce glass with each course) ranging from $35 to $275; a beer pairing is also available for $35. The high-end wine pairings, Bates says, have been a major draw. “The wines we pour are pretty crazy,” he says. “It’s one of the things that’s gotten us the most attention, because they’re wines you don’t get to taste anywhere else—some historically significant wines, and then some younger, hard-to-get, really exciting things.”

While Bates and Bogadtke—whose training is in front-of-house hospitality—originally ran the restaurant themselves, they’ve since hired other staff including a chef de cuisine and a wine director. Bates admits that delegating has been a bit challenging. “For many years, Isabel and I were the people that did things for other owners,” he explains. “We’ve had to grow and adapt to being the owners and allow other people to do the things.” Bates grew up cooking with his mom—they’d routinely do elaborate weekend projects like baking croissants—and even learned to make sushi at age three. He started working in restaurants as a teenager, and logged sixty-hour weeks cooking in Statler kitchens as an undergrad to help pay for Cornell. After graduation, his travels took him around the U.S. and Europe; he met his future wife while working in a winery in German’s Mosel region. They managed small luxury hotels in Texas and Pennsylvania before relocating to Bates’s native Upstate New York—drawn by its natural beauty, the chance to start their own business, and a desire to help revive the local economy. “I lived through the days of watching Xerox and Kodak crumble, seeing what it did to families,” he says. “We wanted to be a part of bringing that livelihood back to the area.”

And FLX Table is just one part of the couple’s expanding food and beverage empire. In 2014, they opened FLX Wienery, which sells what they call “high-end lowbrow food”—roadside fare like hot dogs, hamburgers, fries, and milkshakes. Located in Dundee (half an hour south of Geneva), it offers chili dogs and deep-fried Oreos, but also upscale dishes like “fries royale” with foie gras, pecorino, truffle mayo, and herbs. “For me, food and restaurants aren’t about expense—they’re not about how fancy a product is,” says Bates. “They’re about the passion, love, craft, and attention that you put into them. So it doesn’t matter to me whether I’m making a hamburger or serving truffles and caviar, as long as we’re treating people with compassion and bringing joy to their day.”

This May, the couple opened FLX Fry Bird, a fried chicken joint a few doors down from Table, where the menu includes whole birds, chicken and waffles, and sides like mac and cheese. Adjacent to Fry Bird is FLX Provisions, which offers tastings and sales of New York wines, and sells beer and local food products. The couple also runs a small brewery, FLX Culture House, which makes sour Belgian-style beers. (It isn’t open to the public, but supplies libations to their other establishments.) Then there’s Feast & Co., their catering company—and Element Winery, which Bates founded with his dad in 2005, and which recently purchased seventeen acres of vineyards on Seneca Lake’s east side. “There’s a lot of moving parts and complexity, but it keeps my brain occupied,” Bates says of his many ventures. “I’m not good at focusing on one thing, so I like to have a lot going on—to make wine one day, cook another day, do computer work one day and construction another. It keeps me excited and keeps me from getting bored. But most of all, I like that we’re able to make customers happy.”

For more suggestions on where to dine in the Ithaca area, check out our May/June 2015 feature “Tasty Town.”