POLO Cornell returned to the U.S. Polo Association National Intercollegiate Championships, where both the men’s and women’s teams lost in the semifinals. Lorenzo Masias ’20 and Shariah Harris ’20 (at far left in photo above) were each named to a national all-star team.

GYMNASTICS Kaitlin Green ’19 earned her third national title in April, winning the balance beam at the USA Gymnastics Collegiate Championships. She’s the only multi-time national champion in program history after winning both the beam and uneven bars in 2017. As a team, the Big Red qualified for the USAG Collegiate Championships for the fourth consecutive season and finished third in the semifinals.

EQUESTRIAN The Big Red won both regional and Ivy championships in 2019. Cornell had five first-place finishers at the regional show: Vaughan Shanley ’19 in the open fences and open flat, Emily Selland ’19 in the intermediate fences, Haley Harder ’20 in the novice fences, and Mackenzie Raucher ’19 in the walk-trot-canter.

WOMEN’S TRACK AND FIELD Briar Brumley ’19 and Gabrielle Orie ’21 took first and second in the 3,000-meter steeplechase to help Cornell to third place at the ECAC Outdoor Championships. Leone Farquharson ’22 came away with a win in the triple jump while Kellian Kelly ’21 finished first in the 200 meters. The Big Red was also third at the Heptagonal Championships, with wins by Brumley in the steeplechase and Beatrice Juskeviciute ’22 in the heptathlon.

MEN’S LACROSSE Ryan Bray ’19, Brandon Salvatore ’20, and Jeff Teat ’20 earned first-team All-Ivy honors. Bray had 19 ground balls as a short-stick defensive midfielder; Salvatore was among the national leaders in caused turnovers; and Teat led the team with 70 points on 34 goals and 36 assists. The Big Red finished the season 10-5, but was denied an NCAA tournament bid after losing to Yale in the Ivy semifinals. 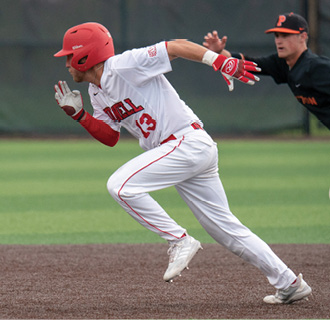 BASEBALL The program celebrated its 150th anniversary with a weekend celebration, including a ceremony and tailgate, during the last home series of the season. The current squad took two out of three games against Penn, both of them dramatic wins: one featured a walk-off triple from Adam Saks ’19 (right), the other a two-out walk-off homer from Will Simoneit ’19.

NCAA Former Big Red gymnast Morgan Chall ’19 will serve as 2019–20 chair of the NCAA Division I National Student-Athlete Advisory Committee (SAAC), which represents athletes in the NCAA governance structure and legislative process. Chall is also a member of the NCAA Division I Board of Directors, the top governing body for Division I. She previously chaired the national SAAC’s education team and has been a member of both the Cornell and Ivy League SAAC.

MEN’S HOCKEY Mitch Vanderlaan ’19 signed an amateur try-out contract with the Utica Comets, where he played in two games; Matt Nuttle ’19 inked a similar deal with the South Carolina Stingrays, where he collected a goal and an assist while appearing in five playoff and two regular season games. Also, a pair of former Big Red teammates distinguished themselves overseas. For the third time in six years with SC Bern, Justin Krueger ’10 helped his team to the championship of the top tier in Switzerland’s hockey system. Meanwhile, Brendon Nash ’10 spent 2018–19 with Rytiri Kladno in the second division of Czech hockey. Nash had seven goals and 22 assists in 49 regular season games and helped the team advance through a qualification tournament to return to the top rung in the Czech system.

BASEBALL Former Big Red player Kyle Gallagher ’18, now an MBA student at Duke, was the Blue Devils’ starting left fielder for most of the 2019 season. Gallagher played in 45 regular season games, hitting .238 with six homers (second-best on the team) and 22 RBIs. 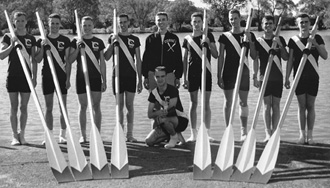