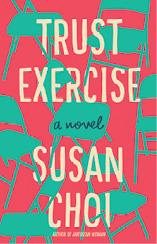 The latest by Choi—a Pulitzer finalist for her novel American Woman—is set in a suburban high school for the performing arts in the early 1980s. The school is a powder keg of high emotion and intense ambition, where a guru-like teacher named Mr. Kingsley reigns supreme. “So much of what they do, with Mr. Kingsley, is restraint in the name of release,” Choi writes, describing an acting class. “It seems they have to throttle their emotions to have complete access to them.” The plot centers on a romance between two students, a complex relationship that—amid narrative twists—may not be what it seems. The New Yorker calls the novel “thrillingly interesting,” noting that it “circles varieties of trust like a thief casing a jewelry store: the trust between teacher and student, performers and audience, a writer and her subject, a writer and her reader.”

In this hardcover for young readers published by the Lab of Ornithology, an energetic Manhattan girl discovers the quiet joy of bird watching when an older friend takes her to Central Park in search of a golden-winged warbler. The colorful illustrations (by artist Claudia Dávila) were vetted for avian accuracy by the Lab, where Thompson is a staffer. “With a bird on each spread and a key in the back, it serves as a Where’s Waldo-type introduction to birding guides,” says Kirkus, “one readers can return to again and again.” The book also includes a poster, information on joining the Lab’s citizen science project on urban birding, and tips for kids on taking nature walks.

Vanden Heuvel’s distinguished and wide-ranging résumé includes serving as special assistant to U.S. Attorney General Robert Kennedy, counsel to New York Governor Averell Harriman, deputy ambassador to the United Nations, chairman of the New York City Board of Corrections, and president of the International Rescue Committee. In this Cornell University Press release—subtitled A Memoir of Tumultuous Times—vanden Heuvel reflects on his career, contemplating such historic events as the Vietnam War, the Soviet invasion of Hungary, the JFK assassination, the Attica prison riot, and the Iran hostage crisis. “Peace is not just the absence of war,” he observes. “It involves the creation of a civil society based on the rule of law and the respect for the dignity of every individual.”

Hartley is an attorney and mediator who promotes a collegial approach to divorce; Brower is a longtime teacher of yoga and meditation. In this self-help guide—whose cover features a blurb from actress Gwyneth Paltrow, who famously called the amicable dissolution of her marriage a “conscious uncoupling”—they offer practical tips on ending a union with a positive mindset and a minimum of rancor. Individual chapters promote their five-step process of patience, respect, clarity, peace, and forgiveness. “You may now officially dissolve your misconceptions about divorce: the battle, the negative legacy, the stigma, the loneliness, the gossip,” they write. “Starting now, you’ll choose the tone of your approach. Regardless of what others are choosing, you can choose to be generous, gracious, and aware of the consequences of your actions.”

A physician on the Medical College faculty, McCarthy is also a prolific author who has penned two memoirs (one on his intern year, the other on pitching in baseball’s minor leagues) and contributes book reviews to USA Today. Here, he warns of the rising threat of so-called “superbugs”—bacteria, like methicillin-resistant Staphylococcus aureus (MRSA), that have evolved the ability to evade previously powerful antibiotics. The book includes a look at the history of antibiotic development—from the battlefields of World War I onward—as well as a chronicle of a recent clinical trial on a promising antibiotic that McCarthy and a colleague conducted at Weill Cornell’s teaching hospital. “Insightful and honest,” says Kirkus, “McCarthy effectively combines useful information about the latest advances in microbial research with accounts of the best aspects of humanity.”

In her second poetry collection, Alleyne—who emigrated to the U.S. from Trinidad and Tobago and is now an English professor at James Madison University—contemplates such themes as belonging, joy, sorrow, loss, family, alienation, homecoming, and the African American experience. In “Play,” subtitled “An Elegy for Tamir Rice,” she laments the death of a twelve-year-old boy who was killed by a police officer: “I play / the video again and again / trying to hit stop / in time to keep him / alive. I make a black boy / Lazarus of him, minus / the miracle: the bullet, / faster than fingers or hope, / wins every time.” Says Tracy Smith, the current U.S. Poet Laureate: “Honeyfish is an elegy for all the countless lost, and a praise song for the many black lives that persist in their wish to give and receive love.”