FOOTBALL  Chris Fraser ’17 made history last fall when he became the first Big Red player to earn first-team all-Ivy League honors four times. He finishes his career as the league’s career leader in yards per punt at 42.8. He is only the third Ivy player to earn four first-team honors since freshmen were granted full eligibility in 1993. Fraser was joined on the first team by safety Nick Gesualdi ’18 and running back Chris Walker ’19. It’s only the third time in 20 years that Cornell has had three first-team picks.

WRESTLING For the past 14 years, the top college teams in the country have met in Chattanooga for the Southern Scuffle. 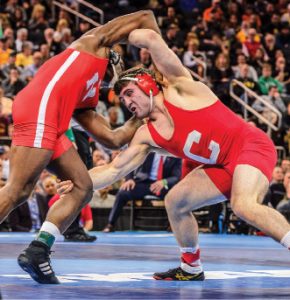 This January, Gabe Dean ’17 became just the third wrestler to win four titles at the event. Dean went 4-0 at 184 pounds and finished the tournament with a 5-2 win. Dean also won the 184-pound title at the Cliff Keen Invitational in Las Vegas in December, becoming the eighth wrestler, and third from Cornell, to win three titles at the prestigious tournament.

WOMEN’S TENNIS Four players enter the 2017 spring season regionally ranked as a result of impressive play during the fall. The doubles team of Priyanka Shah ’18 and Mariko Iinuma ’19 is ranked sixth by the Intercollegiate Tennis Association after reaching the quarterfinals of the Northeast Regional Championships in October. The tandem of Marika Cusick ’17 and Alexandra D’Ascenzo ’17 is ranked 10th after posting a 12-match winning streak. Cusick is also ranked 16th in singles on the strength of a win at the Cornell Invitational and a trip to the semifinals in another tournament.

MEN’S BASKETBALL Robert Hatter ’17 is the 26th Cornell player to amass 1,000 points, a mark he attained during a 79-69 loss to USC in Los Angeles in December. He finished the game with 20 points, four rebounds, and two assists. It was the 15th 20-point outing of his career, including a school freshman record of 32 points in November 2013.

WOMEN’S HOCKEY Three current players and one alumna earned silver medals at the 2017 Nations Cup as members of Canada’s National Women’s Development Team. Jaime Bourbonnais ’20 was second in scoring while making her first appearance with the squad as Canada went undefeated in pool play and reached the final before losing 1-0 to Finland in the title game. Micah Hart ’19 and Kristin O’Neill ’20 also collected points during the tournament while Jillian Saulnier ’15 served as captain and scored a goal.

MEN’S SOCCER Bruce Arena ’73 has returned as head coach of the U.S. Men’s National Soccer Team. Arena led the squad from 1998 to 2006, guiding the team to a fourth-place international ranking and a trip to the World Cup quarterfinals in 2002. Arena had been serving as head coach of the Los Angeles Galaxy in Major League Soccer, leading the team to three championships. He was a star soccer and lacrosse player on East Hill before winning two MLS titles as coach with DC United and five NCAA Division I titles at the University of Virginia.

CREW Bob Clark ’51 has given $3 million to establish an endowed fund to support the Big Red men’s heavyweight crew program. Clark was a four-year member of the team while on the Hill and later won 27 gold medals and 10 world championships on the masters circuit.

MEN’S HOCKEY Former Cornell teammates Jacob MacDonald ’15 and John McCarron ’15 were named to the ECHL all-star team. (Formerly known as the East Coast Hockey League, the ECHL is a minor league, two tiers below the NHL.) Second among the league’s defensemen in points as a member of the Toledo Walleye, MacDonald was named a starter before being called up to the Albany Devils in the American Hockey League. McCarron collected 30 points (12 goals and 18 assists) in 29 games for the Florida Everblades—where Craig Brush ’72, a member of the Big Red’s undefeated national title team of 1970, serves as president.