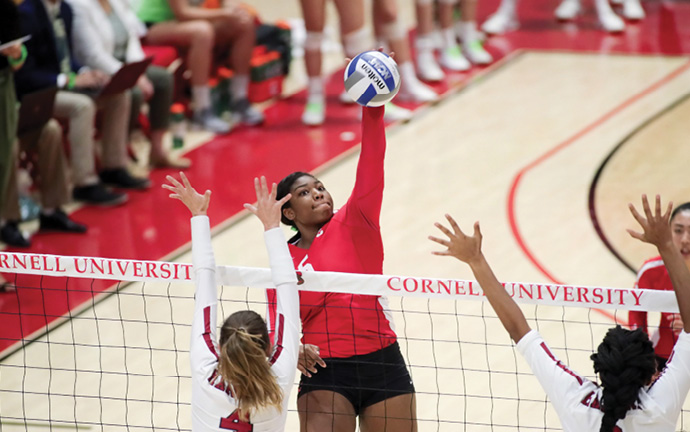 VOLLEYBALL Jillienne Bennett ’22 (above) earned first-team All-Ivy honors after helping the Big Red to its best season in 10 years and a third-place finish in league play. Bennett recorded double-digit kills in eight of her 19 matches this season, including an 18-kill performance against Hartford. Cornell finished 17-6,
posting the most wins since the 2006 team went 18-9. The third-place Ivy finish was Cornell’s third in a row, marking its most successful run since three firsts and a second from 2003 to 2006. 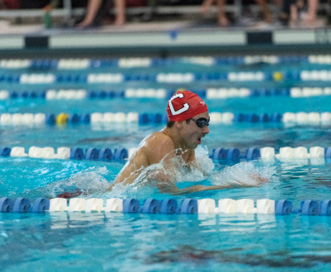 FIELD HOCKEY Maddy Conklin ’20 and Maddie Henry ’20 were named to the 2019 Longstreth/NFHCA All-Mideast Region team—marking the first time in almost two decades that two Cornell field hockey players have earned first-team all-region honors in the same season. (Lindsay Grace Vaughn ’04 and Carissa Mirasol Nee ’04 achieved it in 2002.) Henry, who was also named the Ivy League Defensive Player of the Year, backstopped the Big Red defense, finishing second among Ivy goaltenders with a 1.82 goals-against average and .762 save percentage. Conklin was another key part of the Big Red’s defensive success from her midfield position, while scoring one goal and collecting four assists.

WOMEN’S HOCKEY After opening the season with three straight shutouts, Lindsay Browning ’21 was named the ECAC goalie of the month for November. A backup for her first two seasons on East Hill, Browning had no problem adjusting to the starting role this season, losing only once in her first 19 starts while allowing less than a goal a game and stopping more than 95 percent of the shots she faced. She’s only the second Cornell goalie to earn ECAC monthly honors, joining Lauren Slebodnick ’14, who did so twice in 2013.

MEN’S SOCCER Ryan Bayne ’20 and John Scearce ’20 both earned first-team All-Ivy honors as the Big Red saw a total of five players honored by the league, the most since 2013. A three-time captain, Bayne
was a stalwart on the Big Red defense, playing 1,462 of a possible 1,503 minutes this season; he scored two goals including a game-winner against Akron, which resulted in Ivy player of the week honors. Scearce led the team with five goals, four of which came in the last five games of the season. Cornell finished 10-5-2 and was third in the Ivies, its best showing since winning the title in 2012.

MEN’S HOCKEY For the second time in three seasons, the Big Red took a turn atop the national polls, occupying the number-one spot in early January after opening the season 12-1-2. It’s no surprise, then, that Cornell was well represented in the ECAC’s early season awards: in November, Matthew Galajda ’21 was named goalie of the month while Sam Malinski ’23 was rookie of the month.

FOOTBALL A pair of former Big Red quarterbacks have found new coaching jobs for the 2020 season. In January, Bill Lazor ’94 was named offensive coordinator for the NFL Chicago Bears. He previously held the same position for the Cincinnati Bengals, Miami Dolphins, University of Virginia, and University at Buffalo. In December, Ricky Rahne ’02 was named head football coach at Old Dominion University after four years as an assistant coach at Penn State, including the last two as offensive coordinator. He previously served as an assistant at Vanderbilt, Kansas State, Holy Cross, and Cornell.

WOMEN’S ROWING Cecelia Madsen ’12, MPH ’19, has returned to the program as an assistant coach after holding a similar position in 2012–13 and serving as an assistant coach for men’s rowing from 2016 to 2018. Madsen earned second-team All-American honors her senior year, helping the Big Red to a second-place finish in the Ivy championship and 11th at the NCAA championship.

WOMEN’S HOCKEY Laura Fortino ’13 and Rebecca Johnston ’11, BS ’12, took a turn on one of hockey’s biggest stages, playing for a team of Canadian stars in an Elite Women’s 3-on-3 game against a team of Americans during the NHL All-Star Weekend in St. Louis in January. Johnston scored the opening goal of the game on a breakaway as the Canadians skated to a 2-1 victory.