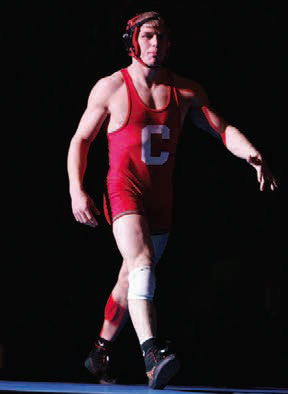 Alone in the spotlight: Kyle Dake ’13 is a four-time NCAA champion.ATHLETIC COMMUNICATIONS

On March 23, Cornell senior Kyle Dake accomplished something that no other wrestler has ever done: he won his fourth straight NCAA championship in his fourth weight class. In each year of his college career, Dake competed at a different weight: 141 pounds as a freshman, 149 as a sophomore, 157 as a junior, and 165 as a senior. Each time he reached the pinnacle of his sport, ending the season as the national champion in his class. Dake was named the Outstanding Wrestler of the 2013 NCAA tournament and completed his Cornell career with a record of 137-4.

Dake is a native of Lansing, New York, outside of Ithaca, where his father, Doug Dake, is the high school wrestling coach. Kyle Dake was a phenom even in high school, when he won two New York State championships. His prominence caught the eye of Cornell coach Rob Koll, who was more than happy to welcome Dake to the Big Red program. In addition to his NCAA honors, Dake has been named Wrestler of the Year for three straight years by the Eastern Intercollegiate Wrestling Association. (In his first year at Cornell, he was the EIWA Freshman of the Year.) To top it off, he was awarded the 2013 Dan Hodge Trophy as the nation’s premier collegiate wrestler.

In Dake’s final NCAA tournament match, he faced Penn State’s David Taylor, a close friend and formidable foe. Taylor was the previous year’s champion at 165 pounds, when he was the NCAA’s Wrestler of the Year and winner of the Hodge Trophy. The match was close, with Taylor scoring the initial two points—the first scored on Dake in the tournament. Dake rallied to take a 4-2 lead, but Taylor evened the score at 4-4 before the Big Red wrestler earned a final point—and the championship—for riding time. Dake was featured on ESPN’s “SportsCenter” after the match and has been the focus of national publicity about the sport since his historic win. He is only the third Cornell athlete to be named the NCAA’s Outstanding Wrestler of the Year; the others were Frank Bettucci ’53, MBA ’58, and David Auble ’60, MBA ’62.

Dake is by no means the only star in the Big Red wrestling firmament. At the NCAA tournament, teammates Nashon Garrett ’16, Mike Nevinger ’14, and Steve Bosak ’13 were named All-Americans, and the Cornell team finished fifth overall. Garrett, who placed third in the nation at 125 pounds, was named the EIWA Freshman of the Year and ended his first year on the team with a mark of 43-5—a school record for most wins in a single season. 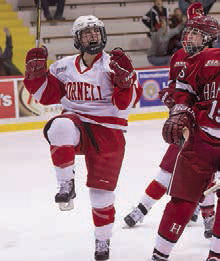 CHAMPS AGAIN For the third time in four years, the women’s hockey team took home the ECAC Championship, this time beating Harvard 2-1 in the title game on a goal from Jessica Campbell ’14 with less than two minutes to play. Brianne Jenner ’14 was named a first-team all-American as well as the ECAC and Ivy League Player of the Year. Teammate Lauriane Rougeau ’13 earned second-team All-American honors for the fourth time. Jenner and Rougeau were also named to the Canadian team that competed at the IIHF World Championships in early April, along with Laura Fortino ’13 and Rebecca Johnston ’12.

PHOTO FINISH Cornell has won 12 Ivy League titles in men’s indoor track and field, but few as dramatic as the 2013 championship, which came down to the final event. The Big Red finished one point ahead of Princeton despite the Tigers taking the last race, the 1600 meter relay, by five one-thousandths of a second. Nick Wade ’13 was named the meet’s most valuable performer after finishing second in the mile and 1,000-meter run and running the third leg of the winning 4X800-meter relay. The women’s team finished second at the Heptagonal meet, 4.33 points behind champion Harvard.

CORNELL MOMENT When Colin Greening ’10 scored with 24 seconds left to lift the Ottawa Senators to a 3-2 win over the Toronto Maple Leafs in February, Cornell hockey fans, and Greening himself, toned down the celebration—because the goal was scored on Greening’s former teammate (and former roommate) goalie Ben Scrivens ’10. “Being able to score on Ben is one of those weird situations,” Greening told the media after the game. “You always want him to do well, but not too well, but you’ve got to do what you’ve got to do.” 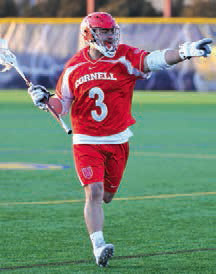 NUMBER ONE Attackman Rob Pannell ’12 became Cornell’s all-time scoring leader in men’s lacrosse when he collected an assist on a goal by Steve Mock ’13 in the fourth quarter of a 10-5 win over Penn on March 23. The assist was the 297th point for Pannell, one more than Mike French ’76, MPS ’78, scored in three seasons from 1974­ to 1976. Three days later, Pannell, who received a fifth year of eligibility after missing most of the 2012 schedule with a broken foot, became the eighth player in NCAA Division I to reach 300 points when he collected two goals and three assists in a 17-9 win over Siena.

ROW, ROW, ROW As Spring rowing season moves ahead, Cornell fans can savor the early successes of the Big Red crew in The Rise of Cornell Rowing 1871–1920 (St. Magnus Press), a book by Eric Langstedt ’01. A newcomer to the national rowing scene, Cornell made a big splash in July 1875 when its freshmen and varsity crews were surprise winners at the intercollegiate regatta. They repeated the sweep a year later—and the rest, as they say, is history.

FLYING HIGH Cornell came away with three individual titles and a second-place finish at the 2013 ECAC Women’s Gymnastics Championships in March. Melanie Jorgensen ’14 earned first place in the bars and was named the ECAC Specialist of the Year after the meet. Alicia Bair ’16 and Sarah Hein ’13 shared the title in the vault with identical scores of 9.800. Cornell’s team score of 193.250 was a season high, but fell a half-point short of first place Penn.

FANCY FOOTWORK A pair of former men’s soccer players made some off-season news. Scott Palguta ’05 was named assistant men’s soccer coach at Colorado College after spending four years as a defender for the Colorado Rapids in Major League Soccer. And Daniel Haber ’14 picked up another accolade for his 2012 season when was he named winner of the 2013 Marty Glickman Outstanding Male Jewish Scholar Athlete of the Year. Unfortunately for Cornell, Haber passed up his senior season to sign a professional contract with Maccabi Haifa in Israel.

MOVING UP The men’s tennis team continued its ascent on the national scene, occupying the 24th spot in the International Tennis Association’s rankings on February 26. The Big Red jumped 39 spots from its previous ranking, largely thanks to winning their second ECAC Indoor title in three seasons. Cornell’s previous best national ranking was 40th in the spring of 2011.

SHARK TO PENGUIN Defenseman Doug Murray ’03 has a new home as the NHL veteran was traded to the Pittsburgh Penguins in late March. Murray spent eight seasons with the San Jose Sharks, where he led the team in hits for the last five seasons. Murray is in the last year of a four-year contract worth $10 million and is slated to be an unrestricted free agent after the season ends.