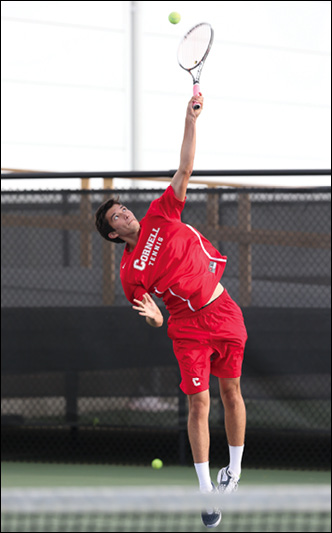 TENNIS Although the bulk of its schedule is held in the spring, the Big Red men’s tennis team made some waves this fall. Colin Sinclair ’17 won the Lenz Singles Bracket at the Ivy Plus tournament in September, his first tourney title in almost two years. Chris Vrabel ’17 and
David Volfson ’19 reached the final at first doubles in the same event. Volfson was ranked number two among the nation’s freshmen in the initial Intercollegiate Tennis Association standings released in September.

ROWING Greg Davis ’16 earned a silver medal at the World Rowing Under 23 Championships held in Plovdiv, Bulgaria, in July. Davis was a member of the U.S. heavyweight eight that finished second to Germany in the final. He was joined in Bulgaria by Ned Benning ’16, who competed in the men’s double scull, and Marco Bustamante ’18, who rowed in the lightweight four. Meanwhile, five Cornell rowers earned medals at the Royal Canadian Henley Regatta. Joel Cooper ’17, Christian DiGiocomo ’17, and Rich Rosin ’18, rowed for the New York Athletic Club’s winning under-23 men’s eight boat while Joe Pinnola-Vizza ’18 and James McManus ’18 rowed for the Conshohocken Rowing Center and won the under-23 men’s lightweight pair.

TRACK AND FIELD Taysia Radoslav ’18 earned two medals at the Panamerican Junior Track and Field Championships, held in Edmonton, Alberta in August. Competing for Canada, Radoslav finished second in the women’s 400 meter hurdles, and then collected a bronze medal in the 4×400 meter relay. 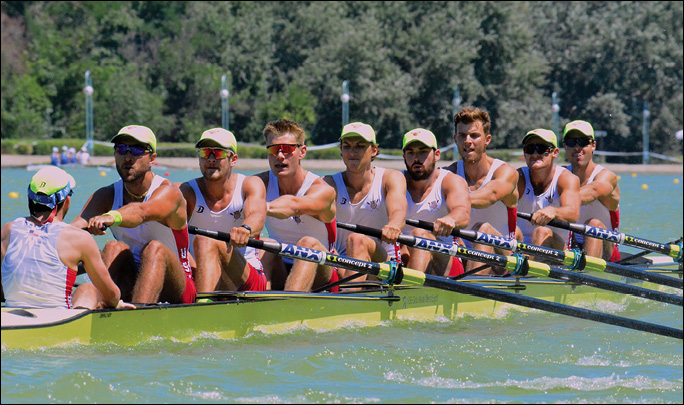 FOOTBALL Cornell gridiron legend Pete Gogolak ’64 and his brother Charlie have been named winners of the National Football Foundation’s Outstanding Contribution to Amateur Football Award for 2015. The brothers introduced soccer-style kicking to football. During his time on East Hill, Pete set several NCAA placekicking records—many of which were broken by Charlie, who played at Princeton. Pete went on to enjoy a long and successful professional playing career.

MEN’S LACROSSE Despite a storied career that has included the highest individual accolades, one achievement had eluded Rob Pannell ’12, BS ’13: a national championship. That changed this summer as he helped lead the New York Lizards to the Major League Lacrosse title. Pannell paced the league in scoring with 68 points on 38 goals and 30 assists, then scored four goals to help the Lizards to a 15-12 win over the Rochester Rattlers in the title game.

BASEBALL Former Big Red pitcher Brent Jones ’15 struggled with injuries during his second professional season, making sixteen appearances for three minor league teams. Jones started and finished the season with the Class Kane County Cougars, going 2-5 with a 4.15 ERA. He was a fourth-round pick of the Arizona Diamondbacks in 2014, the earliest any Cornell player has gone in the baseball draft.

POLO A former Cornell player now how holds one of the top management positions in polo. Duncan Huyler ’83 is CEO of the United States Polo Association, the national governing body. Co-captain of the 1983 men’s team that finished as national runner-up, Huyler has served as CFO for several financial firms.

BASEBALL In August, Dan Pepicelli was named Cornell’s new head baseball coach, replacing Bill Walkenbach ’98, who left after seven seasons to become head coach at Claremont-Mudd-Scripps. Pepicelli comes to the Hill after six years as the pitching coach at Clemson University, where he helped the Tigers to a College World Series appearance. He previously served as head coach at St. John Fisher and Hartwick. Joining Pepicelli is assistant coach Frank Hager ’12.