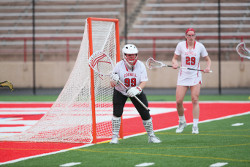 WOMEN’S LACROSSE Renee Poullott ’17 represented Cornell in the Intercollegiate Women’s Lacrosse Association Division I Senior All-Star Game in June. She played the first half in the net, allowing just three goals and making four saves while facing 11 shots to help the North team to a 16-11 win. A month earlier, Poullott became the winningest goalie in Big Red team history by posting her 41st win in a 12-7 victory over Notre Dame in the first round of the NCAA playoffs. Her season goals-against average (8.62) was seventh best in the country, and her save percentage (.506) was eighth. 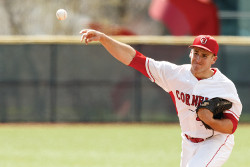 BASEBALL For the first time ever, three Big Red players heard their names called in Major League Baseball’s First Year Player Draft. Pitcher Paul Balestrieri ’17 was the first CU player selected, going to the St. Louis Cardinals in the 26th round; Peter Lannoo ’17 later went to the San Francisco Giants and Justin Lewis ’18 to his hometown Los Angeles Dodgers. All three inked contracts with their team’s minor league affiliate, as did Cole Rutherford ’17, a free agent signed by the San Diego Padres.

MEN’S TRACK AND FIELD Rudy Winkler ’17 became the fourth Cornell track and field athlete, and the first in nine years, to garner an NCAA national title when he won the hammer throw at the 2017 Division I Championships with a distance of 243 feet, 2 inches. He finished his Cornell career with five All-American honors, three in the hammer throw and two in the weight throw.

WOMEN’S TRACK AND FIELD Taysia Radoslav ’18 garnered All-American honors for a second time after earning second-team honors in the 400-meter hurdles at the NCAA Division I Championships. Her time of 58.99 was fast enough for a 15th-place finish. Shannon Hugard ’18 was an honorable mention All-American after placing 23rd in the 1,500 meters during her first appearance at the national meet.

WOMEN’S ROWING Tracy Eisser ’12 earned a silver medal in the women’s pair at the 2017 World Rowing Cup III in Lucerne, Switzerland. Eisser and her partner lost to the world record holders from New Zealand by just under five seconds to win the only US medal at the event. They also won two national events, Spring Speed Order I and National Selection Regatta I, earlier in the season after rowing in a quadruple scull at the 2016 Olympics.

MEN’S LACROSSE Mitch Belisle ’07 and Jason Noble ’13 helped the Georgia Swarm to its first National Lacrosse League championship. Noble was named the NLL’s Defensive Player of the Year; Belisle had two goals and one assist while winning his second league crown.