WOMEN’S TRACK Cornell was well-represented at the Canadian Track and Field Championships in July with five athletes competing. Marguerite Lorenzo ’21 (below, at an Outdoor Heps event) posted the best finish of the group, taking second in the women’s high jump in the under-20 division with a jump of 5 feet, 7-1/4 inches. Taysia Radoslav ’18 was third in the open division of the 400 meter hurdles, posting a seasonal best of 58.99 seconds in the final. Other open division runners included Brittany Stenekes ’19, who was fifth in the 100 meter hurdles (13.77 seconds), and Annie Taylor ’19 who was 20th in the 1,500 meters (4:34.15). Brooke Overholt ’22, also in the under-20 division, was sixth in the 100 meter hurdles and eighth in the 400 meter hurdles. 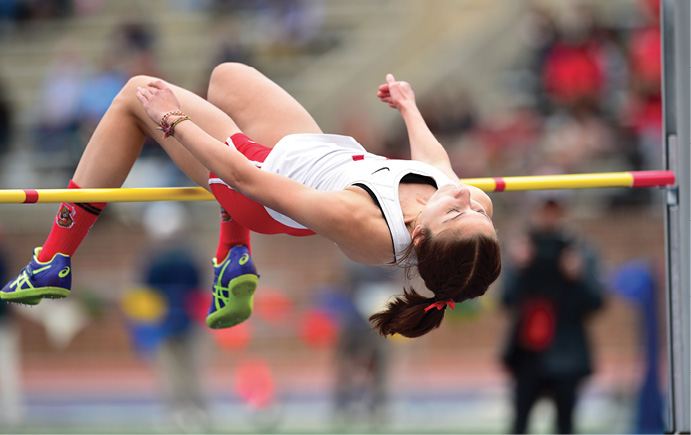 SAILING The Big Red finished seventh at the Sperry Women’s National Championships in May, its best result at the event since becoming a varsity team in 2014. The B-division tandem of Daisy Holthus ’21 and Adeline Sutton ’21 posted the squad’s best results, finishing fifth out of 18 teams, with two wins and 11 top fives in their 18 races. The A-division boat, which was shared by Sebby Turner ’19, Gabby Rizika ’19, Diana Otis ’18, and Tara Bergstrom ’18, had four top fives and finished 13th.

BASEBALL The Big Red placed five players on the post-season All-Ivy award list, led by first-team selections Ryan Krainz ’18 and Ellis Bitar ’18. Krainz is only the sixth Cornell player to earn multiple first-team All-Ivy honors and the first to do so at different positions, moving from shortstop to second base. Bitar is Cornell’s first first-team all-league pick at catcher since 1988, when Guy Leach ’88 was honored by the Eastern Intercollegiate Baseball League. Will Simoneit ’19 was a second-team pick for the second straight season, spending most of his time at third base this year after starting at catcher last season. First baseman Trey Baur ’18 and
designated hitter Dale Wickham ’18 both earned honorable mention. 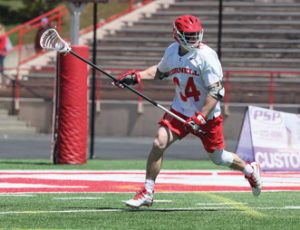 MEN’S LACROSSE Jake Pulver ’18 (right) won the 2018 Senior CLASS (Celebrating Loyalty and Achievement for Staying in School) Award for his sport. Given out by Premier Sports Management, it honors notable achievements in “community, classroom, character, and competition.” In addition to earning third-team All-American honors and captaining the team that won the Ivy tournament and reached the NCAA quarterfinals, Pulver maintained a 3.37 GPA as a biological sciences major and
coordinated several charity events.

WOMEN’S CREW The Collegiate Rowing Coaches Association has named Alexa Marcasciano ’20, Caroline Ressler ’20, and Katie Schretter ’20 National Scholar Athletes. To be eligible, student-athletes must have a cumulative GPA of 3.5 and compete in at least 75 percent of their boat’s races during the season. In other team news, women’s crew welcomed a new head coach this season. Eric Carcich takes over after ten seasons at George Washington University, where he was twice named the Atlantic 10 Coach of the Year.

BASEBALL In June, Paul Balestrieri ’17 threw a no-hitter for the Class-A Peoria Chiefs, a minor league affiliate of the St. Louis Cardinals. In a 6-0 win over the Kane County Cougars, Balestrieri needed only 100 pitches to finish the game while striking out six and walking none; the Cougars got on base just once, on a first-inning error. Balestrieri started the season with the Palm Beach Cardinals before joining the Chiefs. He was the Cardinals’ 26th-round pick in the 2017 draft and spent that summer with the State College Spikes in the New York-Penn League.

MEN’S HOCKEY Colin Greening ’10 etched his name into the Calder Cup, professional hockey’s oldest continuously awarded playoff trophy, by helping the Toronto Marlies to the American Hockey League championship. Greening was assistant captain of the Marlies squad that led the league in the regular season with a 54-18-2 record before going 15-5 in the playoffs. Playing in all 20 playoff games, Greening had four goals and five assists. John McCarron ’15 was a leading scorer for the Florida Everblades who finished as runner-up in the ECHL Kelly Cup playoffs. McCarron scored a team-high 29 goals during the regular season and ten in the playoffs for the Everblades, a minor league affiliate of the Charlotte Checkers in the AHL and the Carolina Hurricanes in the NHL.

FOOTBALL Former Big Red quarterback Chip Knapp ’87 has been named head football coach at Delaware’s Wesley College. Knapp has spent the past 28 years there as an assistant coach, mostly as offensive coordinator. Wesley has had 13 straight NCAA Division III playoff appearances, including six trips to the national semifinals.

MEN’S LACROSSE Connor Buczek ’15, MBA ’17, who is in his fourth season with the Florida Launch, scored a pair of goals to help Team MLL beat Team USA in the Major League Lacrosse all-star game in June. The game is played every four years to help Team USA prepare for the World Championship.