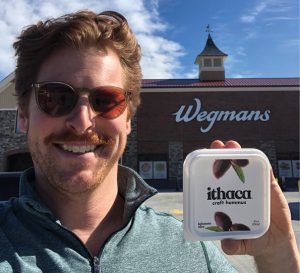 A matter of taste: Founder Chris Kirby ’15 outside a supermarket that carries Ithaca Hummus.Provided

Among the myriad delights for foodies grazing at the Ithaca Farmers Market in 2013 was a newcomer: a booth selling fresh, locally made hummus. Dubbed—appropriately enough—Ithaca Hummus, the start-up was one of many purveyors at the bustling lakeside venue offering free tastes to hungry passersby. But its owner—then an undergrad Hotelie with years of experience as a fine-dining chef—didn’t just aim to drive sales; for him, the booth was also an invaluable source of market research. “Every weekend I’d sample the product out to thousands of people who gave me their immediate reaction,” says Chris Kirby ’15, the company’s founder and CEO. “Not only did I get feedback on the product’s sensory qualities, I’d start to see a pattern of, ‘Who is my customer? Who am I solving a problem for?’ ” 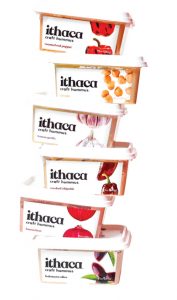 The current line-up of flavors.Jenna Ruocco

Flash forward seven years, and Ithaca Hummus has grown far beyond its namesake. The product is now available in more than 4,000 stores nationwide, at such major retailers as Target, Whole Foods, Wegmans, Publix, Stop & Shop, Hannaford, Gelson’s, ShopRite, and Giant. Retailing for about $5 for 10 ounces, it currently comes in seven varieties: classic, lemon garlic (the company’s original offering and still its best seller), lemon dill, lemon beet, roasted red pepper, smoked chipotle, and the recently released kalamata olive. Made from Kabuli chickpeas sourced from the Pacific Northwest, the hummus is certified kosher, has no preservatives or artificial flavors, and features wholesome ingredients like cold-pressed lemon juice and organic sunflower oil. “I think we’re starting to reshape the hummus category,” says Kirby, whose company participated in the prestigious Chobani Incubator for up-and-coming food brands in fall 2018, “and that’s very exciting.”

The company’s novel spin on a familiar food addresses that “problem” Kirby aimed to solve for his hypothetical target customer: the fact, he says, that “hummus you buy at the grocery store generally tastes like it was mass manufactured, not like it came out of your blender at home. And that’s what people want—for it to taste like it does in a restaurant or when they make it themselves.” A 2006 graduate of Johnson & Wales, where he earned an associate’s degree in culinary arts, Kirby had long dreamed of launching a national food brand; he chose the Hotel school specifically for the grounding in business he’d gain toward that goal. When he got to Ithaca—a foodie haven whose denizens prize locally made fare and where vegan and vegetarian offerings have been ubiquitous for decades—he was “absolutely shocked” to find that it didn’t already have a hummus maker. So he became one—first tinkering in his home kitchen, then (once he debuted at the market and began selling in retail locations like GreenStar Co-op and Ithaca Bakery) renting commercial production space outside of town. 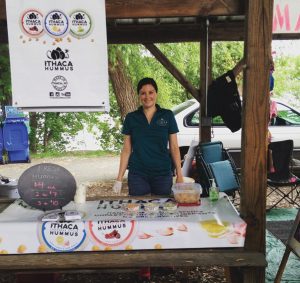 Grassroots marketing: Kirby’s wife, Anne, staffing the company’s booth at the Ithaca Farmers Market, where the hummus made its debut in 2013.Provided

From the beginning, the brand’s main selling point has been its fresh, homemade taste; even with national distribution, its production and preservation processes are built around retaining flavor as well as nutrients. “A lot of commercial hummus manufacturers will cook their chickpeas, then add all the ingredients and blend the mixture while it’s still hot,” explains Kirby, whose company was formerly known as Ithaca Cold-Crafted. “We go through the extra step of cooling the chickpeas down completely first, which ensures that the fresh lemon juice and garlic stay in their raw state.” Instead of the typical heat pasteurization, Ithaca Hummus uses a method called high pressure› processing, in which the finished containers are submerged in water and subjected to 87,000 psi of pressure—Kirby equates it to six times the force found at the bottom of the ocean—which kills bacteria and other pathogens, providing a commercial-grade shelf life.

The market-goers who sampled Kirby’s hummus back in 2013 included Bob Langkammerer, MMH ’98, then a chef at Wegmans, the supermarket behemoth with a wildly popular Ithaca megastore. A fellow Hotelie, Langkammerer helped introduce Kirby to Wegmans’ buyers; now vice president of culinary operations for Stew Leonard’s, a small supermarket chain in the New York metro area, Langkammerer says he’s been regularly tasting Ithaca Hummus as a “benchmark” while developing the company’s own line. “Hummus is a growing category; it’s a good way for Americans to eat healthier,” observes Langkammerer, adding, “Chris has done well for himself, and I’m proud of him.”

In contrast to the round tubs in which most hummus (including Kirby’s, initially) is commonly sold, Ithaca Hummus’s products are packaged in sleek, square containers with white lids. Not only are they dishwasher safe and reusable—something the company specifically encourages on its website—but the packaging has a minimalist, design-forward vibe. “It looks like the product—something that’s clean and doesn’t have a lot of chemicals in it,” says Neil Tarallo, a senior lecturer at the Hotel school who taught Kirby in an entrepreneurship course and served as his academic adviser. “His branding is a good representation of what he’s putting on the shelf.”

Kirby describes Ithaca Hummus—which Tarallo lauds as “the best on the market”—as Lebanese style. That means the lemon and garlic are much more prominent in the flavor profile, and it has less tahini (sesame paste), which makes it lighter and fluffier. For hummus fans accustomed to familiar brands like Sabra and Tribe, that distinctive flavor can be surprising, even off-putting; a review in the Washington Post last December that ranked eleven store-bought hummus brands put Ithaca dead last, slamming its “sour, bitter flavor” and “aggressive lemony punch.” Kirby is nonplussed. “You can’t please everybody, as much as we want to,” he says. “Our hummus is very different, and sometimes it can be shocking to people when they first try it; that’s not uncommon. But for every negative review—which I can probably count on my hands—we have hundreds of people who write in saying, ‘I can’t buy any other hummus now that I’ve tried yours.’ ”

But perhaps the most surprising of all: Ithaca Hummus isn’t made in or around Ithaca—at least not anymore. After manufacturing locally for several years, in August 2017 the company moved production ninety miles northwest of its birthplace, to a facility in Rochester that has the equipment for high pressure processing. In January 2019, that manufacturer, LiDestri Food and Drink, invested $2.7 million in new growth capital in Kirby’s company. Ithaca Hummus has since grown to a dozen employees and is officially based in Rochester; Kirby lives in Raleigh, North Carolina, and runs the business remotely with the aid of an on-site chief operating officer. As he explains: his wife, whose family hails from Raleigh, moved to Ithaca with him when he matriculated at Cornell—with the understanding that once his future food business was sufficiently established, they could relocate somewhere more to her liking. “And my wife,” he says, “hates the cold.”

2 thoughts on “Spread the Wealth”