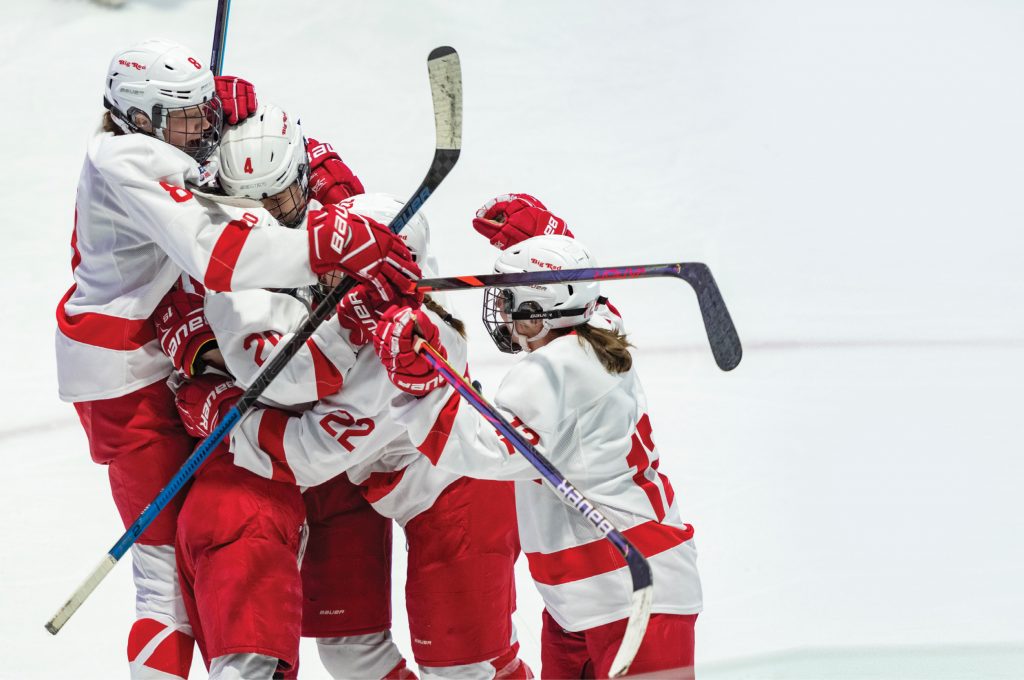 Thrill of victory: Women’s hockey players celebrate during a home game against St. Lawrence. The Big Red won 3-2, allowing the team to advance to the ECAC semifinal.Eldon Lindsay/Cornell Athletics

For four thrilling months this winter, Cornell enjoyed unparalleled success on the ice. Both the men’s and women’s hockey squads were winning nearly 90 percent of their games, and each spent time atop the national rankings. It all came to an abrupt and heartbreaking stop on March 14, when the NCAA announced that all winter and spring championships were canceled due to the COVID-19 virus. Cornell had been among the favorites to win a national title—maybe even two. But those dreams never had a chance to be realized, for reasons no one could have imagined. “It was gut-wrenching,” men’s team tri-captain Yanni Kaldis ’20 says of learning that the season was over. “We had heard other teams were pulling out, so we knew something was coming. But that final announcement was tough to accept. It left everyone with a big empty feeling.”

The women’s team was only days away from taking the ice as the NCAA tourney’s number-one seed when news of the cancellation broke. Women’s coach Doug Derraugh ’91 was informed just fifteen minutes before the start of a team meeting; when it convened, he realized that his players had already found out through social media. “There were a lot of tears shed, but we also talked about what we accomplished and all the great things they had done,” he says. “We pointed out that they’ll have many wonderful memories and that the spring sport athletes won’t have that opportunity. Still, for everything to end so abruptly was really hard.”

The women’s season had been nothing short of historic. The Big Red went undefeated through ECAC regular season play for the first time, going 19-0-3 to win its fifth regular-season championship before losing in overtime of the tournament title game. Cornell also spent the last five weeks of the season at the top of the national poll and finished with an overall record of 28-2-3, the third most wins in team history. “Reaching number one in the national rankings was a huge accomplishment, and with the way things ended it was nice to be able to go out in that spot,” says co-captain Micah Zandee-Hart ’20. “I think that really reflected our culture and consistency throughout the season. We were united as a group and had great depth both in scoring and defense.”

Individually, Lindsay Browning ’21 was honored as ECAC goaltender of the year after leading the NCAA in winning percentage (.894), goals-against average (0.91), and shutouts (12). Jaime Bourbonnais ’20 was named a first-team All-American and the ECAC’s best defenseman after leading the team with 40 points and 33 assists and anchoring a defense that allowed just 31 goals in 33 games; along with Zandee-Hart and three Big Red alumnae (Brianne Jenner ’13, BA ’15, Lauriane Rougeau ’13, and Jillian Saulnier ’15), she was named to the Canadian National Women’s Team for the 2020 IIHF Women’s World Championship, though the contest itself was canceled. Derraugh was› named national coach of the year by the American Hockey Coaches Association and US College Hockey Online and was also the ECAC and Ivy League coach of the year.

When the season ended, the men’s team was riding a nine-game winning streak and boasted a 23-2-4 record. The Big Red was 18-2-2 in ECAC play and won a third straight ECAC regular season crown. Like the women, they were also atop the final national rankings. “Getting to the number-one ranking is difficult and staying there is even harder,” says men’s coach Mike Schafer ’86. “The guys did a great job staying in the moment and improving. It’s a cliché in sports that you want to get better every day, but that’s what we did.”

Schafer was not only named ECAC coach of the year for a record fifth time, but was co-winner (with a colleague from the University of North Dakota) of the American Hockey Coaches Association’s national coach of the year award. Forward Morgan Barron ’21, a first-team All-American, was named ECAC player of the year after leading the team in scoring for the second straight season with 14 goals and 18 assists. He’s the first Cornellian to win the award since David McKee ’07 in 2005 and the Big Red’s first non-goalie to win it since Joe Nieuwendyk ’88 in 1987. “We were playing our best hockey at the end of the season, and I felt we were really at the top of our game,” says Schafer. “These guys just didn’t get the chance to prove how good they were in the postseason.”

Without national playoffs, the number-one rankings, league awards, and other honors will have to stand as testaments to the season. And despite the frustration of wondering what might have been, both teams are understandably proud of what they accomplished. “Beyond the wins and the rankings, I hope people will think of those great moments we had, both at Lynah and on the road—everything we shared, whether it was playing on the ice, watching from the stands, or following us from afar,” Zandee-Hart says. “I hope they remember all those great experiences, and not just how the season ended.” 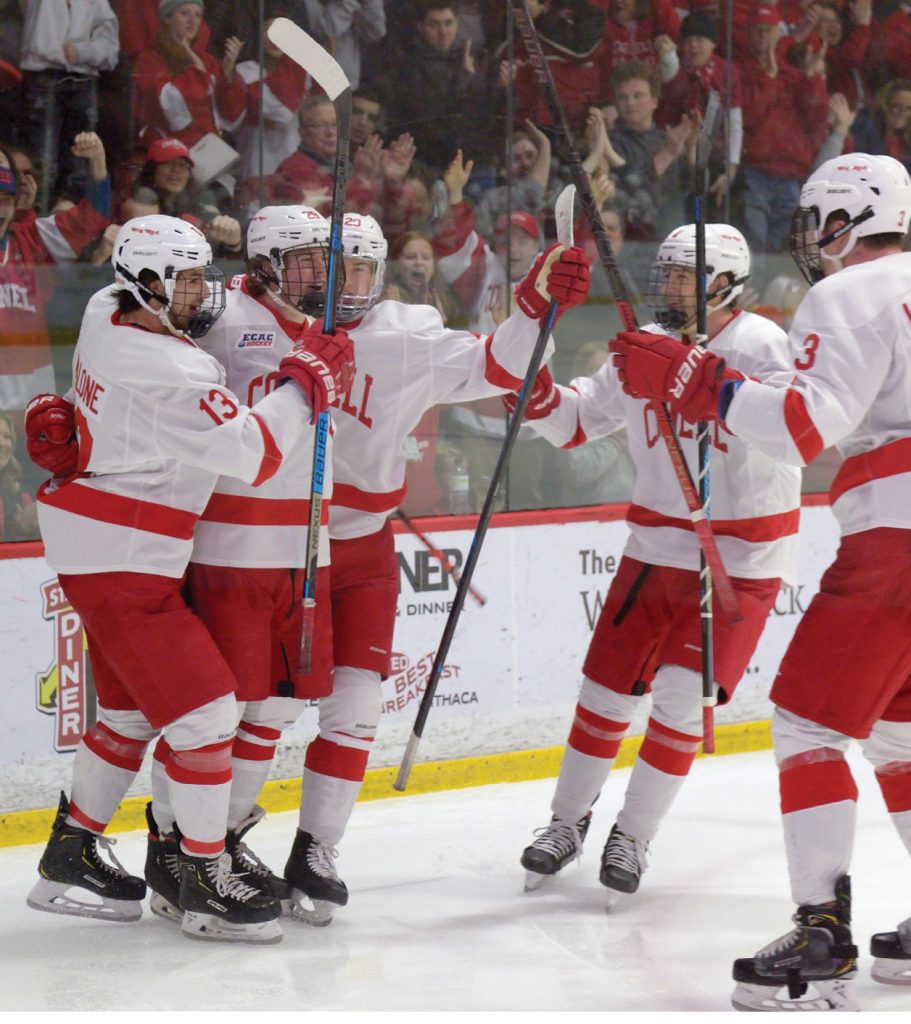 We’re number one: In the final game of the regular season, the Big Red men’s team defeated Clarkson 5-1 at Lynah.Ned Dykes