Mauna Kea is an astronomer’s paradise. The mountain, on the Big Island of Hawaii, rises to nearly 14,000 feet above sea level. Way up here, there’s minimal light pollution from man-made illumination and—since the mountaintop is above the marine inversion layer—precious little water vapor. Overseen by the University of Hawaii, this rarefied spot is home to a dozen telescopes owned and run by myriad nations and institutions including NASA, the University of California, Caltech, and the governments of Japan, Canada, and France. They search the skies using not only optical technology (detecting visible light) but instruments that study parts of the electromagnetic spectrum not perceived by the human eye, such as radio waves and infrared. “For the past twenty or thirty years, Mauna Kea has been one of the most productive observatory sites in the world,” notes astronomer Simon Radford ’79. “In terms of publications and citations, its only competitor is the space telescope—and Mauna Kea has much lower lifetime costs.”

Radford with one of the dishes.

Radford is standing near the summit, which offers a breathtaking view of an almost alien landscape: brilliant sun, gravelly red soil, oxygen-thin air, the plump tops of clouds visible down below. Patches of snow dot the Martian-esque ground; though it’s swimsuit weather down in nearby Hilo, up here it’s markedly chilly, and Radford is clad in boots, long pants, and a fleece pullover.

An applied and engineering physics alum who holds a PhD in astronomy from the University of Washington, Radford has spent the past seven years keeping two of Mauna Kea’s telescopes up and running. From 2010 until its closure in 2015, he was operations manager of Caltech’s Submillimeter Observatory; since last year, he’s been director of operations for the Submillimeter Array, which is jointly run by the Smithsonian Astrophysical Observatory and Taiwan’s Academia Sinica Institute of Astronomy and Astrophysics. (Both are separate from the proposed Thirty Meter Telescope, which has made headlines due to opposition from native Hawaiians who believe that Mauna Kea is a sacred site.)

Functioning in the submillimeter wavelength—which is between infrared and radio on the spectrum—the array consists of eight dishes; each measures six meters wide and is attached to a shed-like structure that houses its electronics. Weighing about forty-five tons each, these eight pieces can be moved into varying configurations to study anything from objects in our solar system to star formation in distant galaxies. “The eventual product of an observatory is journal papers, and you don’t get journal papers if you don’t observe things—very simple—so we try to maximize the amount of science that gets done,” Radford explains. “Because of the nature of our telescope, we observe sources generally from when they rise to when they set; we call that a track, and it takes about three and a half tracks to get a paper. So if we do 300 tracks in a year, we’ll get maybe seventy-five papers.” 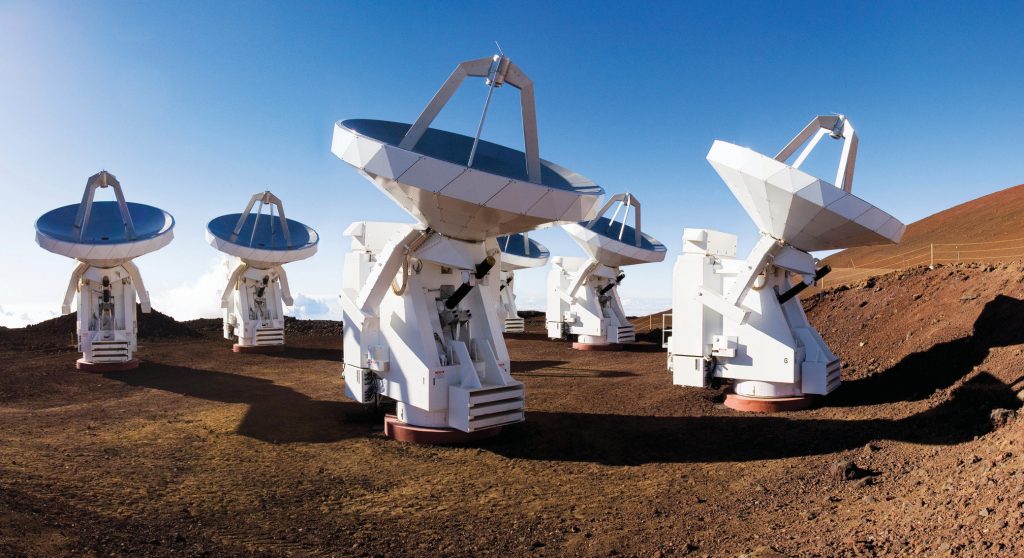 Radford, who oversees a staff of about eighteen, works mainly out of an office in Hilo, though he’s on site several times a month. The facility’s control room, which looks out onto the giant dishes dotting the red volcanic soil—again, it’s hard not to feel like you’ve stumbled into an episode of classic “Star Trek”—has oxygen piped in to alleviate altitude sickness. On one desk, in addition to the usual office supplies, sits a fingertip device that measures O2 levels in the blood.

It’s a long way from Radford’s hometown—New York City—where he grew up watching the stars projected against the ceiling of the old Hayden Planetarium. “Because the speed of light is constant, as we look out in the universe, we look farther back in time,” he muses. “So we’re essentially doing archaeology.”