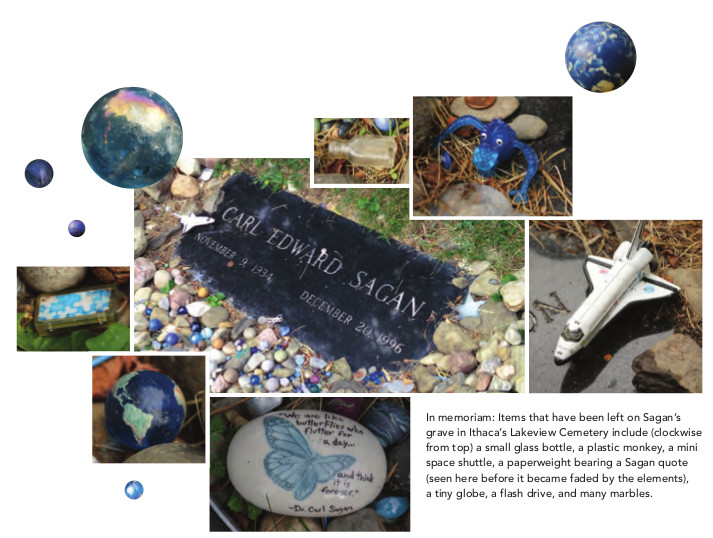 Cornell astronomer Carl Sagan was a rock star. His rock: the planet Earth. His arena: the universe. His fans: the millions of viewers he introduced to the wonders of space on the PBS series “Cosmos,” launched in 1980.

At the height of his renown Sagan was a global icon, as recognizable as Michael Jordan or the Dalai Lama. He died of cancer in 1996—but he has hardly been forgotten. His grave atop Ithaca’s Lakeview Cemetery shows that Sagan is still treasured by the many visitors to his final resting place.

What began as a reflection of Jewish tradition—the leaving of a small stone or shell at the gravesite of a loved one—has evolved into an ever-shifting display of keepsakes covering the plot. There are coins, keys, NASA collector cards, votive candles, a blue plastic monkey, a cluster of pink paper clips arranged as stars (or atoms?), a moldering copy of Isaac Asimov’s Foundation’s Edge. There’s an Altoids tin that, upon inspection, proves to be a crude bong (Sagan was an outspoken advocate of legalizing marijuana). And always, there are “pale blue dots”—dozens of marbles, polished glass pieces, and colorful plastic orbs that honor Sagan’s elegant description of Earth’s place in a vast universe.

Last spring, jewel-like clusters of glass were deposited at the corners of the headstone. Was it to mark the renaming of a Cornell institute in Sagan’s honor? Astronomy professor Lisa Kaltenegger—director of a multidisciplinary research effort on extraterrestrial life that’s now known as the Carl Sagan Institute: Pale Blue Dot and Beyond—says she can’t be sure. “But it’s a lovely idea,” she says, “and very much in the spirit of Carl.”

Sagan’s widow, Ann Druyan, also has no qualms about visitors leaving mementos on the grave, calling it “a wonderful testament to Carl’s connection with so many people around the world.” And in fact, she and their son, Sam, began the tradition themselves. “Sam was about five when Carl died,” Druyan explains. “One evening a family friend came over with some sculpting clay and we started to make little multi-colored planets. We would bring these instead of stones to Carl’s grave.”

A recent visit to the site revealed that a plastic replica of the space shuttle Columbia had arrived. A SpaceX baseball cap had vanished. And a clay paperweight bearing a Sagan quote had succumbed to atmospheric forces, its stenciled blue butterfly and the handwritten words themselves vanished into the ether. “We are like butterflies,” it had read, “who flutter for a day . . . and think it is forever.”