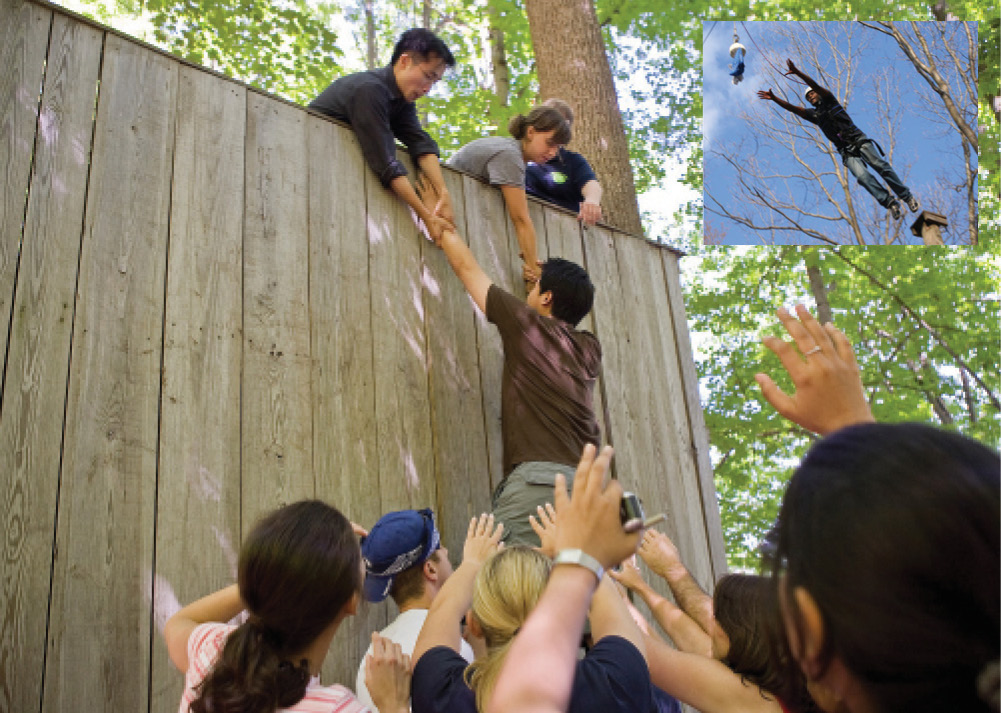 Stretch yourself: The course’s elements include a wall that participants must work together to scale, as well as (below) a balance challenge called “Quadrophenia” and (above) the “Leap of Faith.”

In a forest five miles from campus, last night’s rain drips off the leaves as strident insects buzz in the muggy morning air. Twelve newly acquainted MBA students stand in a spiral, hand-in-hand—and when their instructor gives the command, they uncoil like a whip. Hands still connected and with arms outstretched, they race the clock to reach their objective: a plush fish. Without breaking formation, they have to snag the “client” and reel him in. “It may seem silly,” admits their instructor, Matt Cowburn, “but there’s an underlying reason for everything we do out here.”

It’s a typical day during the busy summer season at the Hoffman Challenge Course, a Cornell Outdoor Education facility located in the hamlet of Varna. By integrating a variety of physical obstacles with group problem-solving exercises, the course teaches teambuilding and leadership skills to groups from on and off campus. Opened in 1997 and operated year-round, it’s one of the largest facilities of its kind in the country. It hosts more than 4,000 participants each year for hands-on training at a time when teamwork and cooperative learning are seen as increasingly vital, both in higher education and in the business world. “There’s a lot of focus around not only having theoretical knowledge, but also being able to get along with others,” notes Amy Kohut, director of the Cornell Team & Leadership Center, the COE program that oversees the course. 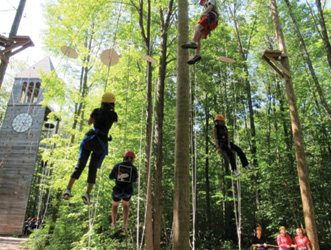 On a Monday in July, the course is hosting the Johnson School’s newest crop of executive MBA students. Today marks the beginning of a week-long orientation in which they’ll cultivate interpersonal skills while getting to know their classmates; it’s part educational exercise, part icebreaker. Since their MBA program is geared toward people who are already employed full-time, they’ll spend much of the next two years in different locations, studying virtually—which makes this first week particularly vital. And, Kohut says, navigating the Hoffman course presents an ideal bonding experience, noting that “the connections people form here are very special.”

The course includes some thirty ground-level elements—for example, a fourteen-foot wall that participants cooperate to scale using each other’s bodies—as well as high challenges suspended twenty to forty feet in the air. Underpinning the Hoffman philosophy is the integration of education with physical activity, a method known as kinesthetic learning. “When you’re physically doing something, there’s a whole-body connection to your memory,” explains Kohut. “I have people that come up to me and say, ‘Ten years ago, you were with me when I dove off of this’ or ‘I jumped off of that’—and because it was kinesthetic, they remember the experience very clearly.”

At the course’s center stands a sixty-four-foot-tall replica of McGraw Tower, outfitted with a platform and rappelling stations. Among the other high elements are a 400-foot-long double zipline, balance beams, a giant swing, a “Leap of Faith,” and a pendulum-like gizmo dubbed the “Flying Squirrel.” Instructor Erica Freeman ’15 explains that the facility’s motto, “Challenge by choice,” underscores the fact that participants
are encouraged to go outside their comfort zones—but within reason. “People understand from the beginning that there’s no pressure to do something that would make them panic,” she says. “But some people do get halfway up a ladder and realize that it just isn’t for them.”

The course sees its heaviest traffic during the summer, but there’s also a spike during the winter, with team-building events for fraternity and sorority members. With a typical program lasting four to eight hours, Freeman says, the course offers a condensed experience for groups looking to get outside without a major time commitment. “It’s more accessible to people who could benefit from spending time together outdoors but may not want to go on a lengthy backpacking or kayaking trip,” she says. Though the course mainly hosts college groups and retreats for local companies—past corporate clients include Corning Incorporated, an Upstate firm that makes advanced materials—it’s also open to alumni during Reunion and to students seeking an alternative to boozy Slope Day activities. At such times, the focus becomes more recreational—but, Kohut says, “we always weave in ‘What did you learn about yourself and whom did you meet?’ ”

After each challenge, the instructors conduct a short debriefing in which participants are asked to ponder how they can apply their experiences to real-world situations—an element that Cowburn calls essential. “You have to make it meaningful,” he says. “When people are outside dealing with the weather and the bugs, they need to see the meaning in what they’re doing.” His point is underscored when the Johnson students tackle the “Spider Web,” an element in which two teams, representing opposing companies, collaborate to pass their members through a network of ropes without touching it. The obstacle, suspended between two trees, is roughly six feet high; the aspiring MBAs have to maneuver twelve differently shaped and sized classmates through its varied gaps. After some tactical planning and a lot of heavy lifting, the teams complete the challenge, then gather to discuss what they’ve learned. They touch on the meaning of leadership and the advantages of adaptability, but focus on strategic communication—which they agree is essential to success, both on the course and in the boardroom. “If you can’t work well together, you can’t work at all,” Kohut says, summing up the take-away. “If you have the greatest idea in the world but you can’t get somebody to understand it, it’s not a good idea.”