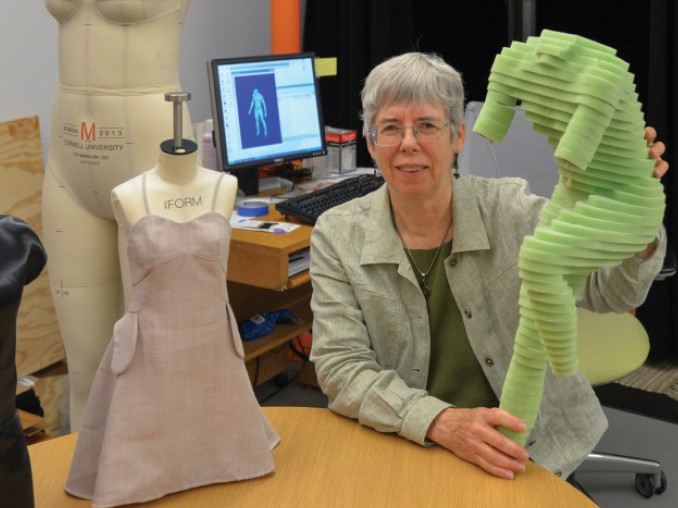 Perfect fit: Professor Susan Ashdown, MS ’89, in the lab with models of the human form.

There’s a long, high-pitched chirp, and eight cameras glide down four metal poles fixed to the corners of a raised platform. You hold perfectly still, maintaining a solemn face. Twelve seconds later, your image appears on a computer screen.

Your likeness has just been captured by Cornell’s body scanner. The $100,000 piece of technology, housed on the second floor of the Human Ecology building, gathers approximately 300,000 data points to create a three-dimensional image of the human form. With a few keystrokes, you can navigate around your avatar, moving the mouse to see yourself from the perspective of someone shorter or taller. Professor Susan Ashdown, MS ’89, who leads the Cornell Body Scan Research Group, explains that it’s not uncommon to be unnerved by the experience. “You never see yourself as the sculptor does, in three dimensions; even in a mirror, it’s two-D,” she says. 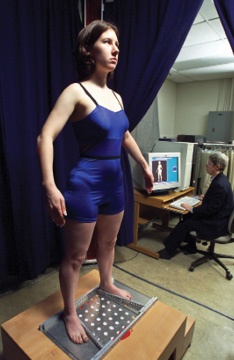 Ashdown, who has been working with body scanners since 2000, focuses her research on making clothing fit better. As she explains, bodies differ far more than most people realize. “We think ‘tall basketball player’ or ‘short jockey’ or ‘muscular person,’ ” Ashdown says, “but we don’t really pay attention to the different proportions.” She notes that ready-to-wear clothing—garments mass-produced for store shelves—is intended to fit most customers passably, and therefore only fits a small minority well.

To understand the design challenges posed by different body types, Ashdown and her research team are amassing a database comprising scans of volunteer models, many of them Cornell students. (She’s not quite sure of the tally, but says they have “files and files of people.”) The process involves scanning each person twice, then merging the two images. Each model is first scanned in minimal clothing, such as undergarments, and then fully clothed—carefully holding the same pose for both. The combined image tells Ashdown how much space there is between the clothing and the body—how well the garment fits.

Creating more customized clothing is somewhat of a return to tradition, Ashdown explains. In the centuries before ready-to-wear reigned, consumers purchased material and enlisted tailors and dressmakers to design custom clothes. As body scanning becomes more accessible and ubiquitous, she says, the concept is re-emerging. Ultimately, shoppers could upload their scans and have garments made that perfectly match their proportions. “It wouldn’t be true custom,” Ashdown says. “But if there were patterns to fit every imaginable shape, size, and proportion, it would just be a matter of matching your body to a pattern.” Already, rudimentary versions of the scanners can be found in malls, helping shoppers ascertain their true sizes and directing them to stores that may stock clothes that suit them.

Ashdown’s research projects comprise a wide variety of topics. She has studied the relationship between the fit of jeans and body satisfaction, and worked with Nike on establishing a better sizing system for athletic apparel. To explore one of the most notoriously hard-to-fit garments—brassieres—she used pressure sensors as well as scans and queried subjects on their feelings about their own bras. She has collaborated with NASA to update its spacesuits to accommodate a wider variety of body types, and is currently working on a project to make active wear, such as bike shorts, better fitting and more comfortable. Another ongoing effort aims to improve firefighters’ uniforms; working with a local station, the lab scanned firefighters in their gear. Models even posed in action shots—using a hose or wearing a breathing tank—so the researchers can take range of motion into account. Still another project aims to streamline the design process overall by creating half-sized mannequins for use as dress forms. “It’s more economical and practical to make patterns on a half-scale,” says undergraduate researcher Jackie Wu ’17, a fashion and apparel design major from Boston who’s collaborating on the effort. “You can figure things out without wasting fabric, and you can manipulate the pattern more easily because it’s smaller.” Last summer, the team gave the half-size forms a test run by sending a dozen to a Syracuse summer camp for teenagers interested in fashion.

Over the course of her work, Ashdown has been scanned dozens of times. Her proportions have been used to design a jacket, which she hails as the best-fitting garment she owns. Has her work influenced her shopping habits? “I sought out custom clothing sooner than I would have otherwise,” Ashdown admits. “I became more and more uncomfortable in clothes that didn’t fit.”