At eleven on a Tuesday night, a set of storefront windows on College Avenue reveals an unexpected scene amid the neighborhood’s bars and eateries: nearly 1,000 square feet of open work space, packed with students hunched over 3-D printers or scribbling on whiteboards.

It’s called PopShop—and with its collection of high-tech equipment and scavenged furniture, the brightly lit space looks like a cross between a laboratory and a yard sale. Projects ranging from smartphone apps to an electric keg-cooler keep PopShop abuzz at all hours of the night, often attracting stares from students trudging home from the libraries or the Pixel Lounge dance floor. “Starting your own business can be a lonely process,” says co-founder Ali Hamed ’14. “We’ve dealt with that problem by creating a space where like-minded people can have fun and learn from each other.” 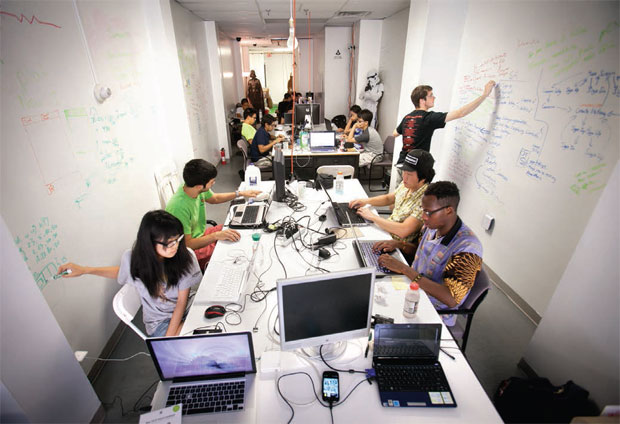 Inspired by General Assembly and We Work—co-working spaces popular in large cities across America—PopShop’s eight undergraduate founders sought to create a highly visible venue for students to explore their entrepreneurial interests. Since its original location opened for a month-long trial in a small studio on Dryden Road in April 2012, it has attracted more than a hundred undergrads and grad students in disciplines from architecture to electrical engineering. “We had $1,000 to pilot the space—for rent, light bulbs, toilet paper, you name it,” says cofounder Morgan Beller ’13. “It wasn’t palatial, but it had the character and essence that PopShop embodies.” With the help of a handful of faculty and alumni, it moved to its current location on College Avenue in May 2013. “The entrepreneurship community existed, but it was dispersed across campus,” says Beller. “We created a centralized hub where all students, regardless of year or major, could come to discuss their endeavors.”

Now in its second year, the storefront attracts newcomers and keeps regulars coming back with classes called PopShopU, offering instruction in such topics as Photoshop and iOS programming. It also hosts networking events like “start-up speed-dating,” which matches entrepreneurs with potential talent. That’s how information science major Nicole Calace ’16 started working on the interactive design for a grocery shopping app created by MBA student Nick Nickitas. Engineer Ricky Panzer ’13, BS ’14, had already started Splat (short for Smartphone Powered Laser Tag) when he came to the shop looking for more manpower; the company, now based in Menlo Park, California, makes hardware and software that turns a phone into a Bluetooth-enabled tag gizmo. Recent alumni who have launched their own entrepreneurial careers have returned to PopShop to host workshops on topics like Google Glass or to judge hackathons—collaborative computer programming competitions that can go on for more than twenty-four hours. “My favorite part of PopShop isn’t a physical attribute but the atmosphere,” says Calace. “If you’re working on something and you need help, all you have to do is look up from your computer and ask for it. That’s the difference between co-working spaces and a library: here, everyone is a resource.”