Hydrilla is, perhaps, the perfect plant for freshwater aquariums. Its miniature, saw-toothed leaves form circular whorls emerging from slender, bright green stems, setting a naturalistic scene behind glass. Known as water thyme and adorned with delicate, white flowers, the herbaceous perennial thrives in low light, tolerates a broad range of temperatures and nutrient levels, and grows quickly. In its native environs throughout Asia, strands of Hydrilla verticillata extend twenty-five to thirty feet long. There, the submerged plant hangs in a delicate ecological balance with native fish, insects, and pathogens that hold its vigorous nature in check. 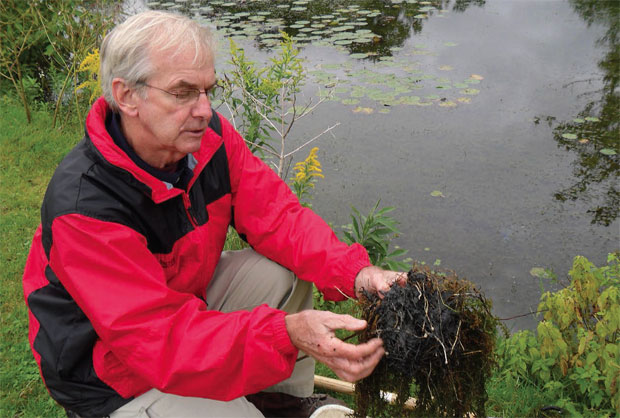 But what captivated an exotic fish importer in 1950 has made hydrilla a nightmare in the United States for nearly sixty-five years—ever since the contents of an aquarium were dumped into a Florida canal. Once loosed, it’s nearly impossible to eradicate, forming dense mats that choke shallow waters, outcompete native species, fuel toxic blue-algae blooms, and clog the intakes of power plants and water treatment facilities. Added to the Federal Noxious Weed registry in 1979, it’s now endemic throughout the Southeast and found in isolated pockets as far north as Maine and all the way to the Pacific coast. Hydrilla boasts established populations on every continent but Antarctica.

As of August 2011, those beleaguered communities officially include Ithaca. That month, a high school student sampling aquatic plants tossed the working end of a farm rake into the waters of the Cayuga Inlet. When she drew it back, hydrilla clung to the tines. Retired Cornell Research Ponds manager Bob Johnson ’65 confirmed its identity and, within days, the Hydrilla Task Force of the Cayuga Lake Watershed—a broad coalition of state, local, and federal officials and nonprofit environmental groups—had formed to pursue a singular goal: to eradicate the invader within five years. “If we let hydrilla go, it will have a huge impact on how people use the south end of the lake,” says Johnson. “We could end up singing ‘Far above Cayuga’s swamp.’”

Hydrilla propagates easily and spreads fast—in propellers and on boat trailers, stowed away on waterfowl, and in the water itself, driven by wind and waves. The Inlet feeds into Cayuga, which connects to the other ten Finger Lakes, providing a gateway to the extensive Erie Canal system and ultimately the Great Lakes. In addition to their combined $600 million recreational boating industry, the interconnected waterways are integral to a robust shipping industry as well as local power plants and water treatment facilities.

‘If we let hydrilla go, it will have a huge impact on how people use the south end of the lake. We could end up singing “Far above Cayuga’s swamp.”‘In the first year of a comprehensive survey, Johnson found hydrilla mats comprising nearly eight acres near the Ithaca Farmers’ Market, at Cass Park, and along the Cornell crew’s practice route. His studies suggested that it had likely been introduced two years earlier, and interviews with Big Red coaches confirmed the hypothesis. “The dense mats made it hard for the chase boats to follow along,” recalls director of rowing Todd Kennett, who noticed the growths in August 2009. “We knew where they were and avoided them.”

Despite six decades of dedicated study in the Southeast, scientists have yet to find an effective bio-control to mimic the ecological balance furnished by hydrilla’s natural enemies in Asia. So like communities in Florida and Louisiana, the Cayuga Lake task force has relied on a suite of herbicides. So far, the combined tab for local monitoring and chemicals is $700,000. That’s chump change compared to the $15 million to $20 million spent annually in the Sunshine State to keep the invader in check. “Here, we’ve got 20,000-acre lakes that are 90 percent covered in hydrilla,” says agronomist Bill Haller ’69, acting director of the University of Florida’s Center for Aquatic and Invasive Plants. “Our economic surveys have shown that with a 50 percent infestation, 75 percent of people stop using the lake for fishing, sailing, boating, swimming, and other recreational uses.”

On Cayuga, Johnson’s surveys—paired with a citizen science group known as the Hydrilla Hunters and volunteers from the nonprofit Floating Classroom—show that the team is making headway. Last year, new infestations were discovered at the southern end of the lake, in water features at the Ithaca Golf Course, and in Fall Creek, but populations of the overwintering tubers that transform seasonal top growth into a perennial infestation seem to be falling dramatically. “We don’t know exactly how this plant will behave in a large, open body of water like Cayuga in our bioregion,” says Bill Foster ’87, Floating Classroom’s program director. “The risks, however, are extreme. If hydrilla succeeds in becoming established and behaves as it has elsewhere, lake-based recreation will be curtailed or radically altered.”