Beneath a high ceiling on the ground floor of an iconic building in the California seaside town of Pacific Grove, local art decorates the walls and global fusion dominates the tables. At Jeninni Kitchen + Wine Bar, it’s a revelation for the taste buds each time a server returns with a small tapas plate – from chicharrones (pork rinds) and eggplant fries to rabbit-and-bacon sausage and goat’s milk flan. 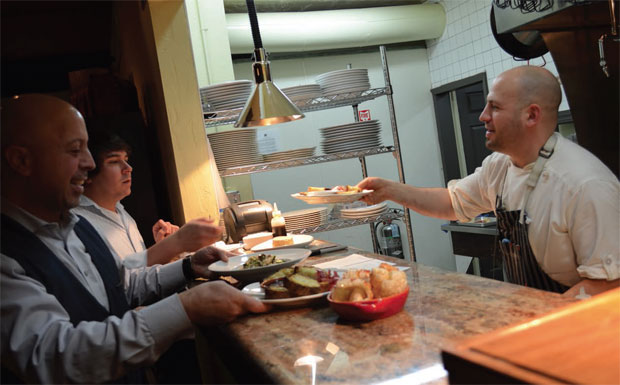 Chef Jeffrey Weiss ’10 uses the catchall “southern Mediterranean” to describe his cuisine, because nothing more specific can capture its variety of flavors – a mélange of Middle Eastern, Moroccan, Andalusian, Turkish, Tunisian, and more. The menu at Jeninni – located three blocks off Monterey Bay in a former department store that John Steinbeck made famous in Cannery Row – even includes a glossary of culinary terms. Urfa? It’s a smoky Turkish pepper. Boquerones are pickled white anchovies. Butifarra is a Catalán sausage, ras el hanout a North African spice, dukkah an Egyptian herb. No wonder the local weekly paper described Weiss’s cuisine as “an invigorating education for your palate.”

In the partially open kitchen, the thirty-seven-year-old chef oversees the eclectic menu, which reflects the unusual route he took from his native California and back again. Most notable is the charcuterie, offerings that include chicken liver pâté, country pork terrine, and a ham of the month. The featured meat (in May, a peanut-fed Berkshire from Virginia’s Surry Farms) is displayed atop the second-floor bar like edible art. Nearby is the book – Charcutería: The Soul of Spain – that Weiss published in March. At 464 pages, it weighs more than the ham.

Weiss owes his passion for charcuterie to James Beard Award-winning chef José Andrés, the Picasso of tapas in America. Thanks to a recommendation from Andrés, Weiss landed a prestigious culinary scholarship from the Spanish Trade Commission, which allowed him to immerse himself in the nation’s language and culture while apprenticing in the kitchens of some of its most renowned chefs. He also spent time in Spain’s Extremadura region, becoming expert in the art of charcuterie – using the preservation process to draw out the flavor of meats.

Although charcutier is a French word that roughly translates as “pork butcher,” it isn’t reserved for porcine products and is by no means just a Gallic talent. But when Weiss went to work at a gastropub in Greenwich Village after returning from Europe, he discovered that even some of Manhattan’s top chefs were largely un-schooled in the Spanish version of the technique. “Most of the information was verbally handed down within families and regions,” he says. “It was never written into some sort of compendium. There was no collection of this knowledge anywhere.”

So Weiss wrote the book on it. More than simply a cookbook, Charcutería is a hardcover epic that combines photographs, illustrations, anecdotes, and recipes to tell historical, cultural, and gastronomical tales about Spain’s meat-curing traditions. As a review in the Austin Chronicle put it: “Until this book, no one has ever detailed in the English language the butcher’s traditions of Spain or the art of the matanza (the ritual pig slaughter), and Weiss has done it in a detailed fashion that immediately gets your mouth watering.”

Weiss’s culinary commitment is also evident in the way he tutors his young chefs. When they’re prepping vegetables and he tells them (from some distance away), “I can hear you cutting it wrong,” he’s channeling his own gastronomic guru. While in high school outside San Francisco, he found part-time work at the Silicon Valley’s upscale Lion & Compass restaurant. Its chef became his mentor, using every task – from washing dishes to slicing onions – as a teachable moment. When Weiss excitedly showed him his acceptance letter to Cornell, he replied, “That’s awesome. Congratulations. You’re not ready,” and convinced him to defer for a semester.

Weiss had already gotten a late start in college due to an entirely different pursuit: competitive pairs figure skating. The sport took him around the world, earning him a silver medal at the 1995 U.S. junior championships and a sixth-place finish at the seniors event in 2000. But Weiss says that it wasn’t so much the global travel that informed his cooking career as what skating taught him about the need for basic skills. Even as a young boy, he’d wake up before dawn to trudge to a dimly lit rink and commit to the drudgery of practicing school figures, tracing the same prescribed patterns in the ice over and over. Having traded in his blades for cutlery by age twenty-four – he notes that “the Mickey Mouse on Ice show is a future I didn’t want” – Weiss now pairs with Jeninni Kitchen owner Thamin Saleh, adding more global fusion to his résumé. “He’s Palestinian; I’m a Jew. But he drinks wine and I do pork,” Weiss says with a laugh. “I think we can solve world peace through this restaurant. Why not?”