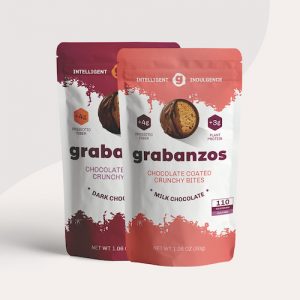 The Cornellian minds behind Grabanzos want to make one thing crystal clear: they’re not chocolate-covered chickpeas.

Born in a food science class in CALS, the novel product does involve those hearty legumes, also known as garbanzo beans—but by the time the tasty snack gets to your mouth, they’re all but unrecognizable. Sold online and in a growing number of stores, Grabanzos are treats akin to chocolate-covered pretzels, or perhaps malted milk balls without the malt (and most of the sugar): crunchy, a bit savory, and lightly sweet. “Some of our marketing is like, ‘You’ll never guess what they’re made of,’ ” says Jason Goodman, a doctoral candidate in food science and the company’s CEO. “We try not to even talk much about the fact that they’re made out of chickpeas, because our product is so different from a chickpea it’s creating confusion. Imagine if a cookie was not a thing and someone asked, ‘Do you want to try this wheat-based confection?’ We don’t even say it’s a chickpea snack. It’s a chocolate-coated crunchy snack.” 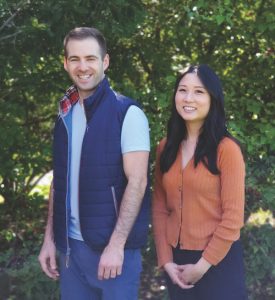 Through a proprietary process the company has been perfecting over the past several years—with help from food science faculty, CALS testing facilities, two local start-up incubators, and a grant from the National Science Foundation—the ingredients are made into a dough, formed into nuggets, baked until crispy, and enrobed in either dark or milk chocolate. And because chickpeas are the primary ingredient, the resulting treat is relatively guilt-free, by candy standards: a one-ounce serving of about ten Grabanzos (each roughly the size of a Milk Dud) has 110 calories, plus three grams of plant-based protein and four grams of dietary fiber. Both flavors are gluten free, and the dark chocolate version is vegan. “If you look at other crunchy snacks that use wheat, rice, potatoes, or corn, there’s no fiber in them, and fiber is good for gut health,” says Goodman. “If you want to eat chocolate, we make it a little easier, because you’re also getting functional benefits. It’s OK to indulge.”

Grabanzos are made at a facility in the Hudson Valley, but they trace their genesis to a product development class on the Hill in winter 2017, when Goodman, Yoon, and their fellow students were tasked with creating a healthier version of an existing food. Goodman and his team opted to pursue a chickpea-based chocolate confection, which turned out to be popular with friends and classmates. Yoon, who’d been on a different team, later joined him (and two other Cornellians who are no longer directly involved) in founding Grabanzos’ parent company, Antithesis Foods, the following summer. “It’s a fantastic product—people really love it,” says Olga Padilla-Zakour, PhD ’91, a professor of food science and director of the Cornell Food Venture Center. “It’s got great nutritional composition, but also flavor and texture. It’s a really well-done product from a food science point of view and in terms of what consumers want—a very healthy snack that is plant based and has rich flavor, low calories, fiber, and good protein.”

For Antithesis, an early milestone was being accepted into eLab, Cornell’s student business accelerator, which helped the company develop a business plan and explore its potential market. It got further help and mentorship through Rev: Ithaca Startup Works, a community-based incubator that’s a partnership among Cornell, Ithaca College, and Tompkins Cortland Community College. The company has done R&D at the Food Venture Center (located in Geneva), and CALS has provided practical assistance like helping find a warehouse to store 10,000 pounds of chickpeas. “It’s been great to have this wonderful system of support,” says Yoon. “We definitely could not have done any of this without it.”

In 2019, Antithesis won a $225,000 small business innovation grant from the NSF, which has allowed the company to do research on how best to scale up production and to explore what other items—from chips to cereal—could be made from the chickpea dough. “We have our process established for Grabanzos, but we need to improve it and make the dough dry a lot faster,” says Yoon, explaining that large quantities of water are key to production, but then must be removed. “It’s also taking that dough and making it into an entire ingredient platform—not only forming it into different shapes, but taking those shapes and drying them quickly, in a way that makes sense to scale up and is cheaper to produce.”

This fall, Antithesis plans to introduce a third variety of Grabanzos: ruby chocolate, enrobed in a pinkish confection that has recently emerged as a trendy alternative to milk, dark, and white; Yoon describes its flavor as “fruity, acidic, and tangy.” In addition to being on the shelves in a smattering of stores (including Ithaca’s Wegmans)—mainly in New York but in several other states including California and New Jersey—Grabanzos are sold online, with single-serving bags priced around $3.

On the Grabanzos website, customers can also purchase a $5 sample pack. As Goodman and Yoon explain, it’s a way to get consumers to try them—a challenge in the COVID era, when stores aren’t allowing brands to hand out samples. The pandemic has also put a crimp in their retail expansion plans: as has been widely covered in the media, it’s a challenging time to get consumers to embrace new products. Given the current stresses, Americans have been flocking to familiar brands and comfort foods, leading to temporary shortages of standards like pasta and canned soup. “We’re trying to add more stores,” says Goodman, “but the COVID period has made it really tough.”

On the upside, the pandemic has boosted online orders—which Goodman and Yoon still pack and ship themselves. (They plan to continue doing so even when they begin selling on Amazon this fall, given the online retailer’s restrictions on products that melt in warm temperatures.) They’re also involved in a project, based in nearby Schuyler County, to study whether chickpeas can be grown successfully in New York State; an initial crop was planted for harvest this fall. Partners in the venture include the University, Ithaca Hummus—another Cornellian-owned company—and Cornell Cooperative Extension. Antithesis is also developing a new product: a healthier version of a stroop­wafel, a dessert comprising a layer of caramel sandwiched between two waffle-type cookies made from the company’s chickpea dough. “Seeing your students being successful in their own companies is one of the most rewarding experiences you can have as a faculty member; it puts a smile on your face and makes you beam with pride,” observes Padilla-Zakour. “Grabanzos is a good example of that. It started out small, and they saw the future it could have.”