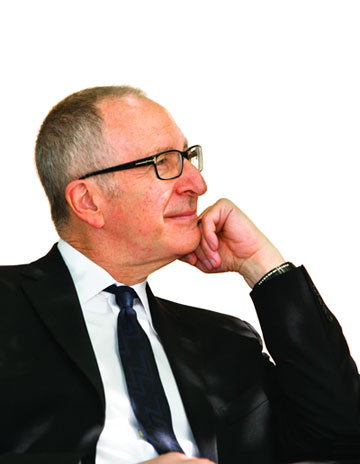 “Colleges are delicate organisms,” President David Skorton wrote in an essay in U.S. News & World Report last fall, “that require careful handling when they must be handled at all.” It’s an apt sentiment from a university president who’s also a medical doctor: as a physician, Skorton knows a thing or two about paying careful attention to symptoms, offering measured treatment, and doing no harm.

Since he took office in July 2006, Skorton has been a popular and moderate chief executive—a stabilizing force who led the University during some tough times but was never shy (or stuffy) about enjoying the lighter moments. During his tenure, the Ithaca campus saw a building boom that included new facilities for computing (Gates Hall), architecture (Milstein), life sciences (Weill), and humanities (Klarman, currently under construction). Skorton presided over the first Commencement ceremony at Cornell’s medical school in Qatar, and oversaw the University’s successful bid for a graduate technical campus in New York City.

On a day to day level, though, Skorton’s presidency was distinguished in large part by his willingness—in fact, his eagerness—to roll up his sleeves and mix with undergraduates. He shared his e-mail address far and wide and invited students to Day Hall for office hours. As he wrote in a recent column for CAM: “No source of information about the student experience is more meaningful than the students themselves.” Those CAM pieces, which ran in each issue throughout his presidency, were just one of the ways in which he communicated with a wider audience; his byline regularly appeared in national publications, and he served in numerous state and national organizations related to medicine, higher education, and the economy. 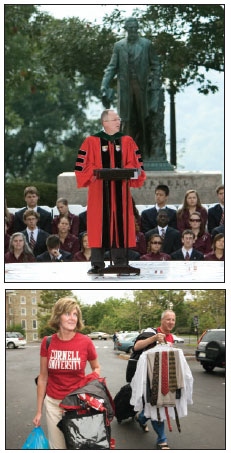 A respected cardiologist, Skorton held appointments in medicine and pediatrics at Weill Cornell and in Ithaca’s Department of Biomedical Engineering. Although he’s loath to claim the credit, he was widely admired for fostering closer relations between the Medical College and the Ithaca campus—a divide that, in the past, had sometimes seemed greater than the 200 or so miles separating them. He has also been a passionate advocate for the humanities, extolling their value not only for higher education but for society at large. As he once wrote in the Huffington Post, humanities study “is indispensable if we are to grasp where we come from, and why, in order to lead us into the future.”

While Skorton didn’t face campus crises as dramatic as did some of his predecessors—like James Perkins, who was president during the 1969 Straight Takeover and resigned shortly thereafter—he did guide Cornell through the worst economic downturn since the Depression. And in perhaps the gravest moment of his presidency, he coped with a suicide outbreak that shook campus in the spring of 2010, taking decisive (though not universally popular) action to fence off the gorges.

Despite his weighty day job, there was room for fun. Skorton jammed with jazz great Wynton Marsalis, crowd-surfed with the Pep Band, got soaked for the “Ice Bucket Challenge,” and gamely appeared in a dairy-promotion ad wearing a milk moustache. And he was indefatigably willing to pose with selfie-snappers—on campus, at Reunion, and beyond. If you’re skeptical, just google “David Skorton selfie.” Sometimes, he’s even the one holding the camera.

‘As a research university, Cornell’s first and perhaps most critical role is to nurture the talent needed to imagine, discover, and create.’ 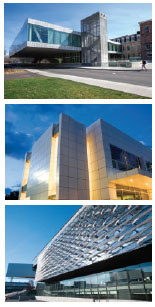 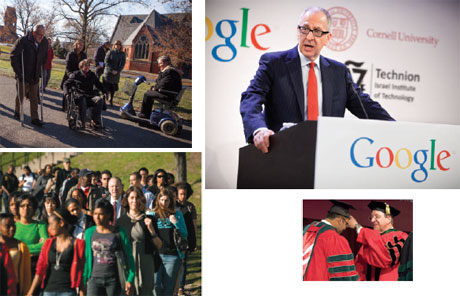 Sure-footed (clockwise from top left): Participating in an exercise about disabilities on campus; speaking at a Cornell Tech press conference; conferring a degree at the first Medical college commencement in Qatar; and marching to mark the fortieth anniversary of the Straight Takeover 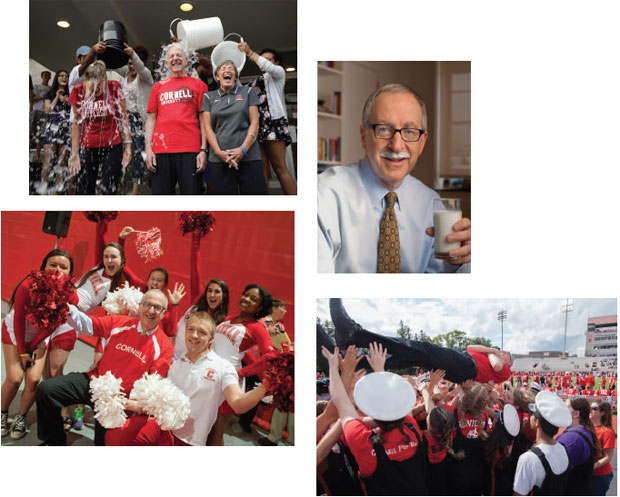 ‘A great university, like a great nation, is never finished.’ 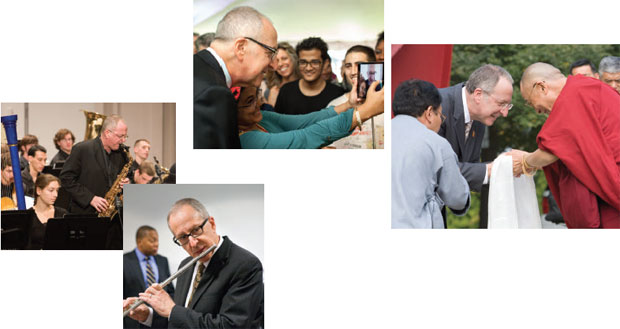 Photos (left to right): France, Barker, UP, UP

Art and soul (clockwise from right): Taking a selfie with students; meeting the Dalai Lama; performing with Wynton Marsalis; and jamming with the Jazz Ensemble