Uncorked: Cheryl Stanley ’00 lectures on the merits of Bordeaux.

“Mother Nature gives the region of Bordeaux a different year every year,” says Hotel school lecturer Cheryl Stanley ’00. “We don’t talk much about vintage variation when we get into the new world, like Napa Valley, but we see this a lot in the regions of both Bordeaux and Burgundy.”

Stanley is speaking to an audience—a big audience. It’s a Wednesday afternoon in March, and she’s onstage in front of the 700 or so students packing Statler Auditorium for one of the University’s most popular courses: Introduction to Wines. As teaching assistants clad in white lab coats circulate among the rows distributing bottles—each capped with a dispenser that portions out a one-ounce pour—Stanley and her guest speaker, Bordeaux vintner Basile Tesseron, discuss his home region. Their topics range from decoding wine labels to the influence of the region’s gravelly soil to the distinctions between the Left Bank (bastion of Cabernet Sauvignon) and the Right (dominated by Merlot). “So often consumers associate the region of Bordeaux with expensive wines,” Stanley observes. “Let me tell you, there are amazing bargains—everyday drinking, value wines—that come from Bordeaux.” In addition to imparting veritable casks of information, their tag-team presentation often has the audience in stitches. “To make a good wine, you need to be a good drinker,” the nattily clad, suavely accented Tesseron offers at one point. “A good bottle of wine is an empty one. If you don’t like to drink, don’t make wine.” 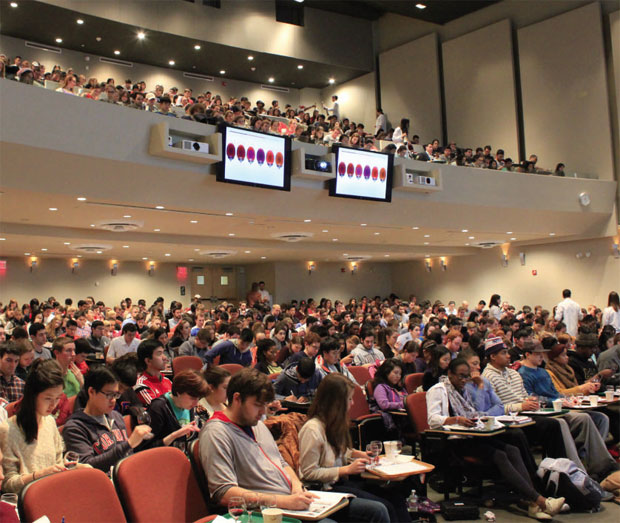 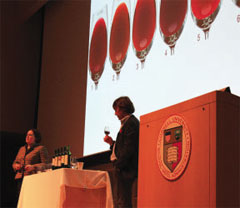 For many Cornell seniors—at least, those lucky enough to get into the class—this is a spring semester rite of passage. Every Wednesday afternoon, students toting the regulation tasting kit of three glasses in a small black case are a familiar sight around Central Campus. “When you start learning about wine, you start seeing how unique it can be,” says current student Quinn Cox ’15. “You could taste two wines from the same grape varietal that were grown on vines fifteen feet from each other and they can taste completely different. That blows my mind.”

This is Stanley’s second year teaching the Wines class, and her first doing it solo. In 2013–14, she co-taught it with the man whose name was synonymous with the course for three decades: Professor Stephen Mutkoski ’67, PhD ’76. It was a passing of the torch similar to when Mutkoski took over from his predecessor, Vance Christian ’61, MS ’65. “Steve was Vance’s TA, and I was Steve’s TA,” Stanley says, chatting in her Statler Hall office a couple of days after the Bordeaux class. “We keep it in the family.” Speaking of being a Wines TA: it’s nothing like serving as a typical teaching assistant, called upon to grade homework and run section meetings. “It’s mostly just being a waitress,” current TA Alex Faulkner ’15 says with a laugh. “I’ve gotten pretty quick at opening wine bottles.” Numbering about two dozen per semester, the TAs are responsible for distributing the six wines—sometimes seven—tasted in each class. “When you’re dealing with hundreds of bottles of wine, being organized is the most important thing,” says Faulkner. “Since the students have three glasses, as soon as they finish with the first wine, we bring out the fourth, so there’s essentially always a wine in all three glasses. The timing has gotten super good, in terms of doing that effectively with the least interruption.” 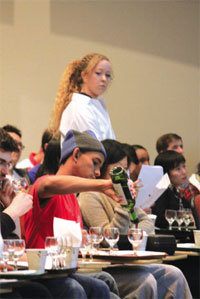 At the Bordeaux class, the first wine tasted is a 2013 white from Château Bonnet, a blend of Sauvignon Blanc and Sémillon (plus some Muscadelle) that retails for about $12 a bottle. “Sauvignon Blancs in cool climates tend to be very grassy and herbaceous,” Stanley says, “so let’s smell this wine and see what we’re getting in the glass.” She asks the students to call out the aromas they encounter: bell pepper, honey, grapefruit, turkey. Then it’s time to taste. “They’re a perfect complement to each other,” Stanley says. “The Sauvignon Blanc has that lean, crisp acidity, and then the Sémillon rounds it out.” She asks the class to ponder the wine’s body and its finish, noting, “The Sémillon is kind of hanging around in my mouth.” Stanley’s tasting style is accessible and unpretentious, as when she declares the white, “what my friend calls a ‘porch pounder’—you can sit on your porch and enjoy it.”

‘We have wines aging in our cellars that are from the birth years of students who are coming down the pipeline.’Stanley didn’t grow up in a household of wine aficionados. Her dad favored beer—“He had many dogs, and each dog had a different beer name”—and her mom never much cared about wine until somewhat later in life, when she had what Stanley calls a life-changing glass of Sauternes while traveling on Air France. “It was my grandmother who introduced me to wine,” Stanley says. “She always drank Louis Jadot Pouilly-Fuissé—until she turned ninety, when she switched to Crown Royal on the rocks.” After graduating from the Hotel school, Stanley worked at the Four Seasons in Newport Beach, California, and soon found herself in charge of the entire beverage operation, including a wine list the length of a novella. She went on to gain sommelier certifications from three different governing bodies, earn a master’s in hospitality management from Texas Tech, and teach as an adjunct at the Culinary Institute of America (CIA) before returning to the Hill in the fall of 2013.

These days, wines and spirits are a family affair: Stanley commutes to Ithaca from the Poughkeepsie area, where her husband teaches courses on beers, spirits, and mixology at the CIA. (Their honeymoon, appropriately enough, included stops in Oporto and Champagne.) In addition to the Wines class, she also teaches courses in beverage management and catering, and helps oversee acquisitions for the Hotel school’s cellar. “When Steve taught the course—and this is something I want to do as well—he didn’t just think about the semester or even the next five semesters. He thought long-term,” Stanley says. “We have wines aging in our cellars that are from the birth years of students who are coming down the pipeline.”

While the Wines course is famously popular among graduating seniors in their final semester, Stanley aims to spread the word about a little-known fact: it’s also offered in the fall, when there are empty seats. And she wants to debunk the popular misconception that non-Hotelies need to be twenty-one to take the class; the only requirements, she says, are that students be juniors or seniors and at least eighteen. “We’re trying to have a marketing campaign on social media to encourage students to take the class in the fall semester,” she says. “There are so many rumors around campus about the Wines class, and so much misinformation.”

Back in Statler Auditorium, the Bordeaux lecture is winding up. After six tastings—the white is followed by five reds, including one from Tesseron’s own Château Lafon-Rochet—Stanley ends with a seventh, a 2008 Sauternes from Château Laribotte. As the students taste, she describes the Botrytis cinerea fungus—also known as “noble rot”—that’s key to the winemaking process. “Look at the berries in the upper right-hand corner,” Stanley says, indicating the moldy fruit in a PowerPoint image. “That’s what you’re drinking. And let me tell you, it is liquid gold.”