Steps forward: Mark Kirk ’81 in rehab after his stroke

In January 2012, a year after he was sworn in to fill the U.S. Senate seat once held by Barack Obama, Mark Kirk ’81 was in his Illinois home when he felt dizzy and his left arm grew numb. Kirk, then fifty-two, managed to drive himself to the hospital, where he suffered a debilitating ischemic stroke. His political career appeared to be over. But after two operations to relieve brain swelling and a year of grueling rehabilitation, Kirk made a dramatic return to duty. Despite lingering effects from the stroke, he told a reporter last November there is “no frickin’ way I am retiring” when his six-year term expires next year. Kirk, who previously served five terms in Congress, is the only Cornellian in the Senate and one of just a handful ever to serve there. He recently sat down with CAM for a chat in the Hart Senate Office Building.

Cornell Alumni Magazine: How complete is your recovery?
Mark Kirk: Pretty complete. I had to relearn how to walk, how to read. The key to recovery is to treat what your physical therapist says like the revealed word of God. Just follow his direction, and you are going to get better. I was flat on my back, and now I’m definitely not flat on my back.

CAM: Are you still doing rehab on your left side?
MK: Very much so. It’s a process that will probably continue for the rest of my life. There’s a lot of walking and loosening up stuff to make sure you are ready to go each day.

CAM: What’s your advice for other stroke victims?
MK: My most rewarding work has been to tell them that their best days are ahead. A lot of times they will say to me that they remember when I climbed the forty-two steps from the parking lot to the Senate front door. The entire Senate was out there cheering me on. It was a good, happy, bipartisan moment in a place that doesn’t have too many of those.

CAM: How has the experience changed your outlook?
MK: I used to be a glass-half-empty guy, a pessimist. Now I’m much more of an optimist, and much more empathetic. People all have their own stairs to climb.

CAM: Is there a public-policy piece of this? Tell us about the legislation you’ve introduced.
MK: I’m an advocate for something I’ve written called “the stroke agenda.” About 700,000 Americans each year suffer strokes. Three-quarters will never return to work the way I’ve been able to. I want to set a national goal to get as many of those folks as possible to return to work.

CAM: Looking back 35 years, you attended Blackburn College in Illinois and a university in Mexico before transferring to Cornell. What brought you to Ithaca?
MK: Carl Sagan. Cornell was the only school at the time that had a department of planetary studies. And I wanted to study astrophysics.

‘About 700,000 Americans each year suffer strokes. Three-quarters will never return to work the way I’ve been able to. I want to set a national goal to get as many of those folks as possible to return to work.’

CAM: You ended up majoring in modern European history instead.
MK: Right. The professor who I remember most fondly was Walter LaFeber, who taught a course in the diplomatic history of the United States. One of the proudest moments of my time as an alumnus was when I went back to Cornell to give a talk on China. LaFeber and I got to spend some time together. I had no idea that his house was near my fraternity, Seal and Serpent.

CAM: What about Cornell prepared you for your career in law, the U.S. Navy Reserve, and then Congress?
MK: Cornell was where I worked the hardest that I ever worked. I learned I could study for three hours, rest, then study for another three hours. I went to the various coffee houses—the Green Dragon, the Apple Blossom—and would rotate among them.

CAM: Today you occupy the Senate seat once held by Barack Obama. How well do you know him?
MK: I’ve talked to him a couple of times. He called me after my stroke and wished me well. It was very nice.

CAM: What’s your assessment of his presidency?
MK: I’ve been disappointed. Especially, I’ve been a pretty strong critic of his on Iran issues.

CAM: Why are you so outspoken about Iran’s nuclear program?
MK: As a congressman [from Illinois for five terms], I became a leading voice on the safety and security of the State of Israel, to make sure that Israel survives the twenty-first century. An overarching goal for my political life has been to make sure the next generation of Americans never has to hear about a nuclear war in the Persian Gulf. One Holocaust was too many. 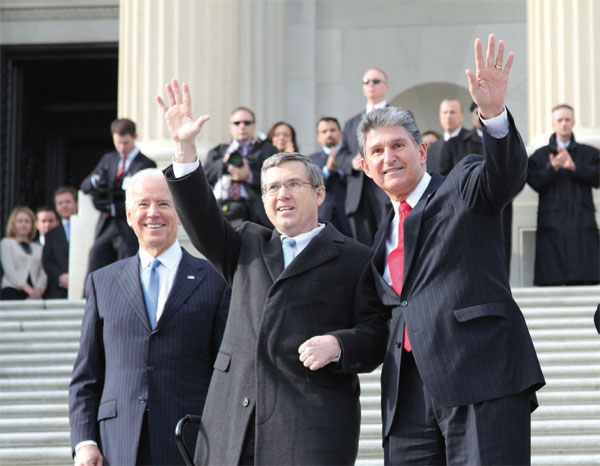 Bipartisan welcome: Senator Mark Kirk ’81 (center) was cheered by colleagues including Vice President Joe Biden (left) and Democratic Senator Joe Manchin when he returned to work at the Capitol after his stroke.

CAM: A large number of Republicans, including several of your colleagues in the Senate, are eyeing the White House in 2016. Do you have a favorite among the GOP hopefuls?
MK: No, I’m not going to make an endorsement. Let my fellow Republicans decide on their own.

CAM: Are you definitely running for re-election in 2016?
MK: Absolutely. I think we’ve raised nearly $3 million, and we’re not providing refunds.

CAM: How much of your time do you spend dialing for dollars?
MK: A lot. A lot of it.

CAM: You were narrowly elected in 2010; you’re from a state that typically goes Democratic in presidential election years; and there are questions about your stamina. What do you think when you see yourself described as the Senate’s most endangered Republican?
MK: I have never not been endangered. All of my races for the House and Senate have been top-tier races. So, for me, what is past is prologue. To be in a targeted race has been my whole career.

CAM: You support same-sex marriage, a woman’s right to choose an abortion, comprehensive immigration reform, and a ban on assault weapons. Do you feel lonely in your own party?
MK: No, no. I’ve always been a fiscal conservative, social moderate, and national security hawk. People across Illinois sometimes will turn on the TV and hear the extreme left and extreme right and wonder who in Washington represents them.

CAM: So you’re comfortable being a moderate Republican?
MK: Very much so. Moderation in all things. You try to make sure that you represent that practical, Midwestern view of the world. We come here to incrementally solve problems and make the world better by the time we leave this place.