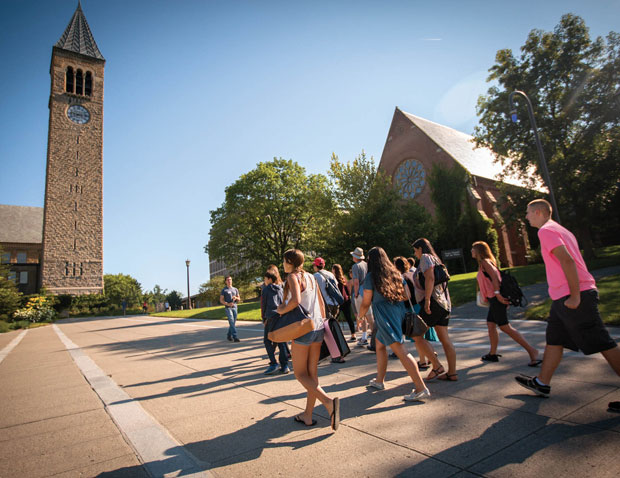 As he walks backward past Sage Chapel, campus tour guide Max Murray ’17 keeps up a running monologue. His audience, some two dozen strong, is simultaneously hanging on his every word and keeping a watchful eye as he nears the wide staircase that drops down to the Cornell Store. “It’s crazy what $30,000 could do back then,” Murray says, marveling at the chapel’s nineteenth-century price tag. He touts Cornell’s nondenominational status, noting that it earned the University such sobriquets as “the Godless institution” and “the heathens on the Hill.” All the while he keeps walking, scarcely even glancing over his shoulder. 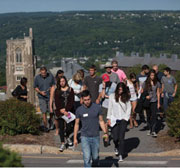 …except when crossing the street.

Murray is a native of Rochester, New York, with short brown hair and a warm smile. Although he has previously mentioned that he’s captain of the men’s gymnastics team—which implies a certain agility—it’s impossible not to worry that he’s about to tumble spectacularly down the steps. But just a few feet from the top, Murray pauses. “Cornellians love to come back and get married where they met their spouse,” he says, as the group exhales a collective breath. “But Sage Chapel was never intended to be a place where people got married, so the bride has to get ready in the University crypt—which sounds kind of spooky, but it’s actually beautiful back there. Rumor has it that if a bride gets cold feet on her wedding day, our founders will rise up from their graves, zip up her dress, and give her a gentle push down the aisle. Because,”—he winds up to the punchline—”who could go wrong marrying a Cornellian?”

Murray (finally) rotates forward, heads down the stairs, and launches into praise of the Cornell Store and its varied offerings, from computer equipment to tasty snacks. Outside Barnes Hall, he lauds the career services office. (“We have a motto: ‘Once a Cornellian always a Cornellian.’ Say you find yourself at forty-five years old and you want to change your career path. You can call or come visit, and they will do the same duties as if you’re still an undergrad.”) Passing near Gannett, he describes the health center as “basically our university’s version of a really large nurse’s office”—and notes that its services include massage therapy. “These massages are not free,” he allows, “but they’re put on your bursar’s account where your parents pay your tuition. And it just says ‘doctor’s fee,’ so they never need to know you’re getting a massage with their money, which is a lovely thing.” He surveys the mixed-age group of grown-ups and high schoolers, flashing a conspiratorial grin. “I guess I should say that when there’s only students around.”

It’s a Monday toward the end of June, and the University tour machine is in high gear. Murray, an operations research and information engineering major, is part of a roster of eighty undergrads that Cornell employs to escort approximately 50,000 people on free, hour-long tours of Central Campus each year. It’s a competitive gig; according to Taiya Luce, the University’s director of visitor relations, the guide program accepts only about 10 percent of applicants. “We’re looking for people who can work with diverse groups, who are flexible and charismatic, who can answer tough questions honestly and authentically,” says Luce. “Parents are looking at this tour guide and thinking, Will you be my kid’s friend? Is my student going to have a community here? So we focus on inspiring visitors and showing them that even though the campus is large, you can make it your own.”

Headquartered in Day Hall, Luce’s office is responsible for more than just tours; her student workers also rotate among the campus traffic booths, information desk, and University switchboard. In addition to being veritable Wikipedias of Cornell lore, they’re encouraged to connect with visitors on a personal level—to offer insight into what it means to be a student on the Hill. “We’ve moved away from a lot of facts and statistics, which make people’s eyes glaze over,” says Luce, adding that many of those details are easily found online anyway. “We focus more on authentic storytelling.”

Hence Murray’s descriptions of his business minor, his love of Chipotle, his impending trip to Iceland—and the time he got academic credit (in a freshman writing seminar) for watching “The Simpsons.” More than once, he integrates impressive Cornell facts and cheeky self-deprecation into the same paragraph, as when the group passes Uris and Olin: “In our eighteen libraries we have over 8 million volumes of books, but if that’s not quite enough, don’t fret, we have a borrow-direct program with the other seven schools of the Ivy League as well as Stanford and MIT, and they’ll send it to you in two days. I’ve never checked out a book; I’m not even really sure how I would go about doing it. But if I wanted to, I’m sure it would be very easy.”

Cornell’s tour guides earn about $9 an hour; as Luce notes, there are lots of less demanding campus jobs that pay more. But for many of the student workers—who generally put in eight to ten hours a week during the school year and around thirty over the summer—the gig is a passion and a calling. Like countless subgroups on campus, from varsity teammates to a cappella singers, the tour guides are a tight-knit bunch. Since training takes a full semester, most come on board as freshmen or sophomores, and many stay on until graduation. “Most of my best friends are on the tour guide staff, and we hang out all the time,” says guide Ronnie Forster ’17. A Maryland native majoring in mechanical engineering, Forster didn’t make the cut on his first try, but was inspired to reapply after a friend said it was one of the best things she’d ever done at Cornell. As he recalls: “I thought, This is amazing. I can work on my social skills and get paid.”

You are here: In addition to giving tours, students staff traffic booths, phones, and the Day Hall information desk.

But it isn’t a low-pressure job. Not only must the guides cope with hordes of ravenously curious parents and high schoolers nurturing Ivy League ambitions, but they lead tours in all kinds of weather—and, as previously noted, do it walking backwards, the better to connect with their audience. The guides are trained to field tough questions about such thorny issues as personal safety (they respond by discussing the Blue Light escort system, among other things) and Cornell’s reputation for gorge deaths and academic stress. “We get asked the suicide question,” Luce admits. “A lot of what we say is that we’re on par with the national average for that age group. We talk about our mental health framework, the resources at Gannett.” On occasion, tours will get heckled by random smart-alecks or wind up in the thick of student protests on Ho Plaza or in front of Day Hall—and even those disruptions get a positive spin. “We explain that this is an active campus where people are free to share their voice, and they do,” says Luce. “Parents love it.”

It is, perhaps, no surprise that some tour guides are contemplating careers in public relations—as is Emma Jesch ’16, a communication major in CALS who joined the staff as a freshman and has risen to student manager. She notes that her training has already come in handy, particularly when she interned at a think tank during the Cornell in Washington program last spring. “I was able to hit the ground running,” says Jesch. “I was answering phones, helping people navigate around the office, and most importantly trying to represent the project to the media—and this job prepared me perfectly for it.” Similarly, Forster cites his guide training as a distinct advantage in applying for jobs in Engineering’s co-op program, where students spend a semester working off campus. “When you’re in an interview you have to think on your feet, and that happens on tours all the time,” says Forster, who landed a plum post at NASA’s Jet Propulsion Laboratory in California. “Having that year of tour guide experience under my belt gave me the ability to put on my best face for employers.”

Never mind if a guide is having a bad day, be it a failed prelim or a romantic reversal; he or she has to rally, because the tour staff embodies the University to visitors. While Cornell’s reputation may be sterling and its facilities fantastically impressive, a guide can make or break a prospective student’s impression of the place—potentially influencing a decision to apply and even changing the course of a teen’s life. Forster, for his part, recalls that the guide who took him and his family around campus “really set the vibe of Cornell.” “That one person you interact with for an hour gives you an idea of what the student body is like,” he says. “I remember doing the whole Ivy League loop, and some were better than others. At some universities, even though they were amazing academic institutions, I just didn’t get the right feel because that one person wasn’t my idea of what I wanted from my college experience. It’s crazy that it had such an impact, but it did.”

Last year, Jesch was in the Collegetown Starbucks when a young woman recognized her, greeting her warmly and declaring that Jesch had been her tour guide. “She said, ‘I wound up coming to Cornell because of that tour—I applied because you were my guide,’ ” Jesch recalls. “That’s such an incredible feeling, to know that you impacted someone’s future.” Did Jesch have a similar experience as a pre-frosh? Ironically, not so much. Jesch grew up in Ithaca; her dad works at Cornell, where he’s a research assistant in molecular biology and genetics. “So when I came to visit campus,” the avid guide admits with a grin, “I never actually took a tour.”