They say you have to crack a few eggs to make an omelet. But to solve a decades-old physics question originally posed by one of the field’s greatest minds, it took Ronald Heisser a whole lot of spaghetti—upwards of 1,000 noodles.

Heisser is a doctoral candidate in theoretical and applied mechanics on the Hill, doing robotics research in the lab of Engineering professor Robert Shepherd. But when the San Antonio native was an undergrad at MIT, he did a project for an applied math class that solved a problem that had once flummoxed the great Richard Feynman—work that garnered Heisser a bit of media fame last summer.

As the story goes, Feynman and a colleague were making a spaghetti dinner one night when they noted an odd property of the uncooked noodles: when you try to break one in half, it almost always produces three or more pieces instead. Feynman and his friend spent hours snapping noodles and puzzling over the question, but they never figured it out. In 2005, two Frenchmen came up with the answer. “We find that the sudden relaxation of the curvature at the newly freed end leads to a burst of flexural waves, whose dynamics are described by a self-similar solution with no adjustable parameters,” they wrote in an academic paper. “These flexural waves locally increase the curvature in the rod and we argue that this counter-intuitive mechanism is responsible for the fragmentation of brittle rods under bending.”

Or, as Heisser translates it into layman’s terms: “After the spaghetti breaks once, there’s this kind of wave that travels, where it unbends; and because it’s a thin, brittle material, that concentrates the bending even more and causes it to break again.” 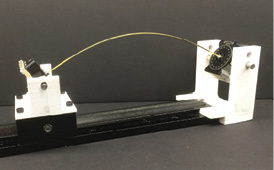 The spaghetti-bending machine he built for a class at MIT.Provided

In spring 2015, Heisser and an MIT classmate followed up on that research by studying whether it was actually possible to break spaghetti in half. For accurate measurements and precision, Heisser built a simple machine to attempt the task—and as it turned out, the secret was to twist each noodle to a degree beyond the ability of human hands, while also bending it. “If you twist it, you’re adding extra force,” explains Heisser, who graduated from MIT in 2016 with a double major in mechanical engineering and philosophy. “The total force required to break it doesn’t change, so you end up having to bend it less”—making the ensuing wave weaker, and preventing the strand from
breaking subsequent times.

In early August, Heisser was the first author on an article describing the work in Proceedings of the National Academy of Sciences, a prestigious academic journal—and soon, media including the Washington Post, NPR, and the BBC came calling. “This is another example of the fact that you don’t have to work at CERN [the particle accelerator in Switzerland] to do science—you don’t have to do something highfalutin,” he says. “There are undiscovered things, big and small, under our noses all the time.” And if Heisser could time-travel back for a tête-a-tête with Feynman—who taught at Cornell in the Forties and gave a famed series of lectures on the Hill in the Sixties—what would he say? “I wouldn’t spoil it—I’d let him try to figure it out,” Heisser says with a laugh, then reconsiders. “But I would whisper in his ear: ‘Twist it.’ ”

3 thoughts on “Using His Noodle”