What do the commissioners of the National Hockey League and Major League Baseball, the president of the American Federation of Teachers, a New York State senator, the former CEO of Xerox, and the founders of both Parenting magazine and Priceline.com all have in common? They’re alumni of the School of Industrial and Labor Relations (ILR)—which is celebrating its seventy-fifth birthday this fall.

On November 5, 1945, 107 undergrads and eleven grad students met on the Hill as members of ILR’s inaugural class. The school had been founded—thanks to a New York State land-grant bill—in response to an emerging trend across the nation: an increase in disputes in the American workplace. In the wake of the Great Depression and amid a rapid expansion in unionization, there was a growing disconnect between management and the labor force. “The state legislature wanted to establish a school to promote better labor relations through research, teaching, and extension work,” says Dean Alexander Colvin, PhD ’99, who did his doctoral work (on conflict resolution) at ILR, whose faculty he joined in 2008. “That’s still an important part of the education our students get today. To understand labor employment issues, they really need to understand the perspectives of both the employers and the workers.”

Students in front of Warren Hall, where ILR held its first day of classes. Provided

ILR has since grown to encompass more than 970 undergraduates, 240 grad students, and some 13,000 alumni with careers in a wide variety of arenas, from law to organized labor, business to the nonprofit sector. While all undergrads have the same major (industrial and labor relations) and gain a foundational knowledge of the social science and economics of the field, they can select from many electives to tailor their education to their interests, from environmental policy to sports management. “My favorite part of this school is the people—both the professors and the students,” says ILR student Polina Solovyeva ’21. “We all come from very different backgrounds and have differing views when it comes to labor relations, but there’s a collaborative nature here. We hear both sides and learn from one another.” 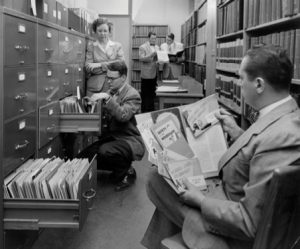 Researchers at what is now the Kheel Center for Labor-Management Documentation & Archives.Provided

As the world’s first school devoted to college-level study of workplace issues, its founding faculty had to shape the curriculum from scratch, drawing from established disciplines like economics and law. After holding the first day of classes in Warren Hall, students and faculty worked out of cramped, temporary wooden buildings near Sage Hall that would be ILR’s home for fifteen years. It wasn’t until 1960 that the school relocated to the newly constructed Ives Hall, on the corner of Tower Road and East Avenue, where it remains to this day. “The School of Industrial and Labor Relations throve,” wrote Morris Bishop 1914, PhD ‘26, in A History of Cornell. “The staff were swamped by demands for their services, to conduct community courses, educational programs, conferences, institutes. ILR graduates found ready employment and justified all the bold provisions of the school’s founders.”

ILR students from decades ago touring a textile factory.Provided

Since the school’s inception, it has consistently been a pioneer in such fields as labor economics, dispute resolution, and human resource management. Several dedicated institutes and centers—on topics including conflict resolution and broadening employment opportunities for people with disabilities—have been established within ILR, to facilitate its outreach and research efforts. More recently, the school’s expertise has been tapped by media outlets on such topics as best practices for working remotely, how to navigate reopening businesses during the coronavirus pandemic, the role of technology in the workplace, and pay and opportunity gaps for minorities. “In each of the areas we turn our attention to, we are regarded as strong leaders,” says Francine Blau ’66, the Frances Perkins Professor of Industrial and Labor Relations and a professor of economics, who attended ILR as an undergrad and has been teaching there since the mid-Nineties. “The ILR school is looked to for our research and knowledge, both nationally and internationally.”

As the American workplace has evolved and diversified, so have ILR’s offerings. And as the economy has globalized, the school has created courses on labor relations in Western Europe, Japan, and the Middle East, as well as undergrad programs in India and Vietnam (though travel this semester has been postponed or canceled due to the pandemic). “You think of traditional labor relations as being about auto workers and steel workers,” says Colvin, also the Martin F. Scheinman Professor of Conflict Resolution. “Nowadays, we’re thinking about nurses, teachers, and retail workers—jobs that have become far more diverse, with respect to both gender and race.” 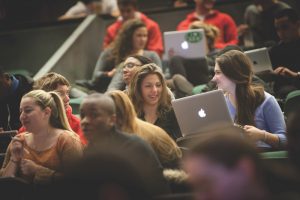 But as Colvin observes, while much at ILR has evolved over the past seventy-five years, one thing hasn’t changed: its longtime status as one of the most socioeconomically diverse schools at Cornell. “The accessibility of the in-state tuition has allowed a lot of New York State families, who otherwise would not have been able to afford an Ivy League education, to send their children here,” he says. “That’s an important legacy, and a way in which ILR contributes to the tradition of ‘any person, any study.’ ”