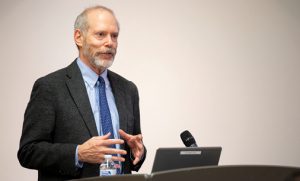 Pillemer speaking at a panel discussion with other Cornell faculty in December 2019.Simon Wheeler

When human development professor Karl Pillemer was doing research for his 2011 book, 30 Lessons for Living, he collected data from more than 1,200 people in their seventies and beyond. Among the questions he asked them was to share their biggest regrets. “I heard again and again that an estrangement from a family member was one of the most painful life experiences that older people could reflect on,” he recalls. “I began to see how common it was. Then I went to the literature—and found this was one of the most under-researched major problems I’d ever seen.” That inspired him to survey 1,300 adults in the U.S. “I was absolutely stunned to find that fully 27 percent said that they, right now, have a close relative from whom they are estranged,” says Pillemer. “That translates to 68 million people. Numbers don’t always speak for themselves, but in this case they kind of do; it’s much more prevalent than most people imagine.”

In September, an imprint of Penguin Books published Fault Lines, Pillemer’s examination of estrangements—as well as practical strategies for ending them. The book is based on the findings of the Cornell Family Reconciliation Project, which interviewed 300 people who’ve endured estrangements, including 100 who re-established relations with their estranged relatives.

First off, could you define “estrangement”?

For our study, it means no contact—or as little as you can have in this hyper-connected society. There’s something qualitatively different between a bad, distant, or conflictual relationship and one where a person is cut off entirely—where somebody, despite family ties, obligations, and social norms, says, “I’m never going to see you again.”

What are some of the most common reasons for it?

Often it has to do with divergent values and poor communication. We also found that violated expectations are key: one archetypal example is, “Mom gets sick, daughter is looking after her, and brother and sister won’t help.” And we found some common situations that moved a negative relationship into estrangement. One is inheritance and money. A second is the problematic in-law: a spouse—either in the child generation among siblings, or parents who remarry—is incompatible with the rest of the family. A third I call the “long arm of the past”—a history of harsh parenting, parental favoritism, vicious sibling rivalry. In many estrangements, too, a single, transformational event, conversation, or moment precipitates the final break.

You coin the term “defensive ignorance” regarding the reasons for estrangement. What’s that?

Over and over in my interviews I heard estranged people say, “I have no idea why this occurred”—and then they’d list a lifelong history of conflict, unmet expectations, and criticism of the other person. People are so disturbed by the estrangement that they become extraordinarily defensive, and it becomes an almost insurmountable barrier to reconciliation. The people who reconciled worked their way through that and were able to understand the role they played in the estrangement.

You also observe that it’s easier for a child to cut off their parent than the other way around. How so?

Parents have invested time, resources, and emotion in producing these kids and have a great stake in receiving emotional and physical support back from them; in contrast, adult children are moving on with their lives and have many other relationships. Not that the children don’t care about the relationship, but there’s a strong bias that parents care more. I found that many parents don’t think about that. They believe that by having provided a decent childhood, their kids will stay with them no matter how they behave. But if they’re going to draw a line in the sand—insist that their expectations be fulfilled, or demand a certain kind of relationship with their child—they need to know that they could really lose out.

How do estrangements affect other family members?

One of the strongest recommendations I’d give to someone who’s having a fight with their brother or sister and decides that it’s over is this: think about the effects on ensuing generations. If it’s over between you, it may very well be over between your children and their cousins. In my own family, there was a rift in the grandparental generation that cut us off from an entire side of the family. I don’t usually prescribe advice, but before people begin a family rift, they should think about the collateral damage.

One source for your research was Facebook groups, both for parents estranged from their kids and vice versa. What role do they play?

These groups provide some support but often can inhibit reconciliation. The adult children reinforce each other’s views that their parents are narcissists; for the parents’ groups, it’s that the children are spoiled, ungrateful, or uncaring. There’s a whole lot of name-calling on both sides.

What were some of the common denominators among people who successfully reconciled?

Typically, they abandoned the idea that they needed an apology and that they and their estrangement partner had to agree on everything that happened in the past. And they often re-entered the relationship with clear terms or limits: For example: “Mom and Dad, you can come back into my life if you don’t criticize my spouse and my childrearing, and when you visit you don’t stay at our house.” And finally, most of them revamped their expectations and accepted the other person for who he or she is.

Many of the “reconcilers” in your book say they wish they’d done it much sooner. Why do people so often let estrangements linger?

Because the estrangement freezes the relationship; people don’t see how others are changing and improving. So when they get back together they say, “Why didn’t I do this a long time ago?” Reconciliation clearly isn’t for everybody, but I found that no one regretted it. Along those lines, another reason for reconciling was anticipated regret—people worry that it will be too late, that their relative is going to die before they have a chance to reconcile. Even though we don’t have hard data, I think we’re seeing this pattern even more during the pandemic.

You’ve tackled some tough subjects, including elder abuse; how does this compare in terms of being challenging to study?

In a world where people record most of their lives on social media, this is one problem that nobody really wants to talk about. People in estrangements feel isolated, ashamed, guilty, and stigmatized. And the truth is, if we hear a parent say, “I no longer have contact with my child,” often in the back of our minds we wonder what’s wrong with them. I’m immensely impressed and grateful that hundreds of people were willing to open up about this topic in my studies.

What has studying this taught you about families that aren’t estranged? 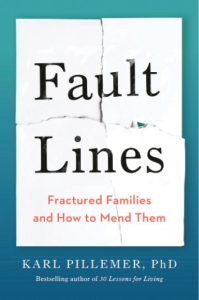 In an excerpt, Pillemer parses a common cause of estrangement: fights over inheritance

Money may not be the root of all evil, but it is at the heart of many estrangements. Conflicts over money that contribute to estrangements include failing to pay back a loan, deceiving a family member out of his or her funds, and not providing financial support when a relative believes it is necessary. One financial theme in particular stood out as a pathway to estrangement, however: conflicts over wills and inheritance.

Even though many people leave equal amounts of money to their offspring, a parent may punish one of the children by excluding him or her—sometimes to that person’s dismayed surprise. Even when the distribution of the financial portion of the estate is equal, some possessions cannot be divided. A family heirloom, a piece of fine jewelry, a work of art can go to only one person. In addition, an estate can be equal without being perceived as fair. For example, a daughter who gave up work to care for her frail parents may expect to receive a greater portion of the estate than her brother who never even visited.

Research has shown that inheritance exerts a powerful symbolic force that transcends the financial impact. As the sociologist Jacqueline Angel points out, wills can convey favoritism or disapproval in a way that is legally irrevocable and eternal. Everyday objects that take on intangible worth are fought over. The chipped platter that has no financial value is cherished because it served the Thanksgiving turkey for a half-century. Further, a will may specify that everything should be “equally divided,” but difficulty ensues when it comes to dividing a nonfinancial asset. In the case of Rayna Bergstrom [a pseudonym], her mother, and her aunt and uncle, the catalyst was the legacy of a business and a house.

Rayna grew up in a close-knit extended family, in which she had warm relationships with her mother’s two siblings and her cousins. She told me: “The estrangement took place between my mother and her brother and sister. It was an argument among the three of them, but it turned into an entire family debacle.”

The siblings were very close, as were their children. Rayna describes the extended family as a warm, secure environment: “It was amazing. It was so close. They lived close to us, and I remember holidays and birthdays and time spent at my aunt’s house with my cousins as such happy times.” It was not to last, however. Things began to fall apart when Rayna’s grandparents died. They owned a business, a house, and a summer home in Vermont that was much loved by the family.

An intense battle began over how to handle the estate that split the family for the next thirty years. From her viewpoint as a teenager, emblazoned in Rayna’s memory is the anger: “I remember them fighting all the time. I remember a lot of tears and a lot of angry phone calls and not seeing my cousins. Finally, there was a point where they were just done. As I understand it, my mother’s brother and his wife wanted to take over the family business and manage it themselves. His sisters and their husbands objected. They ended up selling the business and splitting everything three ways. That was the final straw, because around that time everything got cut off.”

Fighting between the siblings and their spouses went on for many years. According to Rayna: “They were fighting over who would get the china, who would get the contents of the house, and whether they needed to sell the house or not. My grandparents had left a will that said divide everything equally among the three siblings. But that would work only if everyone agreed to sell everything and split the profits. The uncle who ended up cutting himself off felt that he was being ganged up on by the sisters and their husbands. I’m not saying my parents were blameless, either. But my uncle never explained or discussed with me what my mother actually did to him.”

The rift that began thirty years ago still permeates the life of this family, creating both sadness and persistent anger among those involved. Rayna would feel better knowing why her uncle, aunt, and cousins behaved the way they did, but she has no way to satisfy her curiosity. She stated sadly: “The whole family was affected. My dad and my uncle were friends, and that ended. I had several cousins I was very close with, and they suddenly didn’t ever talk to us. They were my idols and they cut off ties with me. I want to know, ‘What in the name of God did you all do this for?’ I still want things to be cleared up for the record, or at least for there to be some closure of what it was that happened. I feel like I was punished. I wish someone had thought beyond themselves in this whole matter.”