Like any great university, Cornell has many traditions that alumni remember years after graduation: Dragon Day, Slope Day, throwing fish on the ice at the Harvard hockey game. For current students and recent alumni, one such event is the Duff Ball.

The ball (named for its location, the Engineering college’s Duffield Hall) started in 2008 as Cornell’s “senior prom”—a sold-out event that brings seniors together in their finest suits, dresses, and tuxedos to celebrate the end of their undergraduate years in style. More important, it raises thousands of dollars for the annual Cornell United Way campaign. 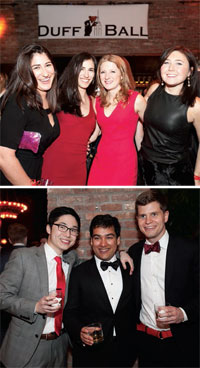 Night to remember: Celebrants at the Duff Ball-NYC, which did double duty as a Student and Academic Services fundraiser and a festive get-together for young alumni.

Jonathan Feldman ’08, who was a student leader of the United Way campaign, helped found the Duff Ball in 2008. More than a year ago, Feldman—who now lives in Chicago and is active on his class council—approached the Student and Young Alumni Programs team in Alumni Affairs with the idea of creating a flagship event for young alumni.  After months of planning, the first-ever Duff Ball-NYC was held in March, attracting more than 400 young alumni (defined as those who graduated in the previous ten years) to the historic Bowery Hotel in the East Village.

Guests included several University administrators, including vice president for student and academic services Susan Murphy ’73, PhD ’94, and dean of students Kent Hubbell, BArch ’69. Board of Trustees chairman Robert Harrison ’76 offered remarks that highlighted the changing nature of the Cornell student experience as the University approaches its sesquicentennial in 2015. “The University has done an amazing job at continuing to develop dynamic events to bring alumni of all ages together,” says Katie Bartels ’06. “It’s incredibly important to keep established traditions such as Zinck’s Night going strong, but also to try out new events to engage alumni.”

While the original Duff Ball supports the United Way, the alumni version raised money for the Student and Academic Services Annual Fund. Thanks to the generosity of an anonymous donor, nearly $45,000 was raised; all proceeds went to support the fund.  “It was such a blast seeing so many Cornell friends at the alumni Duff Ball,” says Olivia Moore ’12. “Everyone was having a great time, and you could sense that a wonderful tradition was in the making.” Says Angelique Boyer ’11: “It was great to catch up with friends while feeling fancy.” Ben Cole ’10 agreed, but offered one gripe. “If I had one complaint about the night,” he says, “it was that it ended too soon.”

Shane Dunn ’07 is a director from the region on the board of the Cornell Alumni Association.

Since 1999, alumnae of Big Red field hockey have been able to stay connected and give back to the team, thanks to the Cornell Field Hockey Association (CFHA). “I noticed that when I was a student-athlete, former players from the Class of 1989 would come back to watch the games and hang out with the players, and interacting with them was so important to me,” says Cari Hills ’98. “When I became an alumna, I wanted to create an opportunity for everyone to feel welcome and to talk about all the great things that await you after graduation.” The CFHA was born, becoming the first Cornell athletic alumni association for female athletes. 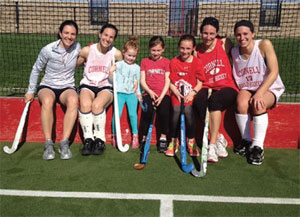 Next generation: Team members with some young fans

Since then, the CFHA has taken off. Governed by a board of ten members who serve two-year terms and meet monthly, the CFHA not only makes sure that former team members stay connected to Cornell and to each other, but also aid current players through career guidance. It has developed an opt-in database that matches alumni with current athletes, based on either geography or undergraduate major, creating one-to-one relationships. In addition to hosting a LinkedIn group for alumnae and student-athletes, the CFHA has a résumé review program;  alumnae can notify team members when they intend to visit campus, and individual meetings are conducted to provide feedback.

This past fall, after the game at Columbia, the team and alumnae held a dinner at the Cornell Club-New York, which featured a panel discussion about life after Cornell. “At first, you could tell that the team members were hesitant about the panel,” says Hills, “but once we got started, they really got into it.” Alumnae talked about their jobs, balancing career and mother­hood, and finding time to stay involved in athletics and physical fitness. 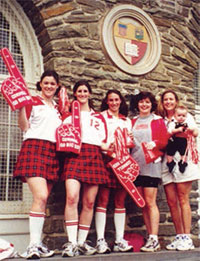 Each spring, the CFHA hosts an annual alumni and friends weekend, giving former players, friends of the team, and current athletes a chance to bond. In addition to a dinner and a brunch, activities include an alumnae/student game, an event with Cornell Outdoor Education (such as ziplin­ing over Beebe Lake or rappelling off Schoellkopf), and a leadership component to build skills among current players. Another aspect of CFHA’s mission is making sure that alumnae are aware of NCAA recruiting and interaction guidelines, so there aren’t any violations. The alumni board also has regional captains who organize tailgates wherever the team plays.

With its extensive array of activities and programs, the CFHA has become a resource for other teams’ alumni groups. Working with the Department of Athletics, they have created a “Big Red Toolkit” that offers templates for starting an association and creating invitations, newsletters, and other materials, as well as information on recruiting guidelines and hosting events. Coach Donna Hornibrook says that the CFHA has helped recruit new players, because applicants see that alumnae stay involved and support current athletes; when Hornibrook held a clinic for high school students in Washington, D.C., in October, three alumnae participated. Says Hills: “I hope we inspire students to stay connected to Cornell after they graduate and to give back.”

While the University continues to see record application numbers—more than 40,000 for 2012–13—the alumni volunteers who meet with these aspiring Cornell­ians around the world have set a record of their own.

Each year, the 9,000 members of the Cornell Alumni Admissions Ambassador Network (CAAAN), Cornell’s largest alumni volunteer organization, meet with applicants one on one. In addition, CAAAN members staff college fairs, host receptions for admitted students, and hold send-offs during the summer.

This year, more than 20,600 contact reports were filed by CAAAN volunteers—the first time the group has exceeded the 20,000 mark. “Even though we have about the same number of volunteers, alumni continue to rise to the occasion as the application numbers increase,” says Bruce Wag­ner ’64, ME ’66, outgoing chair of the CAAAN Advisory Committee, which works with the Office of Undergraduate Admissions. “The record number of alumni contact meetings reflects the continued achievement of our alumni volunteers. The CAAAN program showcases that Cornell alumni are eager and willing to give their time to their alma mater in a very supportive way.”

Why would a group of alumni leaders representing Cornell’s diversity groups spend a sunny spring Saturday indoors at the Medical College? They did so for a chance to share ideas and discuss how to work collaboratively, as part of the Cornell Mosaic retreat.

Mosaic helps to bring together the University’s minority alumni organizations, as well as others who are interested in diversity. According to Mosaic chair and University trustee Sheryl Hilliard Tucker ’78, the organization was created to help such alumni understand the value of a lifelong relationship with Cornell. “These individuals often don’t realize that the college experience doesn’t end when you graduate,” she says. “We’re here to extend the message that you can stay connected through the different diversity groups that exist.” 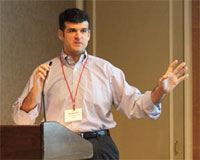 Mosaic retreat attendees heard from representatives of four of the major alumni groups—the Cornell Alumni Association, the Cornell Association of Class Officers, the Cornell University Council, and the President’s Council of Cornell Women—who described their plans for making their programs more inclusive. Says Tucker: “We need to put energy into making connections with other organizations so we learn about each other, and also help the University understand how we can all work together and increase the value of diversity.”

The retreat attendees also heard from development industry leaders who have expertise in fundraising among minority populations and got advice on how to tailor messaging to each population’s expectations. “We’re fortunate at Cornell, because we understand the value of diversity,” says Tucker. “Not all universities see how diverse groups can impact development, and tap into their time, talent, and treasure.”

One diversity group that is looking to tap the benefits of its alumni population is the Cornell University Gay and Lesbian Alumni Association (CUGALA). Believed to be the first college LGBT alumni organization in the U.S., CUGALA had long been run under a loose organizational structure, says current president Emanuel Tsourounis ’00, JD ’03.

According to Tsourounis, a couple of years ago alumni leaders developed a plan to move the group forward, and to involve a new generation of LGBT grads, especially those whose experiences at Cornell were different from that of their predecessors. “We realize that for people who went to Cornell before about 2000, the LGBT experience on campus was significantly different than for those who are there now,” he says. “However, many of the same problems still exist for both students and alumni, and we knew that a stronger alumni organization could benefit everyone.” 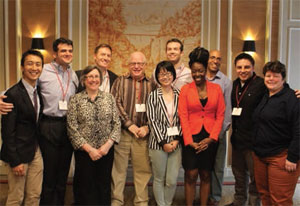 Working over the past two years to create more events and implement a more formal organizational structure, the group was able to discuss its vision with other LGBT alumni at its first-ever annual meeting, held in April at the Cornell Club-New York. About fifty alumni attended in person, plus several dozen more who took part via live stream. At the meeting, Tsourounis presented plans for the organization’s future and the group approved changes to its charter and bylaws. In addition, Art Leonard ’74, one of CUGALA’s co-founders, talked about the birth of the organization and its early years, including challenges during the HIV/AIDS epidemic of the Eighties.

CUGALA members also voted for the group’s first board of directors. Tsourounis says that when the call went out for alumni to serve on the newly formed board, only a handful of responses were expected—but more than twenty people volunteered. “It shows the level of interest and need for this organization,” he says. “I’m excited for the future of CUGALA.” In addition to discussing events for the coming year, Tsourounis announced the first-ever reunion of LGBT alumni, which will take place in Ithaca in June 2014. “We’ve really built this organization up,” he says. “I’m also excited to be working collaboratively with Mosaic and the other diversity alumni organizations to engage alumni and make Cornell a more inclusive place for all of us.”

As of July, Nicole Del Toro ’91 and Susan Rodriguez ’81, BArch ’82, are among the newest members of the Board of Trustees. They were the top vote-getters from the nearly 25,000 Cornellians who participated in the annual alumni trustee elections. Cornell is one of the few major universities that allows its alumni to elect trustees from their ranks directly to its board.

Rodriguez is a founding partner and design principal at Ennead Architects, an internationally respected architecture firm in New York City. She is a member of the President’s Council of Cornell Women and serves on the College of Architecture, Art, and Planning Dean’s Advisory Council.