Out of the corner of his eye, Jacob Flynn ’16 saw a zombie disappear behind Bailey Hall. He started running for his life. But before he could reach the safety of Malott Hall, a second zombie appeared to his right and went in for the kill. Flynn chanced a glance behind him—and saw that the first zombie was sprinting in his direction. He was trapped. In a desperate bid for survival, Flynn shot off all his remaining ammunition and managed a narrow escape. 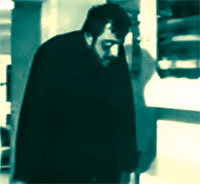 I WAS A TEENAGE ZOMBIE / GOOGLE.COM

Welcome to East Hill’s own zombie apocalypse: Human Versus Zombies, which attracts hundreds of students for a campus-wide version of tag. Held twice a year since fall 2011, the ten-day event begins with one “original zombie” who spreads the plague by tagging other players. (Humans wear a red bandana on one arm to denote participation in the game; once they’re zombified, they move it to their head.) Although zombies can’t be killed, humans can momentarily stun them by hitting them with rolled-up socks. “Safe” zones include buildings, stairways, vehicles, and roads—but otherwise, the game is always in session. Players also participate in optional “missions,” in which humans must accomplish an assigned task while avoiding zombification. “But as the zombie percentages increase,” observes Will Andrews ’16, “the missions become deathtraps.” Not all players aim to survive. As engineering major Dustin Franco ’14 puts it: “Being a human is half the game; being a zombie is the other half.”

As the number of zombies grows, the remaining humans become increasingly alert—to the point of paranoia. Biological sciences major Anna Stapelfeldt ’14, who managed to stay human until the final day of last spring’s contest, followed a strategy of avoidance. “You have to find ways to get around areas frequented by zombies,” she says, “like the Engineering Quad and North Campus.”

Humans Versus Zombies is the main event hosted by the Cornell Outdoor Recreational Gaming Initiative (CORGI), a club that also organizes Capture the Flag contests and a team version of tag called Manhunt. So far, each side is batting .500; the zombies have won twice, including last spring, when the majority of humans were turned after failing at a mission to assemble a signaling device. Says CORGI vice president Samantha Bobra ’13: “It was great seeing people so immersed in something that’s completely nonacademic, silly, and fun.”

Engineering major Chris Song ’14, who has played Humans Versus Zombies three times, says the game brings back memories of playing tag at recess. After two semesters of staying human, though, last spring he wanted to play for the other team. “I went onto campus with no defense, actively looking to get turned,” he says. “When I found the original zombie, I high-fived him.”