During Homecoming week­end, six people were presented with Cornell’s highest alumni honor, the Frank H.T. Rhodes Award for Exemplary Alumni Service. These individuals are true alumni leaders, volunteering for a broad range of activities—from class and regional club events to the Cornell Alumni Admissions Ambassador Network (CAAAN) to serving on the Board of Trus­t­ees. But what motivates them to give their time and talent back to Cornell?

The simple answer from Rhodes recipients: because Cornell gave them so much.

Samuel Fleming ’62, a Cornell volunteer for forty-five years, served in the military after graduation and then went to grad school—but as soon as he relocated to the Boston area, he got involved. Initially, his volunteer activity consisted of interviewing prospective students in chemical engineering, the program from which he graduated. Although he stayed involved through the years, the pivotal moment in his volunteer career came when President Rhodes invited him and two dozen classmates to return to campus for a dinner in advance of their 25th Reunion. Nearly everyone accepted.

Rhodes was concerned with the “lost generation”—those students from the Sixties and Seventies who had lived through the Vietnam era and lost their connection with, but not their love for, Cornell. Each of the dinner attendees was charged with getting twenty-five classmates involved with Cornell. Sam got twenty-five out of thirty-two chemical engineering classmates to help fund a speaker series that still runs today. Says Fleming: “I was officially hooked.”

For fellow engineering alumnus Alan Rosenthal ’59, his prime motivation was a feeling that he was obliged to give something back. “Cornell did a great deal for me,” says Rosenthal, who also volunteers as a docent at New York’s Metropolitan Museum of Art. “The College of Engineering gave me access to great teaching. But the whole college experience—and that includes access to the humanities—made me a success.”

Bob Huret ’65 says that the main reason he volunteers is simple: because it’s fun. “You get to meet an amazing group of people way beyond the group you knew in school; some were in school the same time you were, but you’d never met them,” he notes. “Over the decades, I’ve made wonderful friendships. Secondly, you have the opportunity to have a positive impact on the University. Finally, there is no set path; you can do whatever is of interest to you.”

Each of the Rhodes awardees has forged his own volunteer path. “I love to give back through students,” says Rosenthal. “Here we have these young people who are trying to find their way. I get lots of satisfaction by speaking with them, telling them about my experiences, offering my guidance. Most of the things I do relate to the undergraduate experience, whether it’s mentoring or doing CAAAN. I bring a taste of the outside world to the academic communities.”

For Huret, volunteering is more than worth the time commitment. “You have the opportunity to meet faculty, staff, and administrators and form great friendships,” he says. “You learn and participate in something much bigger than yourself. Representing the University is enormously gratifying; you are never taken for granted. You can never tell where connections you make in volunteering are going to lead. I love seeing the people, doing the work, and watching the impact.”

Fleming recalls one of his early volunteer efforts, promoting Cornell’s chemical engineering program to Boston-area students in the late Sixties. “The response I got,” he says, “was that Cornell was a good safety school, but they wanted to go to MIT or Stanford.” He realized that Cornell was not getting the message out about how great its chemical engineering program was. He got permission from the University to share information about the program with high school guidance counselors—and as a result, a number of students wound up matriculating.

Volunteering does have its challenges—not only in finding the right way to support Cornell, but in getting others to get on board. “The biggest challenge is knowing where to get started,” says Rosenthal. “You have to find what your passion is and give back through that. I always suggest CAAAN; for me, a key point of engagement was the Engineering Advisory Board. You need to plug the person into the right spot. And when you volunteer to do something, Cornell is supportive beyond belief.”

Huret seems to follow the axiom that if you want something done, give it to a busy person. “The best volunteers are the busiest volunteers, the ones who are already doing lots of stuff,” he says. “Those that have kids, jobs with increasing responsibilities, career and family issues, and other volunteer activities. They’re still willing to get involved. The challenge is getting the best people to find the time to make volunteering for Cornell a priority.”

Fleming says the first step in recruiting volunteers is simply a matter of getting them involved. “Once they dip their toe in and meet all the wonderful people who are part of the Cornell volunteer community, most are committed to staying involved,” he says. Fleming asks people to describe their favorite memory of Cornell. When he sees a sparkle in their eye, he asks about ways in which they can spread that excitement to others.

According to Huret, the first step in getting alumni to volunteer is simply to approach them. “Others assume they are just too busy and won’t do it,” he says. “Some will naturally volunteer. Most people are waiting to be asked; it was certainly true of me. Another way is to start small—‘Could you help with an event we are having?’—to get them involved so they can see how much fun volunteering can be.”

Rosenthal suggests telling people how Cornell and volunteering have helped your career. “You have to give people a mission,” he says. “What can they do to help Cornell? What are their interests?” Rosenthal is greatly interested in the volunteer management system that will be available for preview at the Cornell Alumni Leadership Conference (CALC) in January, as it will give alumni a starting point for volunteering. Adds Huret: “At CALC, talk to alumni and you’ll see everyone has a story. Most can point to a specific event or person that motivated them to get started.”

All agree on one thing: they give back because Cornell has given them so much. Says Fleming: “Everything started because of the life-altering, wonderful experience I had as an undergraduate at Cornell University.”

Ruth Zimmerman Bleyler ’62 is chair of the Cornell Plantations Advisory Council, a life member of the Cornell University Council, and the newly elected president of the Class of ’62. Ruth has served as chair of the Boston-area Tower Club. She has been an active member of the Regional Campaign Committee for more than a decade and served on her 45th Reunion Campaign Major Gifts Committee and her 50th Reunion Campaign. She has served as chair of three reunions, including her 50th. She has also chaired the Washington, D.C., Cornell Alumni Admissions Ambassador Network (CAAAN). 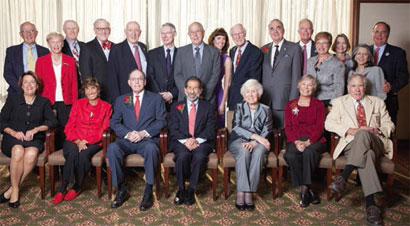 Ann Schmeltz Bowers ’59 is an emerita member of the Board of Trustees and a Presidential Counselor. Ann was a leading voice in the creation of the Cornell Silicon Valley program and is a founding member of the CSV Advisory Council, which she now chairs. She co-chairs the Major Gifts Committee and has served as chair of the Education/Teaching Committee of the Life Sciences Advisory Board. She served four years on the advisory council for the Johnson Museum and is an emerita member of the President’s Council of Cornell Women.

Samuel Fleming ’62 joined the Board of Trustees as an alumni-elected member in 1997 and was elected by the board for a second term in 2001. In 2009 he became trustee emeritus. He established and chaired the Life Sciences Advisory Board in 2005 and has served on the Engineering College Advisory Council since 1996. He is also a member of the Weill Cornell Board of Overseers. He helped spearhead a multi-million-dollar fund­raising campaign to restore the Sigma Chi fraternity house.

Robert Huret ’65 is a lifetime member of the University Council and served on its administrative board for fourteen years, including a term as vice chair from 1998 to 2000. He led the effort to found Cornell Silicon Valley and provided the inspiration, leadership, and seed funding for Cybertower, which enables alumni to stay involved remotely in the intellectual life of the University. A graduate of the School of Industrial and Labor Relations, he and his wife, Judy, created the Duncan MacIntyre Award for excellence in teaching. In 2005, he received the Jerome Alpern Distinguished Alumni Award from ILR. He has served as an alumni-elected member of the Board of Trustees and successfully led the campaign to renovate Lynah Rink. 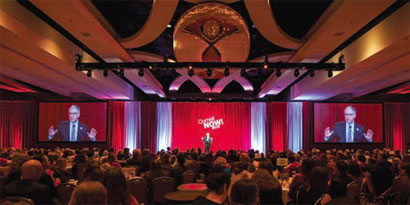 Sessions will focus on exploring fundamental skills used by a broad range of volunteer leaders. Topics will include communication, leadership, building and maintaining relationships, project management, strategic planning, and engagement. Participants will share best practices to foster collaboration among the many types of volunteer organizations. Reunion leaders will spend the weekend in sessions to plan Reunion 2014.

CALC is also a time to recognize volunteer engagement, which will include the presentation of the second annual Cornell Alumni Association Cup. This award is voted on by CALC attendees and is based on submissions from volunteer groups describing the outstanding programs they created in the past year. In addition, the Cornell Association of Class Officers will present the annual William “Bill” Vanneman ’31 Outstanding Class Leader Award.

More information about the conference is available at alumni.cornell.edu/calc.