In his book Mathematical Card Magic, Colm Mulcahy, PhD ’85, shows that performing card tricks can be as easy as pi. Through visuals, detailed instructions, and a few math lessons, the Spelman College professor explains the mathematical basis of various card tricks, teaching readers to become so-called “mathemagicians.” “You can do a trick and amaze your friends without knowing the math,” he says. “But if you know a little math, you can appreciate why it works.” 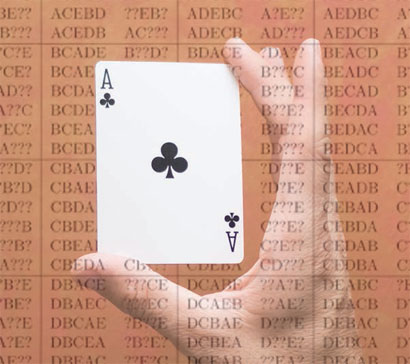 A fan of card magic for the past decade, Mulcahy authors a bimonthly blog on the subject for the Mathematical Association of America. The topics of those columns, along with some new tricks, are compiled in Mathematical Card Magic. The book—which also offers tips on shuffling techniques, showmanship, and audience interaction—is divided into thirteen chapters of four tricks each, for a total of fifty-two. That, of course, corresponds to the makeup of a deck of cards, which Mulcahy calls “an astonishing laboratory for experimentation.”

Mulcahy opens with one of his favorite tricks, the “Three Scoop Miracle.” The performer starts by handing about a quarter of the deck to an audience member, who is asked to name his or her favorite ice cream flavor. After the cards are shuffled, the mathemagician deals one card for each letter of the chosen flavor—if the participant says chocolate, for example, the total would be nine—and places the remainder on top of the pile. After repeating the count two more times, the performer can “magically” identify the top card in the pile. Says Mulcahy, an undergrad alumnus of University College, Dublin: “It’s amazing what these fifty-two pieces of paper with different numbers and values on them can do.”

While the principles behind the tricks may be sophisticated, their execution is relatively straightforward—so much so that Mulcahy taught his daughter to perform one with him when she was in elementary school. “She didn’t understand big words like ‘permutation,’ and ‘combination,’ but I was able to explain it to her at a performance level,” he says. “She and I would do it together at parties, and it blew people away.” Although Mulcahy’s book does get technical at times—touching on such fields as algebra, probability, and statistics—he stresses that Mathematical Card Magic isn’t a standard math text. “There are almost no equations in it; there’s an old joke that for every equation in a book, you halve the number of sales,” he says. “I tried to make it accessible for people who don’t know much about mathematics, with the hope that it would inspire them to learn more.”