A pressed, dried iris flower and the breast feather of a great blue heron (right), as seen through CHESS’s new Maia detector.

Flowers, feathers, and beetles took etheral form in March, when the Cornell High Energy Synchrotron Source (CHESS) invited campus researchers and friends to participate in a trial run of its newest piece of equipment: a 384-sensor, energy-dispersive detector dubbed “Maia.” Developed by Australia’s national science agency and the Brookhaven National Laboratory on Long Island, it offers significant improvements in data gathering. “One use of this combination of energy resolution and high count rate,”  staff scientist Arthur Woll, PhD ’00, reports on the CHESS website, “is to map the elemental composition of objects with breathtaking resolution in a much shorter time than was previously possible.” 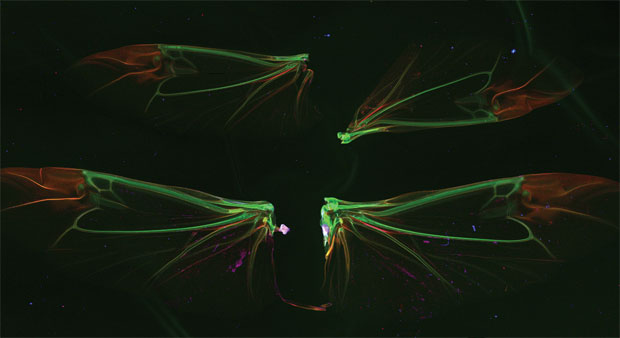 The wings of Asian longhorned beetles.

Woll led the inaugural Maia project, which included mapping an iris flower pressed by his six-year-old daughter, Lucy. It created what he describes in technical terms as “a false-color representation of potassium, calcium, and zinc concentrations.” But the image, he goes on to note, “is striking for both its beauty and the precise information it contains.”