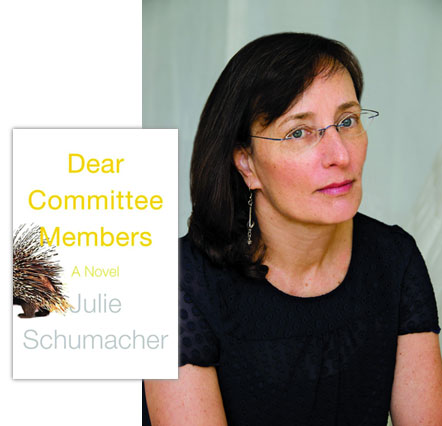 The book, which briefly appeared on the New York Times best seller list in September, renders a complex portrait of one Jason T. Fitger, a professor of creative writing and semi-professional curmudgeon working at a Midwestern university. In the novel, published by Doubleday in August 2014, Schumacher, MFA ’86, deftly details the dissatisfaction gnawing at many in the humanities, skewering a system she knows intimately: in addition to being an alumna of Cornell’s highly regarded and notoriously selective MFA program, she teaches writing at the University of Minnesota, St. Paul. “Schumacher has a sharp ear for the self-pitying eloquence peculiar to academics like the fictional Fitger, who feel that their genius has never gotten its due,” said NPR critic Maureen Corrigan. “His resentment seeps out between the lines of the recommendation letters he relentlessly writes—or ineptly fills out on computerized questionnaires—urging R.V. parks and paint ball emporiums to hire his graduating English majors for entry-level management positions. Inventive as all these letters are, Schumacher is smart enough to sidestep the danger posed by the inherently static form of a collection of letters; instead, as Fitger’s recommendation letters grow more elaborately unhinged, we learn more about his background, and his character develops beyond the one-note academic burnout case.”

In Dear Committee Members—which the Times called “terrific” and “hilarious”—the protagonist’s office is adjacent to a non-working men’s room. Pipes drip, ceiling tiles collapse, and dust coats every surface as renovations for a swanky new economics department proceed overhead. The book starts out with a letter promoting the one student Fitger believes has talent equal to his own; he implores a vaunted literary residency program to accept the young writer, currently at work on a retelling of Melville’s Bartleby, the Scrivener set in a Nevada brothel. But the student is passed over, and Fitger’s appeals on behalf of his protégé grow increasingly desperate, as if he’s trying to protect the talent that once burned so brightly in himself.

‘Most letters of reference are awfully dull. The weary recipient skims through the “context in which I knew her” paragraph and hunts for specific accolades like a pig after truffles.’Fitger, we learn, was a one-hit wonder whose first novel put him on the map. But subsequent works were thinly veiled airings of his domestic grievances—with his exes still on campus, no less—and his increasingly kooky missives further cement his isolation. “This letter’s purpose is to provide the usual gratuitous language recommending a student, one Gunnar Lang, for a work-study fellowship,” Schumacher writes in an early entry. “Lang—a sophomore with a mop of blond dreadlocks erupting from the top of his head like the yellow coils of an excess brain—tells me that he has applied, unsuccessfully, for this same golden opportunity three times and that this is his final attempt to satisfy our university’s endless requests for redundant documentation. He needs a minimum of eight to ten hours of work-study per week—preferably in the library rather than the slops of food service. Deny him the fellowship and he will undoubtedly turn his hand to something more lucrative, probably hawking illegal substances between the athletic facilities and the Pizza Barn.”

Schumacher is writing what she knows: she says she’s penned hundreds of letters of recommendation over the years. In January, she dissected the process in an essay for The Chronicle of Higher Education entitled “The Gristmill of Praise.” “Most letters of reference, as pieces of writing, are awfully dull,” Schumacher wrote. “The weary recipient skims through the ‘context in which I knew her’ paragraph and hunts for specific accolades like a pig after truffles.”

A Delaware native who majored in Spanish at Oberlin, Schumacher came to the MFA program as a refugee from a dead-end job as a typist. (As she puts it: “Cornell’s creative writing program saved my life.”) Her campus mentors included English professor Stephanie Vaughn, who recalls that her talent made her classmates “want to rush back to their desks and work on their stories.” Schumacher’s first novel—The Body Is Water, about a young English teacher facing an unexpected pregnancy—was a finalist for the PEN/Hemingway Award and the Minnesota Book Award. She also has five young-adult novels to her name, plus a collection of interlinked short stories entitled An Explanation for Chaos.

Schumacher admits she was thrilled to see her book on the Times best seller list in September, when Dear Committee Members stood at number twenty-two for a single, delicious week. “I was so completely happy to be on the list at all,” she says, “that slipping off it could hardly bother me.”

That’s not what Jay Fitger would say.