In 2012, the Cornell Alumni Association announced a new award to recognize achievement by volunteer groups in creating programs that engage alumni and support the University. The following year, the CAA Cup was awarded for the first time, to the Class of 2002. At the most recent Cornell Alumni Leadership Conference (CALC), the award was presented to the Young Alumni Duff Ball Committee, which successfully launched a new tradition for recent graduates. (CALC attendees voted for the winner, choosing from among four finalists; the others were the Cornell clubs of Los Angeles and of Washington, D.C., and the Class of 1963.) CAA received many other strong entries, which reflect the hard work and leadership of alumni volunteers.

In 2008, Jonathan Feldman ’08 had the idea for a prom-like event on campus during Senior Week. It was held in the Engineering College’s Duffield Hall, a fairly new building at the time. To add a community component, proceeds supported the United Way of Tompkins County. Now an annual tradition, the “Duff Ball” brings together seniors for a formal soirée as their Cornell days draw to a close. A couple of years ago, Feldman approached Alumni Affairs’ Student and Young Alumni Programs and suggested creating a Duff Ball for recent graduates. “It would be a nostalgia-building event for young alumni, taking them back to their under grad years,” says Feldman, who now lives in Chicago. “So I knew it could be successful.”

After two years of planning, the first Young Alumni Duff Ball took place in March 2013 at the Bowery Hotel in Manhattan, with more than 400 grads in attendance. The tradition continued this year, with the 2014 ball held on March 1. The event also featured a silent auction, whose items included a tour of the U.S. Supreme Court and a signed Big Red hockey jersey. Proceeds of both soirées bene fitted the Annual Fund for Student and Academic Services. 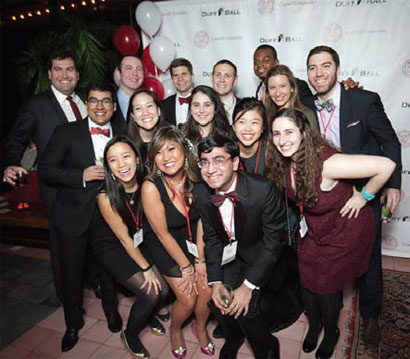 Come autumn, alumni in Southern California know it’s time for the Cornell Club of Los Angeles’s annual scholarship dinner program. Instead of one large gathering, the club has developed a novel idea: a series of dinners at alumni homes and restaurants. “The host subsidizes the entire event,” explains CCLA board member Kim Bixler ’91. “That means 100 percent of the proceeds can go to fund scholarships for local-area Cornell students.” Each host also recruits some type of entertainment— whether it be a belly dancer, a violinist, a talk by a celebrated attorney, cooking classes, or wine tastings. Local alumni are encouraged to sign up online for the dinners, which sell out quickly. Depending on the venue, the events can be as intimate as a meal for ten or as large as a gathering of 200; prices range from $25 to $160. “It becomes a competition among the hosts to create an appealing event to bring out Cornell – ians,” says Bixler. “The sky’s the limit.” She reports that last year, the dinners drew some 400 attendees and raised more than $42,000 for the scholarship fund’s endowment.

Beautiful Music at the CC of D.C.

Last academic year, the Cornell Club of Washington, D.C., collaborated with the University’s student wind ensemble (CU Winds) to plan an inaugural performance trip to the nation’s capital. But the group, overseen by Professor Cynthia Johnston-Turner, wouldn’t just do a concert; the musicians wanted to interact with local students. That’s when club member Bob Day ’56 got involved. He chose two high schools because they’d been recently renovated and were rebuilding their music programs. CU Winds members worked with the students, demonstrating playing techniques and offering an example of what a full wind ensemble can accomplish. The Cornellians also donated reconditioned instruments to the schools.

The visit coincided with D.C.’s annual Cherry Blossom Festival in spring 2013, so Day coordinated a concert on the steps of the Jefferson Memorial. “It’s a great project for the club, it’s a great project for the University, and it’s great to reach out to local schools,” says Day. Like many of the CAA Cup entries, the program can be copied and adapted by other alumni groups. “The key to running a similar event is to figure out how current Cornell students might benefit from an organization’s local area,” says Grace Jean ’00, first vice president of the D.C. club. “Perhaps it’s the history of the city, or the industries that thrive within that community. You need to connect some key players from both sides and watch what unfolds.”

Those were the days: A collection of Class of ’63 memorabilia is on display in the Tatkon Center.

At their 50th Reunion, the Class of 1963 enhanced their commitment to it easy to give through a standard Cornell Annual Fund pledge card.

Since their 45th Reunion, more than 100 classmates have donated to the endowment, with five lead gifts between $20,000 and $25,000. (Most donations have been considerably more modest.) Between their 45th and 50th reunions, the class raised $237,000 for the endowment. In gratitude, the University named a seminar room at the Tatkon Center and a coffeehouse series after the class. 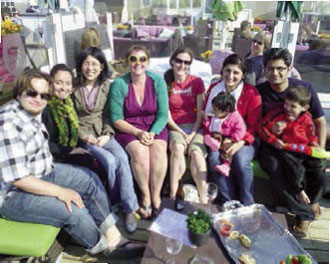 In 2013, the Class of 2002 won the inaugural CAA Cup for its “Non-Reunion Reunion” initiative. The program was part of an effort to keep classmates engaged and reinvest dues by holding gatherings around the country during Reunion weekend. Last year—taking advantage of the fact that some class council members live abroad—the gatherings went international.

The concept is fairly easy to execute: Volunteers in various cities create events—picnics, happy hours, and more—and encourage classmates to attend. Dues help underwrite the activities, based on the number of classmates in each city. Since the Class of 2002 launched the effort, the events have become more and more popular, says president Doug Mitarotonda ’02, PhD ’09. “Hosts who’ve developed a successful model continue to use it,” he says, “reducing work and increasing efficiency.” The class plans to expand the program to include alumni from 2000 to 2010. Says Mitarotonda: “The goal is to continue to grow the Non-Reunion Reunions, drawing in more classmates— and alumni from the decade— year after year, creating bigger and better events.”

Miami, by the Book

Last year, the Cornell Club of Miami asked members to contribute ideas for events via its Facebook page. One that the club thought would attract a diverse group of Cornellians was an alumni book signing. “It was a great way to engage Cornellians on a practical level while highlighting our talented South Florida alumni,” says vice president Belia Peña ’96. The club negotiated with a local bookstore to host the signing, which attracted some fifty alumni ranging in age from their thirties to their fifties—many of whom had never before attended a club event. Grads of other Ivies were also welcome. Peña notes that the success could easily be replicated by other clubs because of the many alumni authors seeking to promote their books, and the appeal of such events for locally owned bookstores. 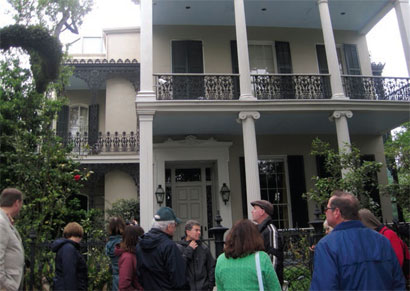 Walking tour: The Class of ’79 trip to New Orleans included forays to the Garden District and French Quarter.

Last year, the Class of 1979 looked for a way to bring classmates together in advance of their 35th Reunion. They decided they wanted to have as many people as possible convene at an appealing, easily accessible destination. They settled on an educational and recreational four-day trip to New Orleans. “We liked the idea of class members traveling as a distinct group to further build community,” says Janet Goldin Rubin ’79, who oversaw the project.

Rubin worked closely with Cornell’s Adult University to develop a program, hosted by ILR professor Nick Salvatore, that included lectures, tours, visits to great restaurants, and other events. (It was the first time that CAU had created a trip for a specific class.) Leaders worked tirelessly to get classmates to sign up—promoting the trip through direct mail, Facebook, LinkedIn, e-mail, and personal contacts. Unfortunately, due to many factors—demanding schedules, having children still at home, the costs involved—many could not participate. However, Rubin says, the class council’s initiative in planning the foray was much appreciated. Twenty people went to New Orleans, she says, and all had a great time. “The trip was a positive experience for the class,” says Goldin, “and a great way to begin building enthusiasm for our reunion in June.”