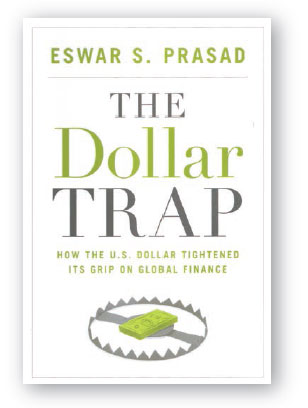 International finance has come to resemble a morality play,” writes Prasad, the Tolani Senior Professor of Trade Policy at Cornell, “but one mostly featuring government mandarins and assorted knaves, with few heroes to speak of.” The global financial crisis and U.S. political dysfunction have raised concerns that the dollar might be dislodged from its position as the world’s leading currency. Contrary to such thinking, Prasad argues that the crisis has strengthened the dollar’s importance for the world economy and concludes that it will remain the dominant reserve currency for many years to come.

Bark by Lorrie Moore, MFA ’82 (Knopf). In her fourth short story collection, Moore combines sharp wit with an eye for the absurd. The narrator of “Thank You for Having Me” observes, “‘Marriage is one long conversation,’ wrote Robert Louis Stevenson. Of course, he died when he was forty-four, so he had no idea how long the conversation could really get to be.” In “Debarking,” a recently divorced man comes to an unsettling realization when he returns to the dating scene. Two stories use classic models: “Referential” pays homage to Nabokov’s “Signs and Symbols,” and “Wings” gives a modern take on Henry James’s The Wings of the Dove.

The End of the Suburbs by Leigh Gallagher ’94 (Portfolio). The effects of the recession hit suburbs hard, but they were already experiencing a tectonic shift. “The housing crisis only concealed something deeper and more profound happening to what we have come to know as American suburbia,” writes Gallagher, an editor at Fortune. “Simply speaking, more and more Americans don’t want to live there anymore.” People are moving back to cities, home valuations have fallen, lower-density development doesn’t yield enough tax revenue to pay for infrastructure, household size is shrinking, and millennials prefer cities (and dislike driving even more).

Horizon by Jenn Reese ’92 (Candlewick). In the post-apocalyptic landscape of the final book of the Above World trilogy, humanity is divided into separate subspecies that view each other with mutual distrust. Aluna and Hoku from the undersea City of Shifting Tides and their Equian and Aviar friends attempt to stop their nemesis, Karl Strand, from conquering the world with his army of technologically enhanced soldiers, the Upgraders. But when Aluna and her friends join a group of Upgraders in an effort to get close to Strand, conflicts threaten to tear their friendship apart and war seems inevitable.

White Man’s Problems by Kevin Morris ’85 (Sweet Devil). In his first collection of short fiction, an entertainment lawyer and co-producer of the musical The Book of Mormon portrays the lives of men baffled to find that the success they’ve worked for fails to live up to their expectations.

Living in the Land of Limbo edited by Carol Levine ’56 (Vanderbilt). An estimated forty-two million Americans now care for an elderly, disabled, or chronically ill adult, notes the director of the United Hospital Fund’s Families and Health Care Project in the introduction to an anthology of poetry and short stories about family caregivers. “Poets and writers of fiction,” she writes, “have much to say about suffering, healing, grief, and the human condition—the essence of caregiving.”

The Black Butterfly by Shirley Vernick ’83 (Cinco Puntos). When Penny spends Christmas break at an old inn on a bleak part of the Maine coast, she encounters first love, a ghost who wants her dead, and some startling family secrets.

Manual for Extinction by Caroline Manring ’04 (National Poetry Review). An assistant professor of creative writing and environmental literature at Hobart and William Smith Colleges explores the connection between humanity and the natural world in her first full-length collection, winner of the National Poetry Review Book Prize.

Subsidizing Democracy by Michael G. Miller, PhD ’10 (Cornell). An assistant professor of political science at the University of Illinois, Springfield, considers how Citizens United v. Federal Election Commission and related court decisions have changed the landscape of campaign finance since 2010 with the advent of super PACs.

The Chief Development Officer by Ronald J. Schiller ’86 (Rowman & Littlefield). The former vice president for alumni relations and development at the University of Chicago talks about how a CDO must not only be a fundraiser but an organizational expert, psychologist, mentor, talent scout, and effective leader.

Sex, or the Unbearable by Lauren Berlant, PhD ’85, and Lee Edelman (Duke). Two theorists of sexuality, politics, and culture discuss how sex causes the contradictory experience of intimacy and estrangement.