On Oscar night, movie star Samuel L. Jackson asked Brian Cullinan ’82 if he’d mind if he snapped his photo. John Travolta joined in, throwing his arm around Cullinan and urging wife Kelly Preston to pose with them. Then another actor—a fellow you may recognize; he played Han Solo and Indiana Jones—jumped into the shot. “It’s funny having those kinds of folks asking if it’s okay to take your picture,” Cullinan observes with a chuckle. But don’t look for the shot on Cullinan’s Instagram. “Sam Jackson has it on his cell phone,” he laments, “so I never got the photo.”

What makes celebrities want a picture of Cullinan? The same thing that had Best Actress nominee Cate Blanchett jokingly try to steal his briefcase on the red carpet. Cullinan is a partner at PricewaterhouseCoopers (PwC), the accounting and assurance firm that has been tallying—and safeguarding—the Academy Award ballots for some eighty years. In the days leading up to Oscar night, only two people—the PwC partners in charge of the process—know who won Tinsel Town’s top prizes. This year, for the first time, Cullinan was one of them. 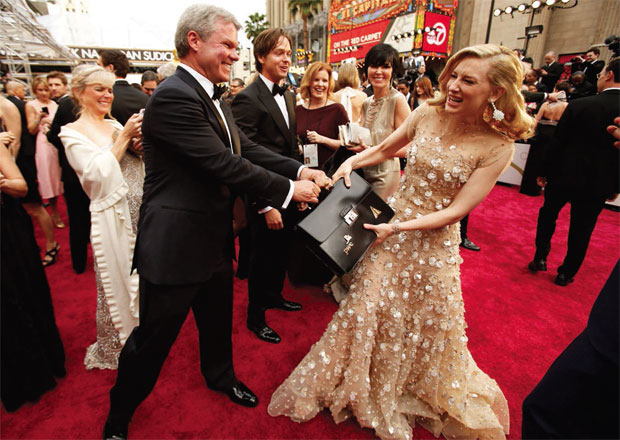 A former psychology major, Cullinan earned an accounting degree from Northeastern before going to work for PwC, where he’s spent his thirty-year career. When invited to co-run the Oscar balloting after his predecessor retired, he jumped at the chance; given that the post has been held by just twelve other partners over the past eight decades, the job doesn’t open up often. For Cullinan and his colleague, Rick Rosas, the weeks leading up to the big night were a whirlwind—overseeing the counting process, staying on top of work for other clients, and giving myriad media interviews. Cullinan appeared on Japanese TV and Irish public radio; the Hollywood Reporter did a photo shoot, complete with hair and makeup.

Although Cullinan can’t reveal how many ballots are cast in the Oscar race, he’ll say this much: there are about 6,000 eligible members of the Academy of Motion Picture Arts and Sciences, and most of them vote. The actual count is done in what Cullinan will only call “an undisclosed location, in quotes.” “It’s a room with no windows, with high-security locks and all kinds of stuff,” he says. “And there’s a room within that room, and within that we have a safe, and within that we have another safe. There’s a ton of redundancy and security built in.”

Voting closes at 5 p.m. Pacific time on the Tuesday before the awards show—and then the count goes into high gear. The team working under Cullinan and Rosas divvies up the various categories so that no one person handles the complete tally in any of the twenty-four categories, ensuring that only the two partners have the final results. The count wraps up on Friday—and for the next forty-eight hours or so, Cullinan is privy to information that millions are keen to glean. “It’s funny how many people say, ‘Come on, just give me a wink and a nod’—but obviously, if we ever disclosed anything we wouldn’t be doing this anymore,” Cullinan says. “My wife said, ‘I’m not even going to ask you.’ And I said, ‘That’s good, so I don’t have to say ‘I can’t tell you.'”

The high-end firm that prints the winners’ names is equally in the dark; it makes cards for all of the nominees. Cullinan and Rosas stuff the gilded envelopes personally, and a complete set goes into each of their briefcases. Then, clad in tuxedos, they travel to the Dolby Theatre in LAPD-guarded SUVs—taking separate routes as a hedge against the city’s notorious traffic. They walk the red carpet, doing media interviews and enjoying a few celebrity encounters—like Cullinan’s comical tussle with Blanchett, which landed their photo in the Los Angeles Times. “She was yanking the bag and I was kidding around, holding it with two hands,” he recalls. “What was interesting is that I knew that in the bag was the envelope saying that she had won Best Actress.”

‘It’s funny how many people say, “Come on, just give me a wink and a nod,”‘ Cullinan says. ‘But obviously, if we ever disclosed anything we wouldn’t be doing this anymore.’During the Oscar ceremony, a partner is stationed in the wings on either side of the stage, handing off the winning envelopes to the celebrity presenters just seconds before they go on. “Everyone who goes out, you’re hanging out with right before,” Cullinan says. “I was standing next to and chit-chatting—it’s mostly small talk—with Brad Pitt, Angelina Jolie, Jennifer Garner, Kate Hudson, Goldie Hawn, Daniel Day-Lewis, Sally Field, Bette Midler, Matthew McConaughey. To see all those people in the course of about an hour—it’s a unique spot to be in.”

Of course, heading up the Oscar balloting is not all tuxedos and Champagne (although the perks do include invitations to the post-show Governors Ball). Cullinan notes that tallying the votes “is not as straightforward as people might guess,” especially for Best Picture. Each year, there can be as many as ten nominees for the top prize, and voters rank each one in order of preference. The counters start by creating separate piles of ballots ranking a particular film first. Then the smallest pile—the film with the fewest number-one votes—is eliminated, with the ballots redistributed according to what was ranked second. The process continues until just one pile remains—but how it got there is something that Cullinan will take to his grave. “When I said that we keep the secret until Sunday, that’s for who won,” he says. “But you never hear how close it was—whether it was one vote apart or 2,000. That’s the secret we always, always keep.”

So was Cullinan happy with the outcome? Having seen all the nominees, does he think that Twelve Years a Slave was indeed the best film of the year? Cullinan demurs. In his business, he notes with a laugh, you don’t play favorites. “Well, I can tell you this,” he offers. “The one with the most votes won.”