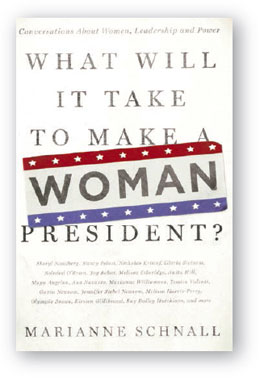 What Will It Take to Make a Woman President?

Women are 50 percent of the population, yet they occupy just a fraction of that in elected office,” writes Schnall, the executive director of Feminist.com. The U.S. ranks seventy-seventh on an international list of women’s participation in national government, and a mere twenty-one of the Fortune 500 CEOs are women. In interviews with politicians, television commentators, writers, artists, and activists, Schnall asks why so few women are in the pipeline for leadership roles in the country and assesses new projects aimed at helping them attain positions of influence.

The Accident by Chris Pavone ’89 (Crown). The worlds of publishing and espionage collide in Pavone’s second novel. When literary agent Isabel Reed receives an anonymous manuscript containing scandalous revelations about a prominent media mogul, little does she realize that it could get one killed. Powerful people will use any means necessary to stop the book’s publication. Hayden Gray, a CIA spy, tries to destroy all copies of the manuscript—and those who possess them. The story moves across Europe and America and reaches into the past where a secret lies buried near a dark road in Upstate New York.

Fukushima by David Lochbaum, Edwin Lyman, PhD ’92, and Susan Q. Stranahan (New Press). The accident at the Fukushima Daiichi nuclear power plant in 2011 showed a nuclear catastrophe playing out in real time. A senior scientist in the Global Security Program of the Union of Concerned Scientists and his co-authors point out the weaknesses in plant design and the flaws in operations and regulatory oversight and give a minute-by-minute account of the heroic efforts to save the plant. They warn that if the nuclear industry does not change its inadequate safety standards, another Fukushima could happen again.

The Monkey’s Voyage by Alan de Queiroz, PhD ’92 (Basic). An evolutionary biologist at the University of Nevada, Reno, recounts the improbable ocean crossings that shaped the history of life. In the Sixties, a generation of biogeographers thought that continental drift explained how plants and animals spread around the world with the breakup of Pangaea, the ancient supercontinent; they disparaged Darwin’s deduction that life could have floated to new locations on mats of vegetation. The use of DNA evidence brought a shift back to Darwin’s idea. “The field of biogeography,” writes de Queiroz, “flipped from landmasses-as-life-rafts and other fragmentation scenarios to something closer to the airline route map.”

Amor & Exile by Nathaniel Hoffman ’99 and Nicole Salgado ’99 (Cordillera West). A journalist and a writer tell the stories of Americans who marry undocumented aliens and get caught up in the legal limbo of border politics. “There is nothing surprising or exotic about an American marrying a foreigner,” they write. “When we hear that some half a million citizens are unable to sponsor their husbands and wives because of where and when they happen to meet, it does not square with our understanding of our immigration system, which is supposed to keep families together.”

To Make Good Again by David Eingorn ’85 (ADS). When the German government presents a last check for reparations on the seventieth anniversary of the liberation of the Dachau concentration camp, two Holocaust survivors pursue a different kind of final accounting.

Mnemosyne: The Long Traverse by Carolyn Clark ’80 (Finishing Line). In her latest collection, Clark reveals the layers of myth and deep time that underlie everyday life.

Hazard or Hardship by Jeffrey Hilgert, PhD ’11 (Cornell). The International Labor Organization estimates that 2.3 million people are killed by work-related injuries and illnesses around the world every year. An assistant professor of industrial relations at the University of Montreal argues that the right to refuse unsafe work should be given greater protection.

Economics for People and Earth by Henk Thomas, PhD ’73, and Manuel Thomas (Social Research Centre). In 1968, a group of people set out to create Auroville, an environmentally sustainable city in southern India. They reforested barren land, planted organic farms, built houses, schools, and health centers, and started businesses. A professor of employment and labor studies and a chartered accountant describe the practices that have guided this cooperative movement for more than forty years.

Every Shot Counts by Mark Broadie ’79 (Gotham). Seeking to better understand golf stats, a professor at the Columbia Business School helped develop the “strokes gained” method for analyzing golf performance, which allows putting, short game, and long game skills to be compared directly with each other.

Deer Hunting in Paris by Paula Young Lee ’86 (Solas House). In an irreverent memoir, a faculty fellow at Tufts University tells how an allergic, vegetarian preacher’s daughter moves from Paris, France, to Paris, Maine, and learns to love hunting and cooking and eating meat.

Samsung Galaxy S 4 For Dummies by Bill Hughes ’82 (Wiley). A market strategist provides step-by-step instructions for managing contacts, browsing the Web, using maps, playing games and music, and finding your way around the features of the Galaxy S 4 smartphone.

Ice Cream Social by Brad Edmondson ’81 (Berrett-Koehler). The former editor-in-chief of American Demographics tells the inside story of Ben & Jerry’s sale to Unilever, how the company tried to keep to its original mission after the corporate takeover, how its principles were compromised, and how the company and the corporation eventually learned to work together to uphold the brand’s integrity.